Fauci turns on Trump to save his own ass 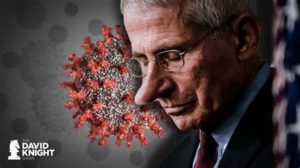 When it comes to COVID Anthony Fauci has taken more positions than can be found in the Kama Sutra. A nice list can be found here. Now he has added one more. This time he’s gone political. Most of us knew that he was a liberal wolf in a non-partisan doctor’s garb and now we’re validated.

On Monday, Dr. Anthony Fauci, chief medical adviser to the White House, said former President Donald Trump had been “poisoning the well” against vaccines for a long time prior to his recent public support of the jab.

Fauci, who is also the director for the National Institute of Allergy and Infectious Diseases, said he was glad Trump expressed support for vaccines, but alluded to how the former president’s earlier mixed signals about the shots contributed toward vaccine hesitancy among Americans.

“Poisoning the well early on about, even not being enthusiastic or outright not pushing vaccines, discouraging vaccines, now has a lingering effect,” Fauci told CNN’s Kaitlan Collins.

He is blaming the person who created Operation Warp Speed for vaccine doubt. Trump was vaccinated in January of 2021.

Moreover, it was not Trump who undermined the vaccines. From Biden down democrats hammered vaccines non-stop in 2020 and could not have been more damaging.

In the months leading up to the election, Democrats repeatedly cast doubt and undermined public confidence in the safety and effectiveness of vaccines produced under the Trump administration.

– Democrats’ dog whistling about vaccines was seized on by anti-vaxxers and led to a rise in vaccine skepticism.

– Joe Biden questioned whether a vaccine would be “real.”

– In August, Biden suggested the vaccines might be unsafe, saying “if and when the vaccine comes, it’s not likely to go through all the tests…and trials that are needed to be done.”

– In September, Biden legitimized those who were questioning the safety of the vaccines, saying, “who’s going to take the shot? Are you going to be the first one to say sign me up?”

– Days later, then-Biden Press Secretary Symone Sanders repeatedly refused to say whether Biden would take the COVID vaccine if it was approved before election day.

– A week later, Biden said the American people “should not have confidence” in the vaccine unless it met his campaign’s specific criteria.

– In September, Kamala Harris refused to say whether she would take a vaccine approved before Election Day: “I think that’s going to be an issue for all of us.”

– Harris said that scientists would not have the “last word” in approving the vaccine, and suggested a vaccine may not be effective.

– Ron Klain, now White House Chief of Staff, tweeted: “When you read how Team Trump played politics with testing it makes you wonder how they will handle vaccines?”


Governor Andrew Cuomo (D-NY), in October: “I believe all across the country you’re going to need someone other than this FDA and this CDC saying it’s safe.”

Cuomo said he was “not that confident” in the FDA’s approval process for a COVID-19 vaccine and that Americans “should be” “skeptical” about a vaccine.

“We can’t trust the President and take his word, and take a vaccine that might cause harm to us.”

democrats even initiated a probe into Warp Speed so as to harm Trump.

Now let’s do something that should be done far more often- take Fauci’s words and shove them down his throat.

Dr. Fauci Says Trump Has Listened to His Recommendations and He’s Not Being Forced to Say So

Fauci Says Trump Actually Listened To Him About Coronavirus Mitigation

Fauci says Trump listened to his advice about coronavirus mitigation

Fauci says Trump listens to him without exception.

We come to Fauci’s  biggest lie of all

Fauci wants mandatory vaccination for all air travelers despite saying it won’t make anyone safer.

To say Anthony Fauci is mendacious is to grossly understate things as I have pointed out multiple times. He will crawl into protective political niches as the need arises, truth be damned.

If you wondered whether Anthony Fauci was a dishonest political hack, wonder no more.