Jussie Smollett wasn’t the only one found guilty 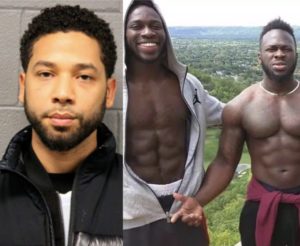 Yesterday Jussie Smollett was found guilty of faking a hate crime and lying to police but he was not alone in his guilt. Far from it. Although hardly the only one, I had this figured out quickly and posted it nearly three years ago.

What were the odds of two MAGA hat wearing Trump supporters would be outside a Chicago restaurant at 2 am with a wind chill of -40 waiting for Smollett? Despite my cynicism, I said nothing. I wanted to wait for the facts to get sorted out. Liberals, however, had no interest in the truth.

Last night I set about collecting the ridiculous things said about Smollett but soon realized that I had already posted most of them back then. Nonetheless, it’s worth revisiting. Let’s start from the top down

What happened today to @JussieSmollett must never be tolerated in this country. We must stand up and demand that we no longer give this hate safe harbor; that homophobia and racism have no place on our streets or in our hearts. We are with you, Jussie. https://t.co/o8ilPu68CM

.@JussieSmollett is one of the kindest, most gentle human beings I know. I’m praying for his quick recovery.

This was an attempted modern day lynching. No one should have to fear for their life because of their sexuality or color of their skin. We must confront this hate.

Jussie is my friend – a very talented & beautiful human being. It is so hurtful that homophobic haters would dare hurt someone so loving and giving. I’m dedicated to finding the culprits and bringing them to justice. Jussie did not deserve to be harmed by anyone!

Yamiche Alcindor, the activist masquerading as a “reporter” who recetly left NPR for NBC

Perhaps no tweet exemplifies media re: Smollett more than this from @Yamiche of PBS. She attributes the report to TMZ, but adds “We have to do better as a country. This is disgusting.”

The media must take this misstep seriously and not dismiss it. Be humble, and get better. 8/ pic.twitter.com/oBasCwptfS

Disgusting? Yes, but not for reason she originally had

And of course, little editorializing that is now the norm within many journalistic outlets looks awful in retrospect. Here, @BrookeBCNN closes an objective segment by noting “This is America in 2019.” 7/ https://t.co/f4OpYR3l9Q

Another media error was in the instant analysis. Here, @washingtonpost tweets that Smollett “was assaulted.” But also, follows up with an opinion piece (but tweeted from their main account): “The Jussie Smollett attack highlights the hate black gay Americans face”. 5/ pic.twitter.com/xx4RgmMfeb

The headlines and chyrons of CNN, NBC News and CBS News from day 1 all clearly take, as fact, that an attack happened . The question raised was only if it was a hate crime. 2/ pic.twitter.com/qkOWBL57jb

See it all here

There is another epic thread here. Some of the guilty have deleted their tweets. This one was deleted but the archive remembers all and Rosie Memos saved it. 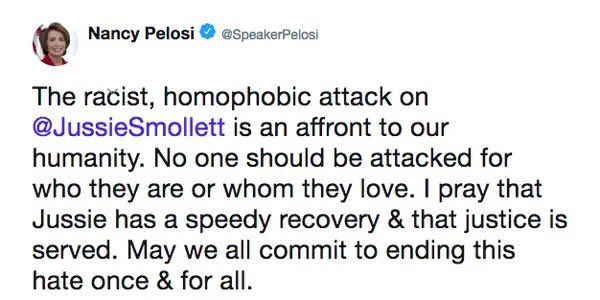 Jussie Smollett, on trial for allegedly staging a hate crime against himself, testified Monday that he had correspondence with CNN’s Don Lemon during the early parts of the Chicago Police Department’s (CPD) investigation into the incident.

Smollett, 39, testified that he received a text from Lemon, supposedly relaying information that the CPD didn’t believe Smollett’s account of what happened, Fox News’ Matt Finn reported from the Windy City courthouse.

There was also much humor 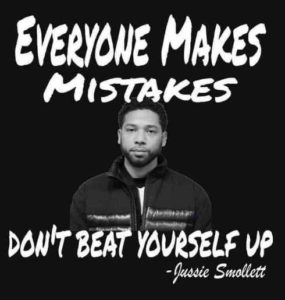 He’s absolutely right. Smollett, for his own selfish reasons, made a mockery of race relations and gay rights. Again, he wasn’t the only one guilty. The leftist media is also guilty- of malpractice and malfeasance on grand scale. Biden and Harris once again proved just how inept they are. 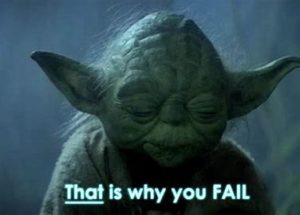 MSNBC made no mention of this in prime time. In an astonishing display of denial BLM continues to stand with Smollett.

Black Lives Matter is backing Jussie Smollett — who’s on trial for allegedly staging a hate crime attack — because “we can never believe the police,” a founder of the movement said in a statement.

“As abolitionists, we approach situations of injustice with love and align ourselves with our community,” Dr. Melina Abdullah, director of BLM Grassroots and co-founder of BLM Los Angeles, said in a Tuesday statement.

And that tells you all need to know about BLM.

This was an outrageous incident which morphed into an incredible spectacle. The leftist media needs to account for its malpractice. A lot of politicians need to explain their stupidity. They’re as guilty as Smollett.  If they choose to deflect and avoid their massive delusions they will have lost all credibility. if you listen carefully, you can hear them all singing:

I can’t wait for Jen Psaki to face Peter Doocy.

Don’t worry. Kim Foxx and Michael Obama will see to it that he gets off easy.

We’ve got to talk about the Jussie Smollett case.

I know it can seem easy to laugh or shrug off. But it’s instructive in why so many people don’t trust the corporate press and the Dems & commentators who help drive it.

Are we waiting for the apologies to pour in now? He scammed all the Lib racists, now what? What about the fake DA that turned him in to start with?

1. Every race-baiting hoax intended to increase division, hate and incite violence comes from the left.

2. Every time, the entire left falls for every hoax, full-throttle, unabated and unreservedly. They fall for them because they WANT to believe the worst and NEED something to fuel the hatred they feel.

3. Even though every leftist hate-hoax follows the same course, the left NEVER learns and chooses caution and research before promoting the NEXT hateful hoax.

4. The left NEVER apologizes or is held accountable.

Recall when the moronic pres. who’s brain is powered by 6 guinea pig, stated in the beginning of this hoax ” We are behind you”. Correct! the press, the wipe house, big tech ceo’s all suffer from an inferior and limited mental capacity. It is called “group thinking” where in the individual surrenders all personal beliefs for the “crowd”. Gustave Le Bon penned a seminal work “The Crowd A Study of the Popular Mind”. Very good read and packed with amazing information of the “crowd”.

Totalitarians rely on that for their power grab. It’s one of the reasons critical thinking skills aren’t emphasized in our “educational system” and teaching of the scientific method has gone out the door in favor of teaching how your “feelings” are fact.

REMINDER: One Possible Reason Why Jussie Smollett Created His Hate Hoax Is Connected to Cory Booker, Kamala Harris and Others

Now that Jussie Smollett has been found guilty of crimes, should we step back and ask what this was all about?
John Kass News had questions after the Smottett verdict:

I ask you, cui bono, who profits by not speaking of Smollett again? Who profits by pretending this didn’t happen?

The politicians who joined him in screaming about hate crimes and lynching. And media that carried Smollett’s hateful and dangerous hoax. They profit by your forgetting.

Kass is right. One question that remains open is why did the event ever occur? After listing the responses from top Democrats from Joe Biden to Elizabeth (Pocahontas) Warren on the initial fake event, Matt Margolis at PJMedia shared:

In addition to top Democrats, many in Hollywood fell over each other to virtue signal their anti-racism and anti-homophobia with tweets supporting Smollett and condemning hatred. These people refused to see the absurdity of his story and instead let it validate their negative attitudes about this country and Trump supporters.

It’s no mistake that those of us on the right saw through Smollett’s story, as did a jury of his peers, while the left fell for it hook, line, and sinker. The left always wants to believe the worst of this country and the worst of Trump and his supporters.

The left wants us to believe this country is racist, yet it seems like so many of these high-profile hate crimes turn out to be hoaxes. Why is that? Jussie Smollett may have thought he would revive his career with this stunt, but why do so many others fake these hate crimes too?
As for the aforementioned Democrats and the many others who made similar statements, will they now admit Jussie Smollett made them look like fools?

Don’t count on it.

Nope, the left is ready to move on. But still, the one item that remains is, ‘why did he do it?’

One observation is that Smollett was reacting to other events at the time. At the time of Jussie’s fake event, a bill was being pushed in the Senate which would add prison time for an attack by two whites on a black but if two blacks attack a white, the charge will be standard (assault but not a hate crime). Here’s a link to the bill. It made a crime more serious if at least two whites attack a black person, claiming that the black victim will be reminded of the time of lynchings.

After Smollet attacked himself and posted a video of himself with a rope around his neck, (and blamed two white Trump supporters), both Cory Booker and Kamala Harris used that attack to generate support for their bill. Here’s a picture of their tweets. We were all over this at the time:

Here’s an updated composite from Yaacov Apelbaum related to the Smollett case: How many Democrats did it take to put together the Jussie Smollet hoax?

When it comes to CNN its Faking News not Breaking News