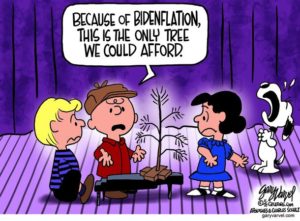 Welcome back to Day 318 of the Sh*tz & Gigglez* occupation! Hard to believe it’s already December – let’s get tto the Leftist crazy:

I normally don’t include such heavily covered stories, but this post gives better insight as to what actually happened than most of what you (and I) have read about what happened with The Salvation Army.

Written in 1995. Guess how the story turns out. Go ahead, take a guess!

Our upper class has migrated allowing our poorest neighborhoods to be terrorized to that terrorism reaching to upper middle class neighborhoods. I’d like to adopt a new term that we all must work to spread – “Trickle Down Terrorism”

Friendly advice to Lefties: Feel free to idolize thieves and rapists, but don’t be surprised when it turns off the Normals

The same people who howled, “Trump is weaponizing space!” will be first ones shrieking when the satellite that broadcasts the latest episode of The Handsmaid Tale to their phones gets taken out

If I were to hit the lottery, one of the first things I’d do is buy a few homes in ritzy neighborhoods that vote Dem and invite squadrons of released criminals & homeless to shack up in said homes

salvation army has always been communist in beliefs. malls use to charge them for space and time.. kick backs were early in the game. very little of the monies collected go to alleged charities. “administrative fees’ physical fees, and associate fees contribute 72-75% of all monies collected

Its wonderful to know part of my last years donation went to pay for the International Social Justice committee of the Salvation Army. The local chapter quickly disavowed the released demand for apology, when more than a few whites called to apologize and not donate.
Dedicated to the International SJ warriors https://www.youtube.com/watch?v=gTLQ7HWpgxo

Perfect song for this story!

As someone who knows a few insiders, Salvation Army is actually one of the better charities in terms of most of your contributions going to direct aid.
They have other issues, as seen here, but $ getting to those in need isn’t one of them

They need to screen the over educated SJW homeless they take in you dont have to create a job for them, especially when they reek of small business smoke.
Tell me when they downsize the Antifa from the ranks.