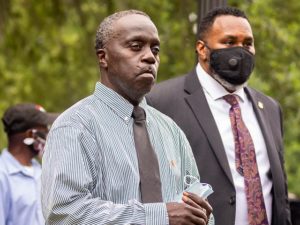 Two high profile trials concluded recently and in my opinion both verdicts were just. In the second the killers of Ahmaud Arbery were convicted of murder. I felt from the beginning that the killers were wrong and they deserved to be convicted. Subsequently and to his great credit, Marcus Arbery, the father of Ahmaud Arbery, crushed the basic racist premise of Black Lives Matter. He said

“For real, all life matters. Not just black children, we don’t want to see nobody go through this.”

I don’t want to see no daddy to watch his kid get shot down like that. It’s all our problem. So let’s keep fighting. Let’s keep doing it and making this a better place for all human beings. All human beings. Love everybody! All human beings need to be treated equally. Today is a good day.

Those are wise and noble words. Everyone ought to embrace them.

Yet there are those who argue that Mr. Arbery is a racist.

Maybe You Mean Well, but This Is Why You Shouldn’t Say “All Lives Matter”

When you say, “all lives matter,” assuming the best intent on your part, you’re probably trying to communicate a genuine personal belief that you value all human life equally. And that may even be true, but it also means you are failing to see the ways our society and systems show Black people that their lives, livelihoods, and well-being are not valued equally.

Is the “All Lives Matter” Slogan Racist?

If you consider yourself the type of person who is not racist, there are good reasons to stop using the All Lives Matter expression. First, Blacks find it offensive, and if you’re genuinely not racist, stop saying something that Blacks consider offensive. Second, stop providing the cover and legitimacy for bigots by socially validating the expression yourself.

I want you to note immediately that just about all, if not all of the above are written by white liberals. I have not yet heard a single white liberal (or anyone else for that matter) scold Mr. Arbery and tell him that he is a racist, or at least an “accidental racist.” No one has told him that he’s wrong.

Because he isn’t wrong.

All lives do matter. No one should ever lose a child to murder no matter color. The media has taken a strong interest in this case because it was a white on black crime. They have zero interest in black on white crimes or black on black crimes. Through some kind of mental Jiu Jitsu the media turns white on white crime into a racial issue. The media ignores completely the lives lost every week in Chicago. More children have been shot in 2021 than have died from COVID in the Windy City. A few days ago a Mom who lost her son to a shooting was herself killed in the same spot.

CNN and MSNBC are full of really sick people. They really don’t give a damn about black lives or the lives of children. They seize on everything to use as a cudgel on those who have a different world view from the incessant hatred they cough up and spit every minute. Watch this black on black racism on MSNBC

“There is a black mouth moving but a white idea running on the runway of the tongue of a figure who justifies and legitimates the white supremacist practices.” pic.twitter.com/P3O8ciTveG

“Every night she spews hatred against white people,” she wrote. “Who knows what pathology drives her, but it’s not healthy, for her or any of her dwindling audience. Shame on MSNBC for elevating such a hate-filled racist to prime time. She has zero charisma….But for some unfathomable reason, she has Teflon protection at the network, even after being caught with homophobic and anti-Semitic comments on her blog.

Neither she nor Dyson give a damn about anyone. CNN and MSNBC thrive on hate and hate permeates them. It’s all they have. The worst possible thing that could befall CNN and MSNBC would be for racial hatred to end and thus they continue to stoke the fires of enmity.

Newsweek also does not want racism to fade. They tried to argue that Marcus Arbery did not say what he said:

Outside a Georgia courthouse on Wednesday, the father of Ahmaud Arbery spoke to the press after three men were convicted of murdering his son.

Some outlets and reporters have misquoted Marcus Arbery Sr., however, suggesting he used a controversial slogan that is associated with criticism of the Black Lives Matter movement.

What he actually said was “all life matter” as he spoke about not wanting another family to lose a child the way he had lost his son.

This is galactically stupid. “All life” includes all lives. As long as we’re splitting infinitives, we’re editorializing remarks, Mr. Arbery said “all life matters” not “all life matter.” Going through the author’s Twitter feed one sees that she noted the Abery trial but had nothing at all to say about Darrell Brooks, which tells you all you need to know about her.

Mr. Arbery is right. All lives matter. The sooner that takes hold the better off everyone will be. This country does not need more or continued grammatical apartheid. Hopefully out of the Arberys’ painful loss some good will come.