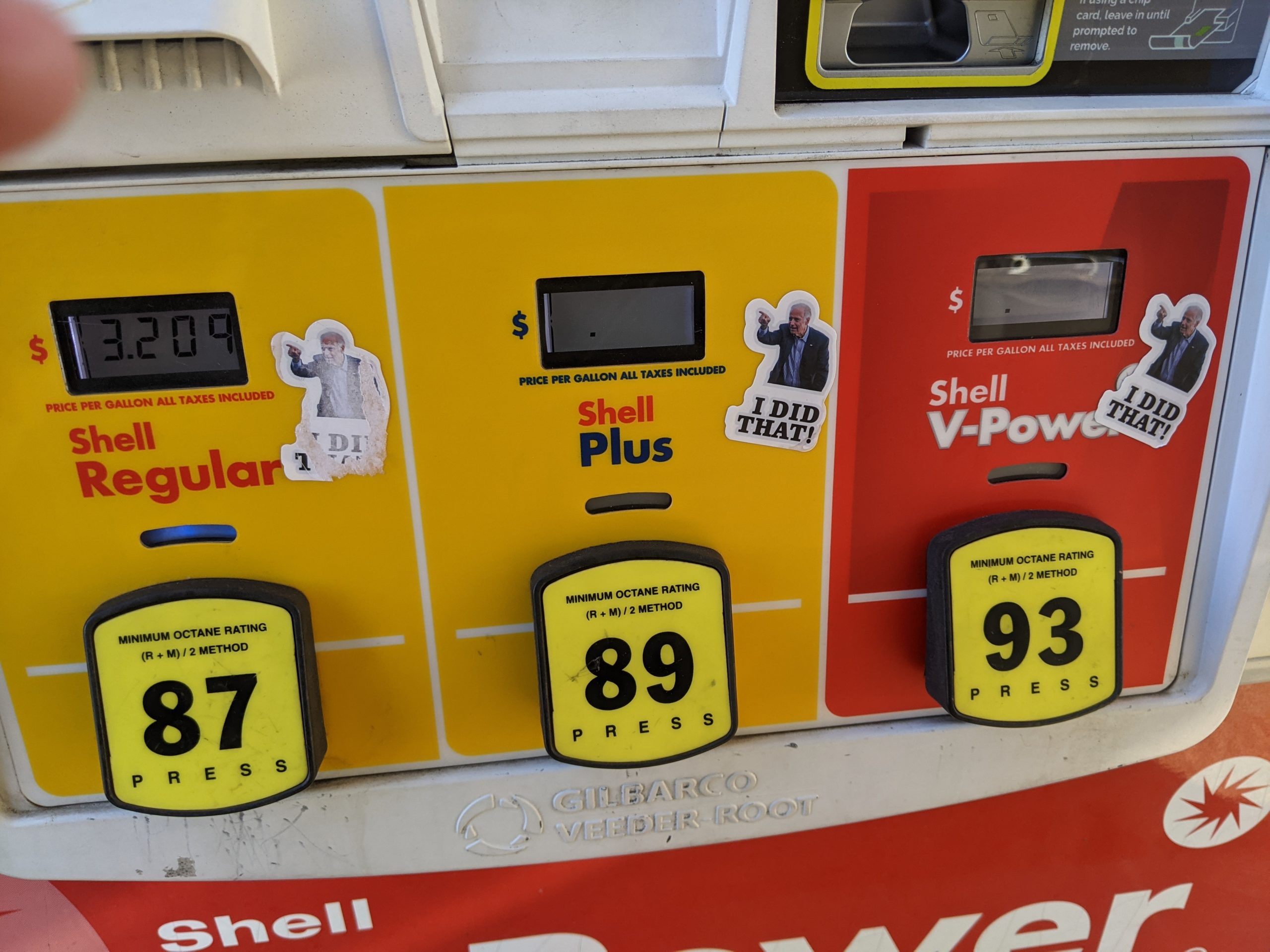 Welcome back to Day 311 of the President I Did That* occupation. The header image in this post is a pic I took when I was fueling up the other day here in Deep Blue Northern Virginia. I like how it looks like someone tried to scrape away the first sticker. On to the post – I hope everyone had a great Thanksgiving, and we’re having a light post this week.

11/19 – OSHA Mandate May Be Stalled, But Other Mandates Are About To Suffocate Economic Activity

11/21 – It’s Thanksgiving Week And The Natives Are Restless

Thank goodness Biden saved us 16 cents on the Fourth of July. https://t.co/sm27eANhJS

“11/19 – OSHA Mandate May Be Stalled, But Other Mandates Are About To Suffocate Economic Activity” Worse than the mandates are those “people” who cheer the firing of those who, for whatever reason, don’t want to take the vaccine. They are vile and despicable.

“11/19 – Is Banning Native American Team Names Discriminatory?” I can understand Native Americans being embarrassed by one of the Redskin’s extended periods of suck, but the purpose of using Native American images as sports mascots is because it is the image of fierce and dedicated warriors. But since Washington cannot seem to settle on a new name, recent events suggests one. They can be called the “Washington Protester Beaters and Imprisoners”. Their logo could be the swastika.

“11/20 – FBI Jackboots Break Down Door and Raid Home of America’s Mom” Time was that a “community organizer” was an honored profession. Not anymore? Perhaps her error was having her photo shown. The name “Sherronna” could have been assumed to be of a black woman and, thus, immune from persecution. Rachel Dolezal says, “Oh, HELL yeah!”

“11/21 – It’s Thanksgiving Week And The Natives Are Restless” The historic account proves this, like the “1619 Project” to be based completely on lies. Though the historic details might be a bit embellished, what is wrong with a story of two vastly different cultures coming together in peace and thankfulness? Well, the problem is this contradicts the goal of the left; they want to have people at each other’s throats, divisive, hateful, racist and, when all those elements come together in the proper proportions, violent.

“11/22 – If the Vaccines Work, Why Aren’t They Working?” The vaccines worked against the original virus. Otherwise, as people were vaccinated and resumed their normal lives, we would have seen a spike in cases instead of a reduction. But the vaccine’s effectiveness wanes over time and is not as effective against the variants. The problem is, this idiot regime doesn’t seem to care to adjust to the need and embrace the effective treatments. Instead, they cling to the vaccines that are now less effective. They don’t care about protecting the public; they need to epidemic to continue to use the fear of in-person voting to allow them to reprise their 2020 election fraud campaign.

“11/23 – The Cruel Lesson to Learn from Austria’s COVID Vax Insanity” It’s odd how some people can blame everyone but the CCP for the virus and deaths. Those who so easily surrender their individual rights cannot stand those who hold theirs dear. They are the same who think censorship and suppression of civil rights is funny while it’s happening to others. Oh… your Cruel lessons and Waukesha mass killing links are swapped.

“11/24 – Waukesha Mass Killing Suspect The Latest Violent Criminal Unchecked By Soft-On-Crime DA” Well, did the left learn their lesson from releasing violent illegal immigrant criminals back into the population just to spite ICE? Well, no… they didn’t.

“11/25 – Joe Biden coddles another terrorist group — and Florida’s Democrats are screaming” Gotta make room on the Terrorist Watch List for more domestic terrorists, like those who fly US flags at their homes or pick up trash in their cities. Maybe the supply of illegal immigrants from Columbia is falling off so idiot Biden needs to provide a little incentive.

“11/26 – ‘Every major Australian city within range of Chinese missiles’: Peter Dutton issues stark warning” I hope no one is counting on US help anymore. Idiot Biden has shown making the US weak, uninterested and unable to intercede to prevent foreign conflicts and aggression is his (Obama’s, Soros’, the CCP’s) primary goal.

Oh yes Waukesha where according to Wapoop an SUV decided to join a parade.

Yahoo catagorizes the “correction” under ENTERTAINMENT?
These people are sick!

We have these stickers all around town here.