President Lite Kamala and Jill Rumble in the Jungle! 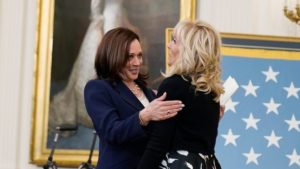 A picture is definately worth a thousand words and this drama scene of Kamala and Jill Biden “hugging it out,” speak volumes about their genuine dislike for each other.  You can almost feel the hostility radiating from the picture and burning your retinas.  Jill looks like she is going to head butt Kamala into next week.  It probably started way back on the campaign trail during the debate, when Kamala affectionally referred to Jill’s husband in front of millions of viewers as  “basically a racist.”  Yeah, Jill didn’t appreciate that disparaging remark and in a gentle, soft, thoughtful, manner, confronted Kamala (mano a mano) after the debate and lovingly said, “Go f–k yourself!” Ouch.  That dustup was destined to leave a permanent mark on their relationship.  I know very little about women (most men are clueless) but we can agree that:

Ironically, Kamala became the first female U.S. president in 244 years when Joe Biden was under anesthesia during a colonoscopy examination.  Her reign as president lasted 85 minutes which was 20 minutes longer than the attack on Pearl Harbor (65 minutes from 7:55 a.m. until 9:00 a.m.).  Kamala proudly wore the king’s crown and may have face timed Jill and with a twinkle in her eye whispered, “Jill, I insist that you refer to me as Madam President!”  Jill may or may not have responded by saying, “You will never, ever be president! When the anesthesia wears off, Joe will be as sharp and focused and cognitively healthy as ever.”  Kamala cackled and that’s when the fight started.  President ‘Lite’ Kamala probably should have stopped there but then she just started singing her favorite Linda Clifford song at the top of her voice: “If My Friends Could See Me Now!”

If they could see me now
That old gang of mine
I’m, eating fancy chow
And drinking fancy wine
I’d like those stumble bums
To see for a fact
The kind of top drawer
First rate chums I attract

Apparently, Jill is not the only one who dislikes Kamala.  There is a rumor floating around that some Democrats are banding together and surreptitiously plotting to remove Kamala and install a new VP, through back door shenanigans.  In kitchens all across American, Democrats are carving their turkeys and conspiring to carve up Kamala.

Backstabbing a VP is certainly not the American way but their dastardly plan is afoot.  It should be entertaining to watch Democrats mock, malign, destroy and demonize a young, black, liberal, woman who made history by cracking the glass ceiling in the swamp of Washington DC.  Dems are sharpening their knives because they find her laugh annoying and believe the lame stream media’s prediction that she is not presidential timber-whatever that means.

Kamala Harris served the Dems faithfully by helping them win a presidential election, which should count for something.  Unfortunately for Kamala, Dems are asking, “What have you done for us lately?” Her shelf life has expired and she has become expendable.  Critics want her discarded like three day old fetid seafood, wrapped in the editorial page of the New York Times.

I am defintely NOT a fan of  Biden/Harris but I am mortified to watch a young woman’s life destroyed in order to feed the Democratic machine.  I hope that Kamala remembers Jill Biden’s mean comment and shouts out loud and proud and often, “HEY DEMOCRATS, GO F–K YOURSELVES!”