Tony Evers should be on trial, not Kyle Rittenhouse 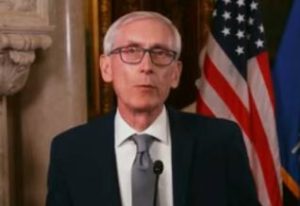 Gov. Tony Evers (D-idiot) of Wisconsin has mobilized 500 members of the National Guard prior to the verdict delivery in the Kyle Rittenhouse case. This is a classic case of too little, too late. Evers should be charged with being an accessory to murder. IMO he is a criminal.

The Rittenhouse case is a classic example of an attempted lynching. The media has misrepresented, distorted and outright lied about what happened. Think Nicholas Sandmann or Jussie Smollett. Rep. Hakeem Jeffries (D-Moron) wants Rittenhouse locked up and the keys thrown away. The American system of justice is not needed.  The prosecutors are buffoons. Andrew Sullivan:

Money quote from the defense lawyer: “It wasn’t until you pointed your gun at him, advanced on him, with your gun (and your hands down) pointed at him, that he fired? Right?” To which Grosskreutz answered:

“Correct.” Here’s how the NYT first described this a year ago, on August 26: “Video footage from the scene of the shooting appears to show Mr. Rittenhouse running and then firing his gun, striking a man in the head. He then flees and is chased by bystanders before tripping, falling to the ground and shooting another man.”

A day later, in another NYT piece (which I relied on at the time), here’s the account of video footage they embedded: “As Mr. Rittenhouse is running, he trips and falls to the ground. He fires four shots as three people rush toward him. One person appears to be hit in the chest and falls to the ground. Another, who is carrying a handgun [Grosskreutz], is hit in the arm and runs away.” Any sense of self-defense there? (And when you watch the full version of the same video on YouTube, you see that, for some reason, the NYT cut off the key moment showing Rittenhouse’s self-defense — the moment that proved so critical in court!)

I’ve watched every second of every video of the events in Kenosha. Kyle Rittenhouse was running away from Joseph Rosenbaum. Rosenbaum was violent that night and repeatedly threatened to kill Rittenhouse. It was only when Rittenhouse came to a parking lot he had no where to go that he turned around. Rosenbaum then lunged for the weapon and Rittenhouse fired.

Later Rittenhouse was being chased down the street again as he wants to contact the police when he tripped and fell. Immediately one loon jumps into the air and kicks Rittenhouse in the head. For his trouble he limps away with a strained ankle. Then Anthony Huber smashes Rittenhouse on the head with a skateboard and tries to take Rittenhouse’s weapon from him. Only then does Rittenhouse shoot him. Then comes Grosskreutz.

Much is made of Rittenhouse “crossing state lines” by the left wing media as though it was some kind of a crime. There were reasons Rittenhouse was there.

Was this reported ANYWHERE before the trial?

Curiously, no major media chain reported this, nor were they interested in any facts that might divert attention from their malicious predetermined effort to destroy Rittenhouse. CBS described Rittenhouse as a murderer despite a lack of a conviction. Some of them even called this a racial killing despite the victims being white. This has been a giant media clusterf**k. It is absolute malpractice.

This is a classic case of self-defense. Knowing they’re going to lose, the cretin prosecutors now are looking for lesser charges to pile on Rittenhouse. I find that offensive. They should NOT be able to do this now.

Now to Evers. Evers initially sent 125 National Guard troops to Kenosha. The next day he doubled it to 250 and refused Trump’s offer to send thousands more from adjacent states. Once the riots broke out Evers agreed to Trump’s offer but it was too late. Two were dead and the riots resulted in $50 million in damages.

Had Evers accepted the Trump’s offer there likely would have been far less damage and very possibly no deaths. But Evers has no regrets about any of it.

Evers is the one who should be trial, not Kyle Rittenhouse.

[…] post Tony Evers should be on trial, not Kyle Rittenhouse appeared first on Flopping […]

The media wants nothing more than a guilty conviction. An aquittal destroys the anti gun narrative.

Good guys with a gun will always protect themselves as well as others and this flys in the face of the anti gun movement.

Funny… Rittenhouse is the “racist” but the guy he shot and the left idolizes was dropping the N-bombs at Rittenhouse. It’s pretty easy to see where leftist sentiment lay.

Democrats created the problems then want to hold others accountable for the results. As always.

[…] Tony Evers Should Be on Trial, Not Kyle Rittenhouse […]

If you watch the footage available in chronological order you learn that Rittenhouse was struck by the skateboard twice.
The first time he was hit in the throat, it made him dizzy and
light-headed which caused him to fall.
Then, he was also hit again with the skateboard after he was down.

If you’ve followed the trial you learned that yesterday the prosecution tried to get fake footage admitted that appears to show Rittenhouse aiming at a man before he was attacked.
Jack Posebiac (sp?) examined this footage and realized two major faults with it:
1. It was taken at such a distance that pixels were added to fill in blanks. (Should be inadmissable.)
2. Those pixels made it look like Rittenhouse turned left-handed and aimed a gun, but body heat footage showed it was just his left arm pointing somewhere. (Easily impeached IF the prosecutor actually tries to rely on it.)

So, should Tony Evers be on trial?
He certainly stood the police, fire and paramedics down those nights.
Responsible people with ties to the community stood with their local business owners trying to protect their livlihoods.
Irresponsible people cause hundreds of millions in damages so they could loot.
One must wonder who Tony Evers would be protecting from whom.

We have many knick names for our come ahead from behind after midnight Governor. One term Tony, Skelator and others not so family freindly .Ive posted his asshat statement he put out 5 seconds after the police officer stopped the rapist from stealing a car full of children while armed with a knife.
The twitter , MSM mob and hyper libs are prosecuting the very act of self defense. In Grettas words “How Dare You.”
What good is the 2nd if you are not allowed to defend yourself?
As you mat have heard the DA wants to negotiate charges, ummm shouldnt that be done before you know you failed at proving the ones you pressed?

Shall we prosecute the prosecutor?

EXCLUSIVE: Potential Witness Tampering as Gaige Grosskreutz, the Felon Who Aimed His Gun at Kyle Rittenhouse, Had Two Prior Charges Dismissed by Prosecutors Only Days Before Trial

When liberal governments spoon with anarchists this is the result. Garland and the FBI belong in prison.

[…] has been made of why Kyle Rittenhouse was in Kenosha and he had good reasons to be there. Grosskreutz lives in West Allis, WI– 50 miles from Kenosha. He had no reason to be […]

[…] has been made of why Kyle Rittenhouse was in Kenosha and he had good reasons to be there. Grosskreutz lives in West Allis, WI– 50 miles from Kenosha. He had no reason to […]