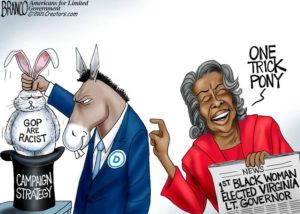 Welcome to Day 297 of the Poopypants* occupation! Let’s get straight to it!

Short post, and read to the end. Conservative Treehouse nails the point that whenever The Radical Left suffers a major loss at the ballot box, (think 2010) instead of asking what they did wrong they fly into a rage and basically lash out in the nastiest ways possible. Think of this as a preview for 2022

Remember folks, when things go south the truckers will get blamed for the fallout of Brandon’s* idiotic mandate

11/6 – INCLUDED IN FAUX INFRASTRUCTURE BILL: BREATHALYZERS IN ALL NEW CARS

If ever there were a rule that Congress will exempt itself from, this would be it

11/8 – Los Angeles has gone loco with its vaccine mandate

I can’t rememberr who pointed this out, but last Tuesday it was far easier to vote in Georgia than it was to eat in Los Angeles

11/9 – Illinois Governor Replaces God with Self, Wipes Out Religious Objection to Vax

11/10 – If The Left Ends Parent Rights, You Might Need A License To Raise Your Own Child

Remember folks, today’s “Nah, that’s just some bat (guano) crazy talk!” of today will go on to become part of the DNC’s national platform in 20 years. If you don’t believe me, it only took 20 years to go from “We just want to get married and treaated equally!” to the party covering up raping chidren openly advocating drugging & mutilating them.

In looking at Omarova’s nomination and everything else this administration has done, from the border to Kabul to the supported terrorists, including Iranians, receiving de facto permission to build their atomic bomb, I believe we are forced into one inescapable conclusion: the Biden/Harris administration’s actions are not the result of ineptitude. They are a carefully thought out, well-planned, and almost flawlessly executed plan to ensure the destruction of the United States as we know her. It is being viciously implemented by Obama acolytes such as Susan Rice and hundreds of others who are the people really running our country under the Biden administration

The Radical Left going back on their word? I am shocked! SHOCKED, I say!

The left reacting to their losses last night pic.twitter.com/Sy3qtk67lz

I’m amused at all the leftists asking what legitimate business #KyleRittenhouse had in Kenosha. I would pose exactly the same question about the looters, rioters and arsonists

When I saw this story the lyrics to “Welcome Back Kotter” started running through mt head, only substituting “Carter” for “Kotter”

“11/5 – FBI Raids Homes of Project Veritas Journalists – James O’Keefe Reveals Details of DOJ Targeting and Coordination With New York Times” Hmm… just like CNN knowing about the raid on Stone’s home. It also seems the NYT got ahold of some of the information that was on O’Keefe’s phone that the FBI confiscated. I’m just glad the FBI and DOJ are not weaponized by the White House like that mean old Orange Man did, but never presented itself.

“11/6 – INCLUDED IN FAUX INFRASTRUCTURE BILL: BREATHALYZERS IN ALL NEW CARS” Won’t most cars be self-driving by the time this goes into effect? I wonder if they will be programmed to be disabled by speaking Spanish? The left never seems to be concerned by the rash of drunk-driving illegal immigrants.

“11/7 – Unseen Footage Of Protestors Storming Federal Buildings.” This incompetent regime punishes these protesters by doing exactly what they demanded; shut down Line 5 (which is under serious consideration, which means the idiots will do it). That’ll show em. That should put a stop to other protests like this.

“11/8 – Los Angeles has gone loco with its vaccine mandate” Why don’t they mandate showing proof of vaccination to go to get vaccinated? Makes about as much sense as the rest of their mandates.

“11/10 – If The Left Ends Parent Rights, You Might Need A License To Raise Your Own Child” The State is already allowed to allow children to get abortions and vaccines without parental knowledge or permission. I guess you can look at the behavior of youth in public after being indoctrinated by public schools and rest assured the kids are in good hands. And some parents appear more than willing to surrender the parental obligations to the state. I commented on an article that claimed Governor Abbott of Texas was denying rights by banning mask mandates and, when I pointed out that a mask mandate is the OPPOSITE of respecting rights and those who want to rely on masks to pretend they are safe can continue to do so, many weighed in on how wrong I was. I don’t regard breathing as a right bestowed by the government.

“11/11 – Let’s think about why Biden nominated a Marxist to the Treasury Department” Even moreso than Obama (which was a high bar), idiot Biden… well, his puppet masters… seem to only nominate people that will be an insult and outrage to public that actually cares about this country. Just about every one of idiot Biden’s nominations makes Obama’s nomination of a NAMBLA member as “safe schools czar” seem logical.

“11/12 – Video: FLASHBACK – Dems Promise There Won’t Be Vax Mandates” Like knowing what corruption Democrats are involved in by seeing what they accuse others of, perhaps knowing what is coming at us can be determined by what they absolutely, positively promise to NEVER do.

“Hmm… just like CNN knowing about the raid on Stone’s home. It also seems the NYT got ahold of some of the information that was on O’Keefe’s phone that the FBI confiscated. I’m just glad the FBI and DOJ are not weaponized by the White House like that mean old Orange Man did, but never presented itself.”

For those who wonder what the hell was a kid from Illinois doing in Wisconsin, his Father lives in Kenosha, his dad worked the summer as a lifeguard in Kenosha. There are photos of Kyle cleaning up the spray paint off the school.
Kyle also has friends in the area .
Now what were the rioters doing in Wisconsin? The WOKE Governor Tony Evers, who also pulled ahead after midnight to beat Walker. He was a miserable failure as Wisconsin Superintendent of Public Instruction for ten years. He also ran on legalizing marijuana.

Jabbing the kiddies, the children are not old enough to make the decision to join a gigantic medical experiment, just as a baby doesnt decide to be aborted. Before you say they arent old enough to decide on a polio shot the childhood vaccines are not experimental, possible side effects are known if you bother to look.

Governor of Illinois Beetlejuice will continue her wokeness. (shrug) Queen of the FIBs in case you dont know https://www.urbandictionary.com/define.php?term=F.I.B%27s
(adult content warning)
Yes we can laugh at ourselves which is why we know Biden didnt win here.

I’ve always liked Walker & he was my first choice in 2016. The Radical Left was persistent in going afteer him and now Wisconsin gets what it deserves.
After all of this, how the f*** does anyone in a city fote Democrat anymore?

History needs to be rewritten for the vax:
BETHLEHEM—Biblical scholars have uncovered a dusty old scroll that turned out to be a record of Jesus’s birth. According to the ancient writing, Mary and Joseph were actually denied room in the inn because they were unvaxxed.

“The record reveals the reason why they were denied a room in the inn, clear as a shining star in the East,” said scriptural historian Bart Madson. “The Holy Family’s vaccination status banned them from going indoors, according to the mandate at the time.”

The ancient writ describes Joseph and Mary approaching the inn’s entrance, exhausted from their long journey to Bethlehem, and Mary being great with child. The warm comfort of the inn’s door was quickly blocked by Karenekiah, a mask-wearing pharisee who smelled like hand sanitizer, demanding proof of vaccination.

When Joseph explained the family’s natural immunity due to the virus already passing through their family, he was mocked and ridiculed by the pharisee as being “anti-science” and a “Samaritan.”

The Pharisee then sent them away, according to the record. As they turned to leave, the innkeeper came out and apologized for the inconvenience, but that “Karen” was there to enforce the vaccine mandate, and that he had no choice.

“You always have a choice,” said Mary.

The innkeeper gave a long, tired sigh, according to the dusty scrolls, then motioned for the young family to follow him to the nearby stable, where they were made as comfortable as possible.

The rest of the story can be found in another book, available to everyone.
Sooo true, The Bee

Give them time, The Radical Left will rewrite that too