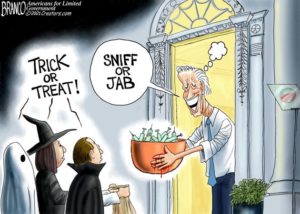 Welcome back to Day 283 of the Let’s go Brandon* occupation! Let’s get straight to the craziness:

Yes, it’s a dream, but aren’t dreams where any great idea starts?

If there’s any hope for a peaceful split in this country, movements like this give me hope

And guess what the cause is? Go ahead, take a guess!

So much for my hope for a peaceful split. The Democrats aren’t even bothering to hide their election fraud efforts anymore. Until they start going to jail expect these tactics to multiply

More on this story below

10/27 – The Goldberg Variant of the Trump Derangement Virus

There is no shortage of posts ripping on the #NeverTrump Vichy Republicans. This post gives a better look into their foul mindset.

Spoiler: That “Anyone” includes nobody from the Biden* administration

The person least surprised by this is probably Tara Reade.

and Terry MacAuliffe Is a Creepy Stalker and a Dishonest Slimeball

Have a great weekend, and Happy Halloween!

Just a casual reminder that Lincoln was a Republican https://t.co/V42SSPaKio pic.twitter.com/tnU7WPUlui

The Walt Disney Company would like to apologize to all visitors at our Disney World Hall of Presidents attraction who witnessed the animatronics malfunction during today’s show. pic.twitter.com/3yYEbQOcZt

This week in Racine a Sheriff announced an election crime, immediately the dems cried it was a partisan attack, translate as, none of the dementia patients, locked down for the Kung flu state wide, voted for Trump. Download a few Regular Joe Show podcasts from this past week, not the only shenanigans.

WEC members should be prosecuted.
Flash back