This is not the country my father fought in WWII for 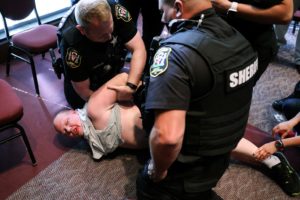 Heinrich Himmler was Adolf Hitler’s muscle. He was described this way by one author:

He was the quiet, efficient and oh so ruthless architect of the Holocaust; Hitler’s most loyal sycophant. He ruthlessly dispatched those who stood in his way as he rose to a position of power that was second only to the Fuhrer.

As President Joe Biden has found a need for muscle. He needs that muscle to squash the single greatest threat to democracy in history- the parents of school age children. Merrick Garland is Biden’s Himmler and he has shown himself ready and willing to take on this monstrous threat. He has also shown himself to be as honest as was Himmler.

Virginia has become the epicenter for a populist earthquake consequent to several highly offensive events.

On June 22 Scott Smith protested at a Loudoun County school board meeting, was arrested for disorderly conduct, taken to trial and found guilty. This is how the media portrayed it initially:

The man who found himself splashed across TV screens and newspaper pages, being dragged from the Loudoun County School Board meeting with a bloody lip and in handcuffs, on Tuesday was found guilty of disorderly conduct and resisting arrest.

Scott Smith was dragged to the ground by county deputies as tempers flared at the June 22 School Board meeting, egged on by protests against new state-mandated protections for transgender students.

According to testimony in the Aug. 17 District Court trial, Smith was arrested during an argument with a woman for whose daughter Smith’s wife had been a Girl Scout leader. Deputies dragged him to the ground, then outside, where he continued struggling and arguing with them, threatening to kick their teeth out. He was taken to the Adult Detention Center and charged with the two misdemeanors.

There was something missing. Scott Smith’s 14 year old daughter was sexually assaulted in a transgender rest room by a boy wearing a skirt. The Loudoun County School Board denied it happened because they knew disclosure would stymie their social engineering plan. Although they swore they never were notified of the assault they were notified the day it happened. Not only that, the Loudon County school board has been failing to report sexual assaults for years.  On the very day Smith was arrested, Loudon County school superintendent Scott Ziegler said

‘We don’t have any record of assaults occurring in our restrooms.’

The Loudon County prosecutor- connected to George Soros–  wanted Smith jailed. The assailant was transferred to another school where he assaulted another girl. The National Association of School Boards contacted the White House and were helped by WH aides to draft a letter to Merrick Garland and within five days Garland directed the FBI to focus on “domestic terrorists” like Smith, whose crime was to draw attention to the rape of his daughter in school and be dismissed for it.

It was one of the key examples of what the association said proved that “America’s public schools and its education leaders are under an immediate threat” from a “growing number of threats of violence and acts of intimidation occurring across the nation.”

“NSBA specifically solicits the expertise and resources of the US Department of Justice, Federal Bureau of Investigation (FBI), US Department of Homeland Security, US Secret Service, and its National Threat Assessment Center.”

The letter insisted that the “heinous actions” were “equivalent to a form of domestic terrorism and hate crimes.”

The letter, which came to light this week, was dated Sept. 29 — just five days before Attorney General Merrick Garland’s controversial decision to get the FBI to investigate the apparent threat.

A man’s 14 year old daughter is raped in a fluid gender rest room in school. He brings it up at a school board meeting and is told it didn’t happen and HE is arrested. Barack Obama says it’s all a phony made up story.

Stacy Langton is a Fairfax VA mom who, after watching a Texas school meeting video which noted two curious books available to kids and wondered if the same wasn’t true in Fairfax:

Stacy Langton was very concerned after watching a video of a Texas school board meeting that highlighted the availability of two books that contain several graphic and obscene illustrations of gay sex. She wondered if the books — Lawn Boy by Jonathan Evison and Gender Queer by Maia Kobabe — were available to students in the Fairfax school system.

They were. And she wanted to know why.

She calmly addressed the board and asked fair questions. She was not well received.

If you wish to see an example of what bothered Ms. Langton, you can see it here. Langton was upbraided for daring to care what her child was being taught. Terry McAuliffe, Governor of Virginia and Clinton pal, doesn’t think parents should have any say in what schools teach their kids and neither do liberals.

Dems to parents: Back off terrorists, and hand over your kids! pic.twitter.com/efDmuBDRJi

And they’re willing to do anything to stop you. So is Joe Biden, who has weaponized the Department of Justice to target conservatives. Garland, based on a letter written by Biden minions, has determined without a shred of evidence that concerned parents are to be considered domestic terrorists and it gets worse. Garland tapped the National Security Division of the US to be part of the pogrom.

This is very important because the NSD is not subject to oversight or review by anyone, including the Office of Inspector General. This way Biden and Garland can conduct all sorts of operations without anyone knowing what and how. And conducting them they are. Currently Garland is haunting Langton.

And what about those threats Garland was supposedly investigating?

Since the DOJ protest, Langton said she has been receiving daily threats from unidentified sources. She believes the threats are also a result of her public statements criticizing her children’s school curriculum, which she said included the distribution of pornographic materials to students.

“I have threats against my children by name, I have been followed in my car with my children, they have my vehicle, they know where I live, and I don’t know who’s putting somebody up to this, but it’s obviously meant to intimidate me,” said Langton.

He is a liar. Garland has no intention of looking the threats against Langton and her family. He has no intention of investigating the cover-up of sexual assault by the Loudoun County school board. And to think they wanted this dirt bag on the Supreme Court.

This is a full court press intended to intimidate conservatives (specifically Trump supporters) into submission and silence. This time it’s not going to fly. The leftists have touched the third rail. As Admiral Isoroku Yamamoto said

“I fear all we have done is to awaken a sleeping giant and fill him with a terrible resolve.”

China is testing a hypersonic missile. We’re focused on transgender bathrooms, trans Admirals, a third sex choice on passports and how to perform oral sex in elementary school. Kids can’t make change for a dollar. This country needs to resolve itself to be rid of the darkness that is the democrat party. My father was a WWII combat vet. This is not the country for which he fought.