Terry McAuliffe Is a Creepy Stalker and a Dishonest Slimeball 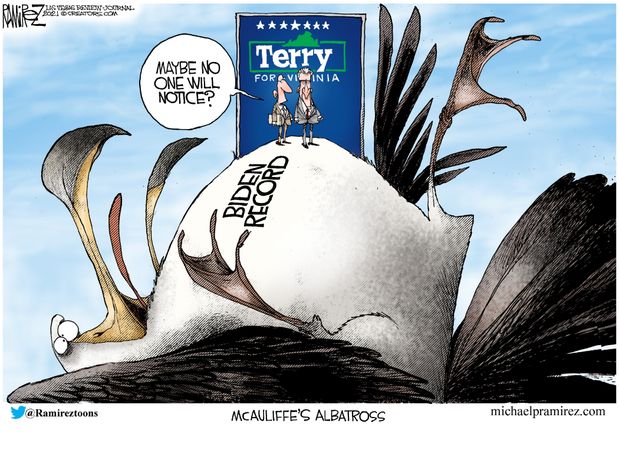 While I would have liked to have been less subtle in how I worded the title, Flopping Aces is a family friendly web site. One benefit of being married to a registered Democrat is seeing what kind of mailers The Radical Left is using to promote their campaigns. Today Sister Babe received two pieces of mail. The first is just, well, creepy: 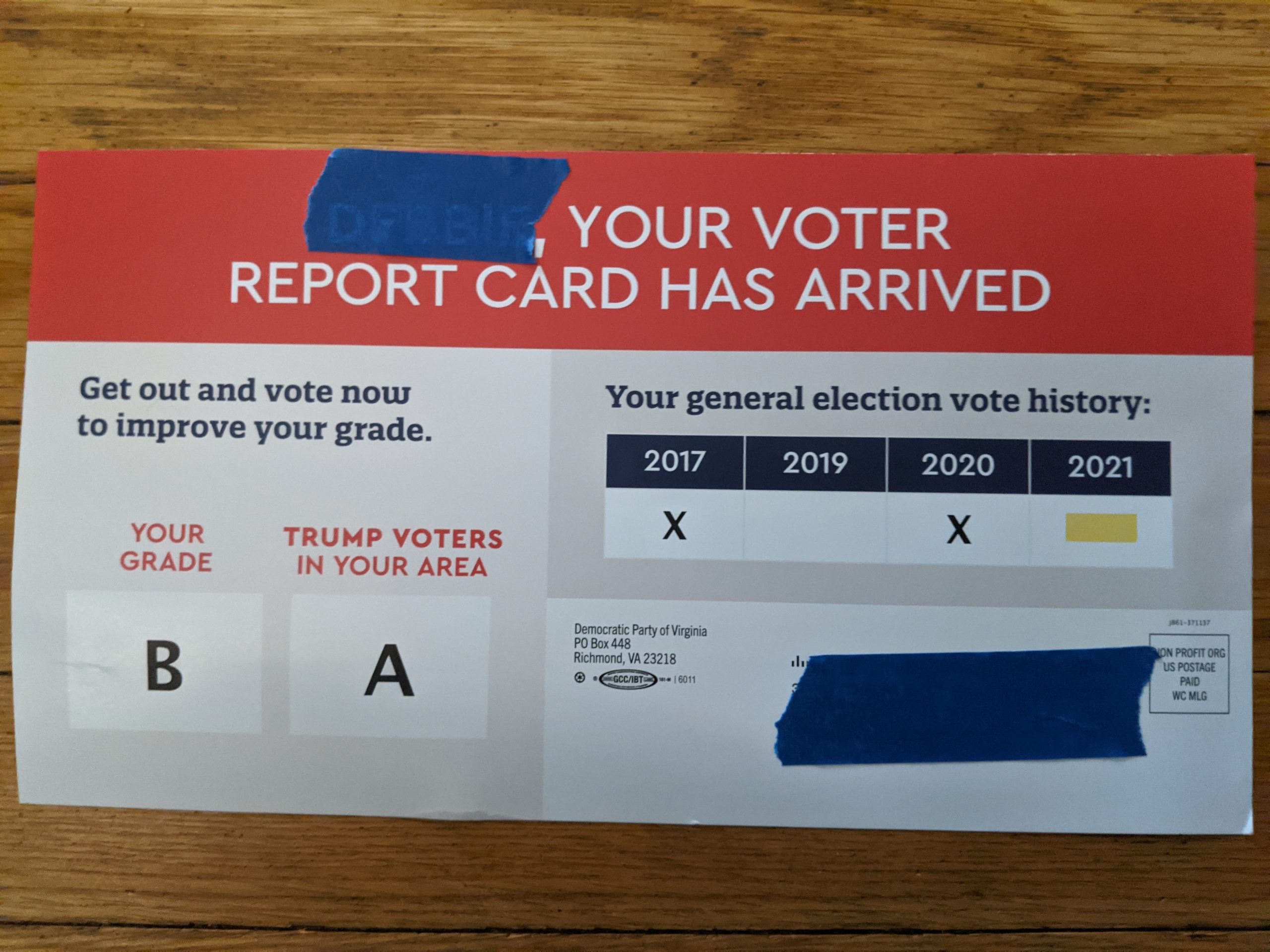 This is not the first mailer of this nature that Sister Babe has received. No, there is nothing stalker-ish whatsoever about going into somebody’s voting history and showing that you’ve been snooping on them! Today, in an envelope, Sister Babe also received a letter with the same voting record spying. Has the Branch Covidian cult that has Leftists so eager to broadcast their personal health info led them to think that all aspects of invading our personal lives is now welcome? Believe it or not, this wasn’t as obnoxious as the other placemat card we got in the mail today: 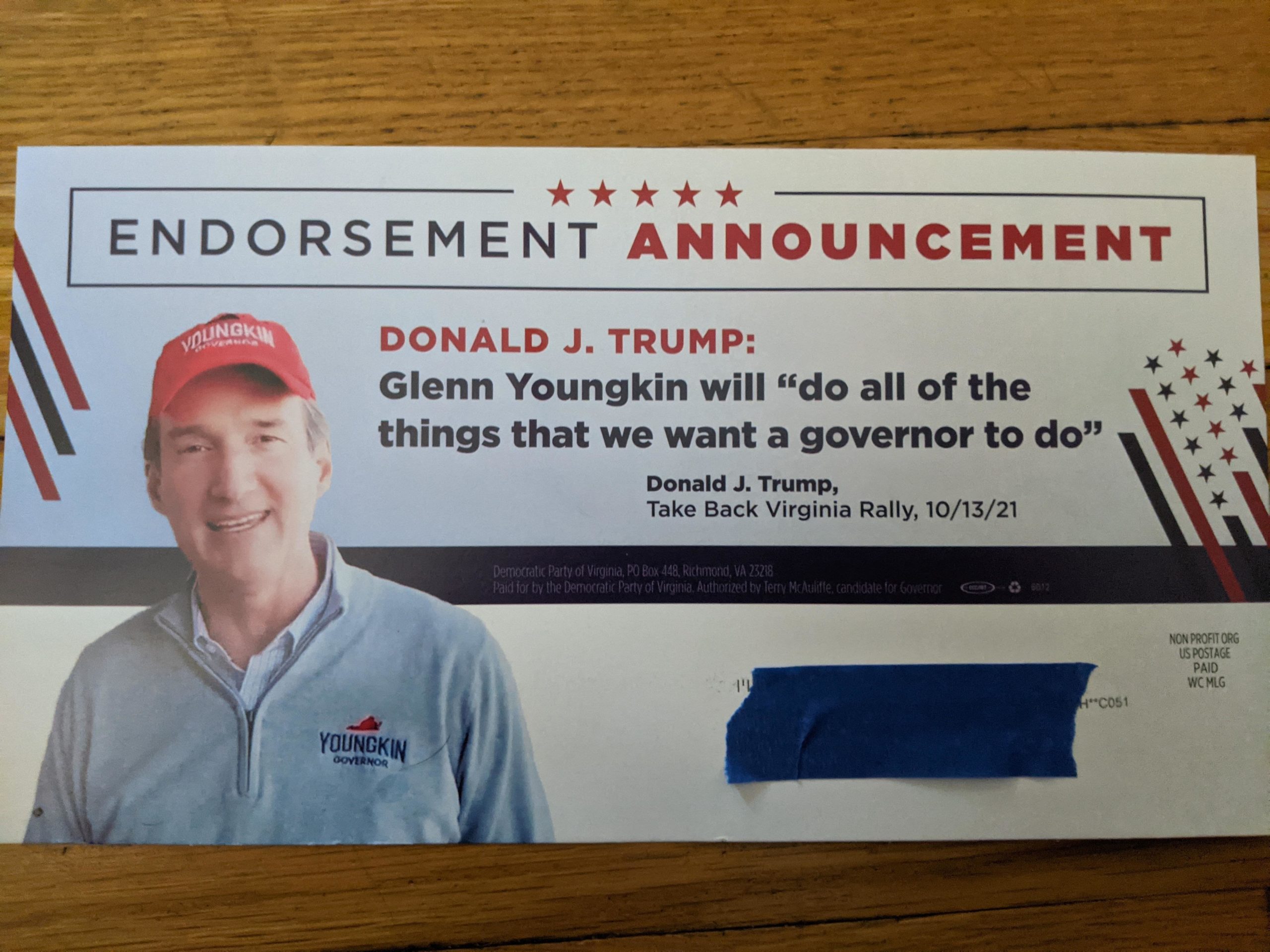 OK, this is a bit odd. A mailer showing President Trump endorsing Youngkin isn’t unusual, but why is it addressed to Sister Babe? I flipped it over out of curiosity, and there were just more endorsements from The Donald: 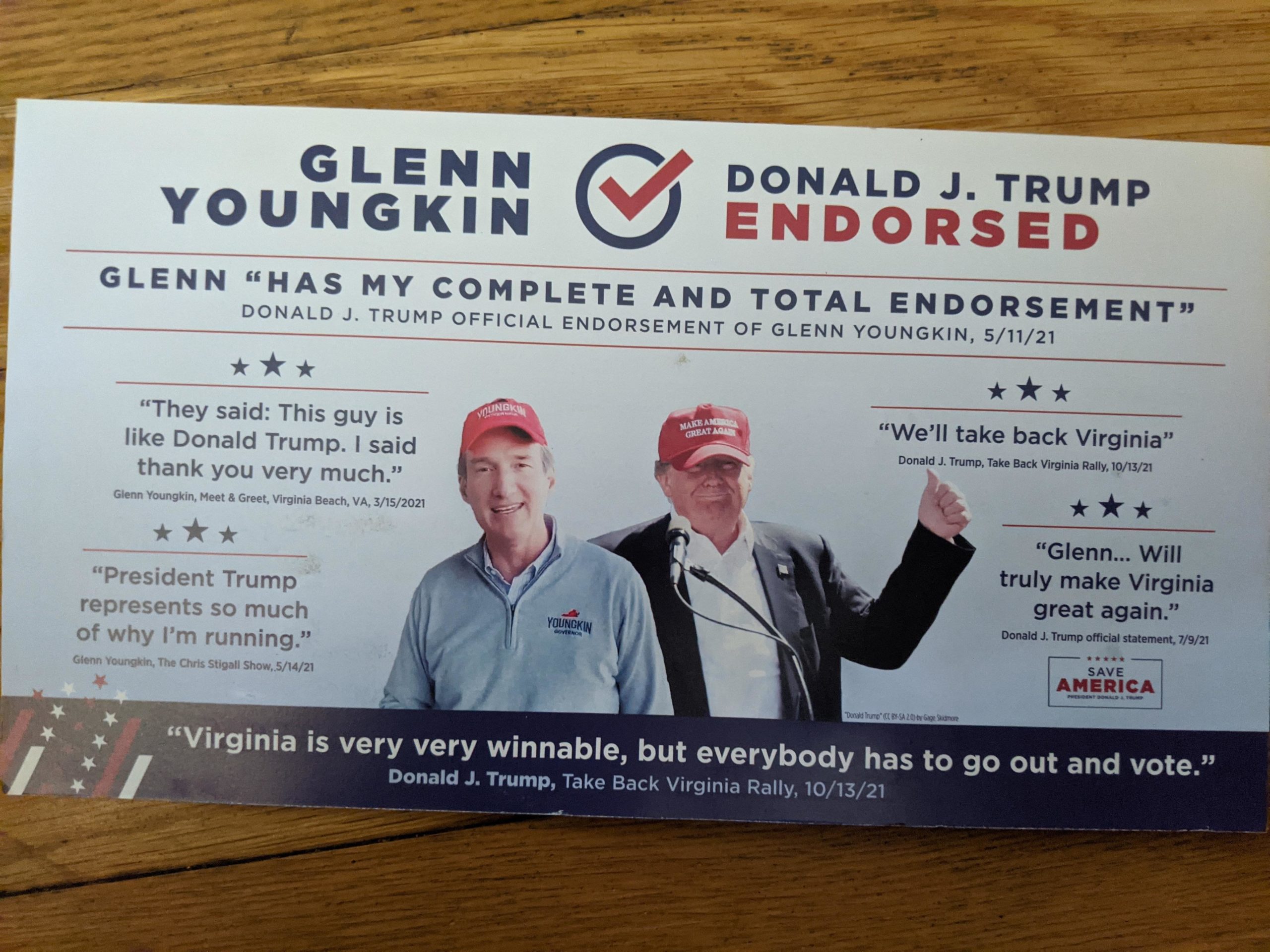 Now I’m really curious as to who sent this. BTW, when I showed this to Sister Babe when she got home, her graphics artist eye immediately caught the amateur hour Photoshop of using the same pic of Youngkin from the front to make it look like he’s posing with 45. But before she added her observation, my Horse Hockey sensors were tingling. Who paid for this? I noticed the logo in the lower right corner on the back and zoomed in on it: 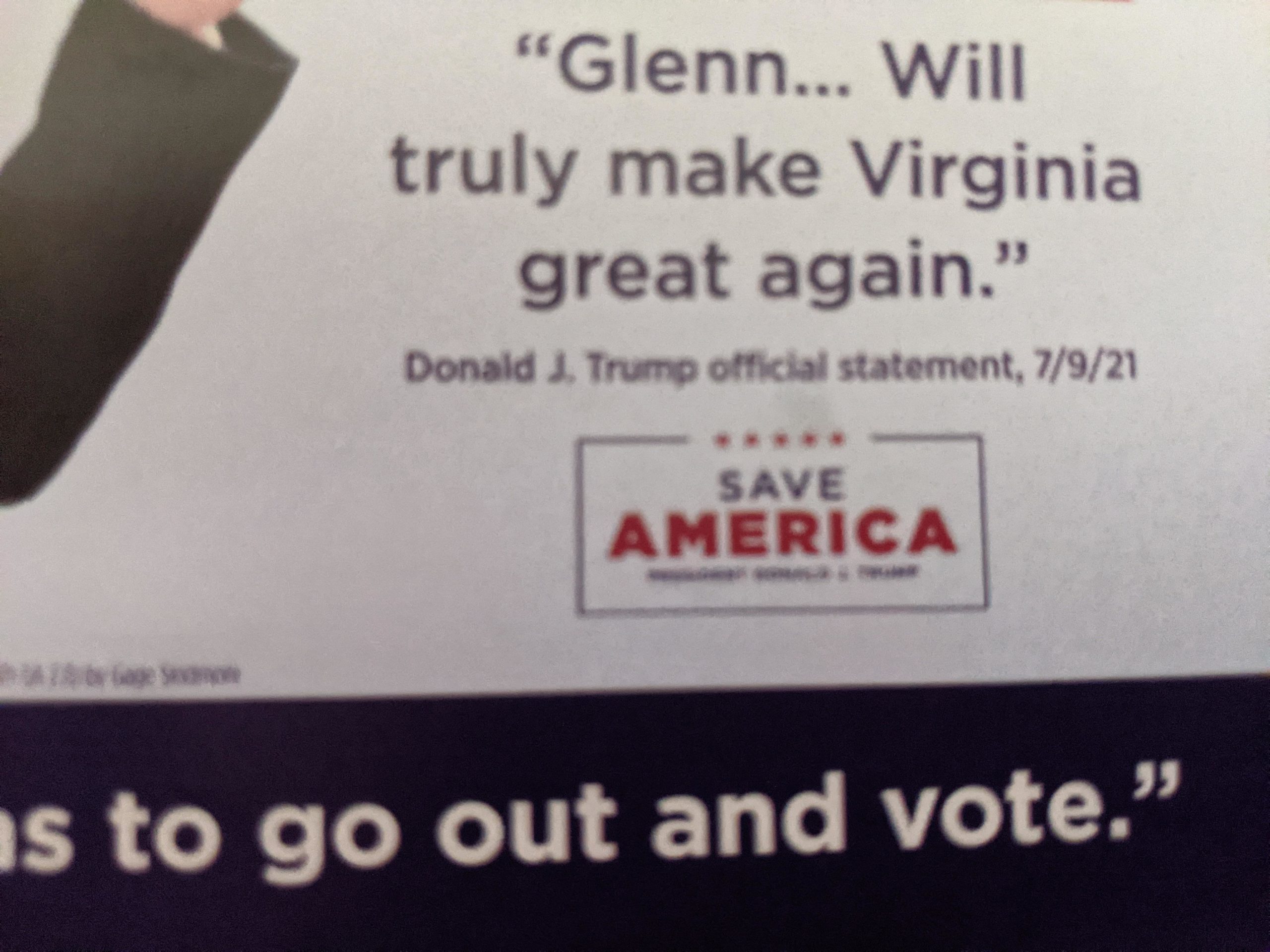 Aha! Save America is probably some group that the Dems set up for some false flag operation! But when I looked them up, Save America is an offshoot of some California Conservatives whose leader is despised by the LGBQWERTY crowd. On the surface this answers the question, but something still isn’t quite right here. So I look closer at the front of the mailer again, and if you go back to that pic and look at the bar passing through Youngkin I saw something odd. Shining a bright light on it got me my answers: 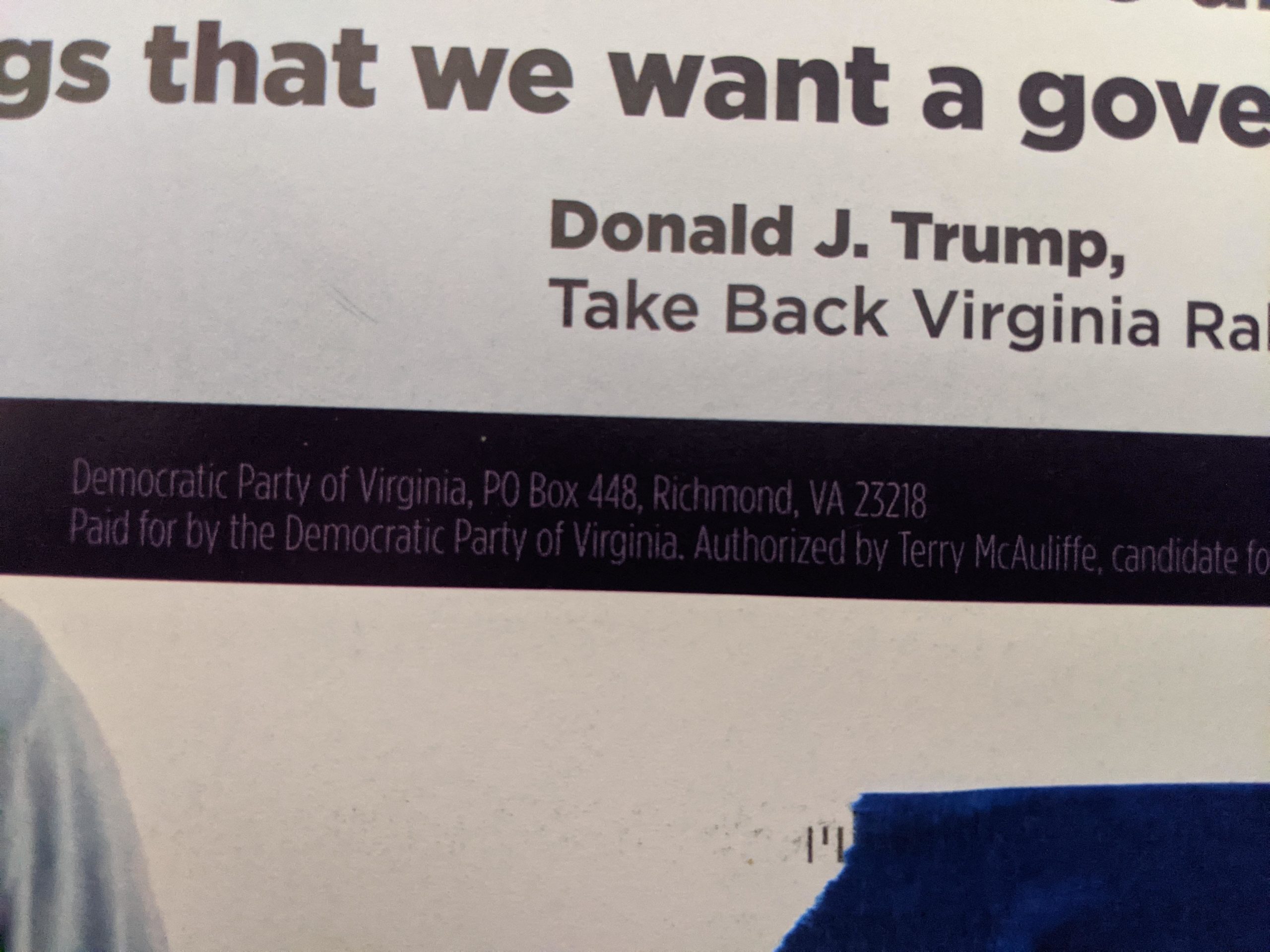 And there’s the rotten fish in the freezer – in tiny, low contrast print we learn that this mailer was paid for by The Democratic Party of Virginia. I could write a few thousand more words here, but I’ll just close with this: Damn, at moments like this I truly wish we had something resembling an honest press. This is exactly the kind of story that should make headlines, but instead the best it can do is a blog in the Conservasphere.

And these nimrods in the press have the audacity to wonder why we Normals don’t trust them.

McAuliffe’s election strategy: convince Hispanic people to have bigger families as he thinks we will always vote for Democrats. I’ll admit that many Latino voters are very family oriented. That is why we’re voting for @GlennYoungkin next week. https://t.co/84Wrp0kW9T

Calling parents who oppose having their kids Brainwashed with this CRT as Terrorists where was this Dip-Wad when Rioters and Looters were laying waste to come of our major Cities? MacAuliffe is just another of Dictator Biden’s Cabinet of Scoundrels,Fiends,Cads and Villians

In other words, he’s a perfect Clintonista

I understand that Youngkin is pulling away from MacAuliffe in the most recent polls.
As long as Terry’s cheating is not too egregious, he might just get away with it and “win” re-election.
But, as the polls show a widening lead for his opponent, this gets harder to pull off.
Can Dems restrain their cheating and throw Terry under the bus (of a fair, legal election) or will they have to cheat enough to keep him in office?
Terry is ready to challenge the results no matter how much he loses by, if he loses.
To that end, Hillary is lending him a Perkins/Coie lawyer who happens to also represent most of the Dems who finalize election results in VA.

A trip down memory lane.
https://youtu.be/rVeqUsjbBkE

Even though I’m confident Mac will find a way to steal the election on Tuesday, this meltdown has been damned entertaining to watch

It appears that the more Democrats pull out their “big guns”, the further behind McAuliffe falls. They rolled out (literally) big, fat, gap-toothed tax evader Stacey Abrams. They brought in cackle-whore Kamala. Along came “You Can Keep Your Doctor” Obama. Then, in the act of ultimate desperation, they deploy Grampa Grope Quid Pro Quo Idiot Biden to stumble and mumble his way through an “endorsement”, one corrupt criminal supporting another.

After all that, Youngkin pulls ahead by 8 points. The Democrat’s biggest problem is they are nothing but a balloon coated with propaganda. The propaganda doesn’t provide much protection to the balloon and it is easily popped. Democrats take it for granted that everyone gobbles that propaganda up as fast as they shovel it out, not just their easily duped sycophantic useful idiots who crave lies. Except for the most indoctrinated, NOBODY likes Abrams, Kamala, Obama or the idiot Biden; they are all disasters for this country, corrupt and dishonest. In addition, linking someone to Trump, who cared for the country and the people, who secured the border, who grew the economy and improved the lives of minorities, who spread peace through the Middle East, is not as much a negative as they, the victims of their own propaganda, might believe.

Nobody among us Normals likes those clowns, but Obama is still their deity, and the media tried liek Hell to make Abrams their newest messiah.

Funny how those who preach that “paying your fair share” is patriotic also worship those who cheat on their taxes.

Ok he is all those things but why just cut him out of the Democrat herd? Barry couldnt draw a crowd stumping for him. Same results he had for Creepy.