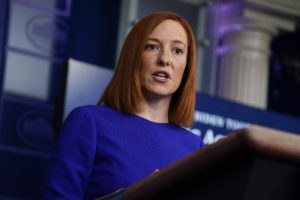 A lot of people think that Joe Biden is the President of the United States. While it is true that Biden is the titular twit who is the figurehead of the government he is not really in charge. He meanders about reading note cards and is steered by his manipulative spouse. Here he seems entirely unaware of his surroundings as Jill tends to him.

Jen Psaki on Tuesday clarified President Joe Biden saying outgoing New York Gov. Andrew Cuomo did a “hell of a job,” with the White House press secretary saying that the president made clear “you can’t separate personal behavior from other work.”

On Biden saying the “vast majority” of FBI agents are good people:

“What did he mean by … the vast majority part,” Fox News reporter Kristin Fisher asked Psaki during the daily press briefing.

“That’s exactly what he meant,” the press secretary replied, before abruptly moving on to another question.

Psaki tends to get really snarky and testy when pressed. There are may more examples:

During the White House briefing on Wednesday, press secretary Jen Psaki explained how President Biden plans to get states to meet his goal of having educators and school staff receive at least one COVID-19 shot by the end of March.

The White House clarified a number of statements President Biden made during a live town hall Thursday night, walking back his vow to call in the National Guard to aid the congested supply chain and his suggestion that the United States would defend Taiwan from a potential attack from China.

The White House told Fox News on Friday that “requesting the use of the national guard at the state level is under the purview of Governors.”

On Biden’s claim to have visited the border:

Psaki “clarified” Biden’s promise that no one making under $400K a year would pay a penny increase in taxes:

Biden even reiterated that promise during his pre-taped interview with George Stephanopoulos that aired on Wednesday. “Yes, anybody making more than $400,000 will see a small to a significant tax increase,” Biden told George Stephanopoulos. Biden also said, “If you make less than $400,000, you won’t see one single penny in additional federal tax.”

Except not so much, according to Jen Psaki, who “clarified” what Biden meant, and it’s a pretty huge honking clarification. (Read: straight-up lie.)

Oh, he really wasn’t talking about “individuals,” Psaki claimed, when he said all that, he was talking about the “families.” Wait, what? Yes, they’re actually trying to sell that now. That’s a huge difference and in the words of the New York Post “significantly drops the threshold” to whom the tax increase will apply. Which means that they just added millions more individuals they’re going to drop taxes on now who didn’t think it was going to apply to them.

Biden said Saturday that “young people” arriving “on the border” was a “crisis.” But Psaki said at her daily press briefing that Biden actually doesn’t believe that.

IOW, not even Biden believes what he is saying.

Here she “walks back” Biden’s statements on vaccine availability

Sometimes Psaki has to walk back the statements of other people:

White House Press Secretary Jen Psaki attempted to walk back a statement by presidential climate envoy John Kerry which claimed President Joe Biden “had not been aware of what had transpired” following a submarine deal with Australia that upset the French.

“Of course he was aware of the French being upset,” Psaki said in response to a question on the matter from Fox News’ Peter Doocy. “He of course was aware, the president, of the French being displeased about the deal with the Australians. John Kerry also speaks regularly to the French as part of his role as the climate envoy. He’s someone who also served as Secretary of State.”

This was one of the few times I actually believed Kerry.

Psaki also clarified a comment Biden made that the US would defend Taiwan in the event of an attack by China, in breach of a longstanding policy that states otherwise.

‘Yes,’ he responded when asked in a CNN town hall about defending Taiwan. ‘We have a commitment to that.’

Biden’s statement was at odds with the long-held US policy known as ‘strategic ambiguity,’ where Washington helps build Taiwan’s defenses but does not explicitly promise to come to the island’s help in the event of an attack.

‘The President was not announcing any change in our policy nor has he made a decision to change our policy,’ Psaki said.

Psaki was signaling to China that it is welcome to run over Taiwan and the US won’t do a thing about it.

Biden hits the White House at 9 am and leaves at 7 pm.  That is, when he is even there.

By my count, this is Biden’s 20th weekend home in Delaware. Compares to: 10 weekends at Camp David , 9 at the WH and 1 overseas.

Yet there is still no time to visit the border. Fox News says he’s never been to the border in any capacity.

Circling back has given way to walking back. What the media ought to do is simply forget Joe Biden and instead only address Jen Psaki. There is no point in asking Biden anything as she will “clarify” it or walk it back later. Why not just skip the middle man whose lights are on but no one’s home?