The Steele interview timing is no coincidence 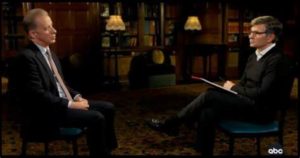 You will remember that the Clinton campaign hired and paid Remington Steele to concoct a dossier on Donald Trump. You will remember that it was full of excrement that no one in the Mueller commission could validate. Even Peter Strzok said the dossier was a full of “bullsh*t” and probably Russian disinformation as well. The garbage dossier became the lynchpin for the illegal surveillance of Carter Page.

Yet Remington Steele is back once again to defend it. Why? Read on.

Special Prosecutor John Durham has been plodding along for a very long time but some recent actions have hinted that something worthwhile is coming. FBI Attorney Kevin Clinesmith, who forged an official document, copped a guilty plea earlier this year and was sentenced to 12 months probation plus community service. That seems a rather light punishment for an FBI lawyer who committed forgery- unless there was something to offer.

Then Durham indicted Michael Sussman. He is accused of lying to the FBI about for whom he was working. He claimed to be acting as a “good citizen” but in reality was trying to set up Donald Trump as working with a Russian bank. Assisting Sussman were Rodney Joffe and Marc Elias:

The indictment alleges that Sussmann, Joffe and Marc Elias — then a partner at Perkins Coie and the Clinton campaign’s general counsel — “coordinated and communicated” about the Alfa-Bank claims “during telephone calls and meetings,” which were billed to the Clinton campaign.

Marc Elias’ fingerprints are all over the phony Russian collusion hoax:

The Hillary Clinton campaign and the Democratic National Committee helped fund research that resulted in a now-famous dossier containing allegations about President Trump’s connections to Russia and possible coordination between his campaign and the Kremlin, people familiar with the matter said.

Marc E. Elias, a lawyer representing the Clinton campaign and the DNC, retained Fusion GPS, a Washington firm, to conduct the research.

After that, Fusion GPS hired dossier author Christopher Steele, a former British intelligence officer with ties to the FBI and the U.S. intelligence community, according to those people, who spoke on the condition of anonymity.

Some feel pretty certain Elias is going to be indicted:

If Durham’s starting with the outer layer, then the paid political operatives at Perkins Coie and Fusion GPS will get indicted first. That means some combination of Marc Elias, Glenn Simpson, Christopher Steele and a few others.

This indictment appears to have been written to accomplish two main tasks:

With the next actions of Durham looming on the horizon Elias needs a shiny object- a distraction- to once again sow the seeds of doubt into the jury garden.

To pull this off Steele needed to engage someone who would never put him or anyone connected to the Clinton campaign in jeopardy.

Once a Clinton water boy, always a Clinton water boy. Snuffleupagus was not going to ask Steele anything worthwhile but would afford Steele every opportunity to throw dirt on Trump. If you want to see the kind of questions that someone ought to be asking Steele you can see them here in the form of tweets by Stephen McIntyre. Here’s one of them:

That did not happen, of course. McIntyre finishes with this:

maybe @GStephanopoulos can follow up his obsequious interview of Christopher Steele with a fawning interview with OJ Simpson about OJ’s continuing search for the real killer. It’s that level of ludicrous.

Naturally, Georgie’s pals in the media will broadcast Steele’s lies without challenge. This interview comes at a designed time. It is a canard. Meanwhile we can only continue to hope that real justice is done.

Make up a story…air it as fact.

Let the low-information types who desperately WANT to believe it get infected for a few weeks, then quietly retract the whole story.

Simple psy-op disinformation, and it works beautifully on those who have been told they’re the majority by Stephen Colbert and Whoopie Goldberg, but are actually the shrinking minority of Americans still clinging to a media-approved world that doesn’t exist.

Funny thing is, the above operation was so effective, there are still people out there who think Trump had some connections with Russia that gamed the election in his favor.

Quite the opposite, as we all now know well.

Clinton was a no-go for Democratic Party candidacy after her burning of 30,000 emails, but installed Comey was there to go ahead with Clinton’s installation.

The steele dossier vs. the laptop from hell(hunter biden)

The media promoted the steele dossier at every opportunity claiming its veracity based on their reputations. Even to this day, the dossier was a complete fake, not one element of it had a core of truth. Yet nary a one apology from any media that promoted such a lie that for all intent and purpose, crippled the Trump Presidency.

The media ignored the laptop from hell. They concocted a fake story in an attempt to debunked its authenticity. Efforts to silence anyone who investigated the laptop were initiated by big tech in social media. It was an all out offensive to protect joe in advance of the upcoming 2020 election. Many post election who now know of the laptop from hell say it surely would have changed their vote(s).

The problem with this interview is that it goes out to those kept ignorant of the facts by the left’s propaganda media. Steele can say anything he wants (unchallenged by Stepinapileofit) and not raise the curiosity of any of the left that have been kept unaware that all those parading on network television calling Trump a traitor had testified there was no such evidence of any collusion with Russia. They still haven’t put the two and two together regarding lying little pile of Schiff claiming he had, in his hands, evidence of Trump’s collusion and then going radio silent when the Mueller report showed there was no evidence, no collusion, no crimes and no obstruction.

The left’s main protection from detection is simply that many believe that there is so much evidence of absolute corruption through and through the Democrat party that it MUST be a plot. NO ONE can be THAT corrupt… right? If the Democrat party were that demonic and corrupt, the media would have told us… right?

They hide their corruption in plain sight.

Tucker has his take on this as well.

This should prove to be interesting

Real justice would require Americans to confront the ugliest truth that our real enemy has always been the mafia called the British aristocracy and their associate toadies in The City of London and Wall Street. Christopher Steele is MI-6. His consultant firm is lead by Sir Richard Dearlove, the former head of MI-6. It is an obvious MI-6 front company. Steele stated in the interview that his work wasn’t foreign interference in an American election because Britain has always helped America. Hmm let’s see: Revolutionary war, war of 1812, 3 years after the battle of New Orleans Andy Jackson had to conquer Florida to clear it of British operatives who were inciting and arming the Seminoles to attack Americans, the first assassination attempt was by a British man working for a British bank, Britain armed the confederacy, half the Lincoln assassins escaped to the British Empire, the confederate secretary of war escaped to the British Empire, Mckinley is assassinated and Teddy Roosevelt whose uncles were the British agents sending arms to the confederacy is installed as president, a British man attempts to assassinate candidate Trump, a British spy smears him, the Australian ambassador to the Queen (head of state of Australia) starts the traitorous FBI investigation of Trump, Lord Mallock Brown of the Queen’s Privy Council (and handler of Soros) owns the voting machines the rigged our elections, British subject Dr. Peter Daszak leads the Wuhan virus gain of function research.

stephanopoulos is an incubus. stated that if Trump won he was leaving the country. I suppose that when you are making $15 million/year with a black American express care you would not want to leave. when georgie worked for whore dog billy and slut hillary in dc, he had a reputation of a male prostitute.

That GWB’s BFF Stephan.. did the show was also no “coincidence”!