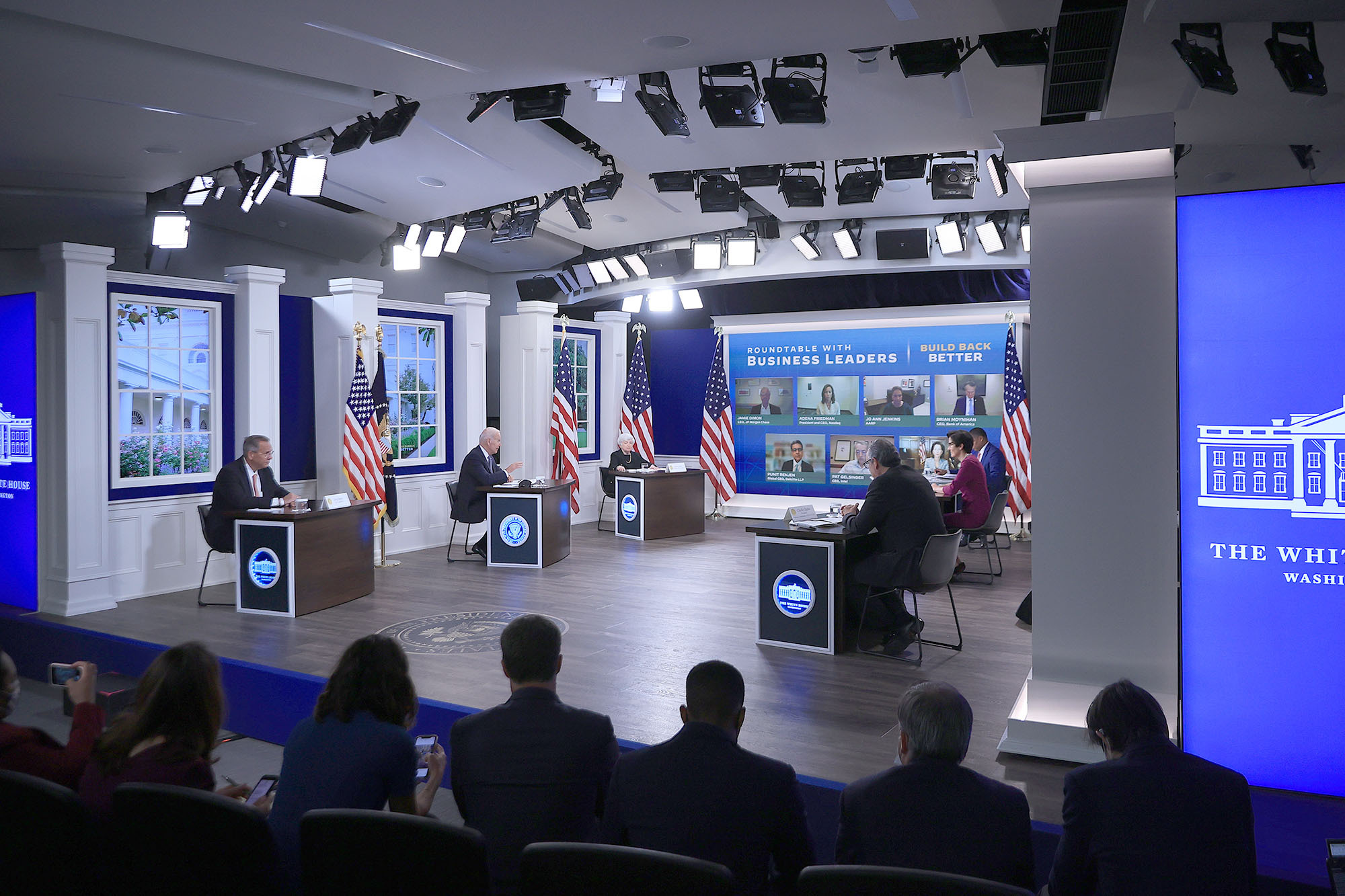 Fake set.  Fake room.  Fake windows.  Fake flowers.  A phony White House production set resembling the The Gong Show, was built across the street from the White House. The cardboard desks and cheap plastic chairs are a nice touch.  Our crack president, Biden, can now read what he is told from a script directly from a face-on-monitor.  This avoids the embarrassing glare from the normal teleprompter glass that can be seen on camera.  Reflected glass is the least of Joe’s problems.  He has become a national embarrassment on the world stage. Recently, Joe traveled to Michigan and delivered another horrid speech to an unenthusiastic crowd.

During the speech, Joe Biden slurred his words, mumbled about Grandpop and a “jargee station” (no idea what he meant there), slurred his words, and then finished off spouting some gibberish. Joe was in peak form.  It was another amazing performance.

Unfortunately, Joe enjoys the protective shield of the Democratic party and the lying mainstream media:  (Hey, nothing to see here.  Joe is super swell.  What a president!  Move along peasants. He did too receive 81 million votes.  Stop saying that he didn’t.  He is beloved.  He is articulate.  He is our grumpy grandpa and we worship him.  Hail Biden! You will learn to love him too.)  However, while Joe stumbles and mumbles and wanders away from adult supervision, the problems we face are real and growing worse.

The barbarians are at the gates.  Something wicked has arrived.

Chris Columbus must have been a Democrat. He took off with 3 boats not knowing where he was going. He didn’t know where he was when he arrived, and he did it all with borrowed money.

Between 1985 and 1995 Americans had (and/or imported) more children than the “baby boom,” generation!
https://www.cia.gov/the-world-factbook/countries/united-states/images/54acf7ee-7c1e-581b-9669-3698d689840a
No wonder Dems are kowtowing to people between 25 and 35……
Ignore their criminality.
Ignore their debt.
Let them play instead of have jobs.
If they must join the military, let them have fun there.

Who is really responsible for those policies Joe takes credit for or avoids blame for.
I think Nancy Pelosi is one of them.
I recall her promising that Obamacare would make it possible for the subway busker to never have to worry about medicals care.

Joe Biden is not the President of the United States.

He must be legally removed and a free and fair election held.

It’s a stage set for televised White House presentations. Most recurring video presentations involve the use of a set.

This is Qanon entertainment at its goofiest. It’s right up there with claims that prominent democrats were running a human trafficking operation out of DC’s Comet Ping Pong pizzeria.

Biden allowed it to resume.

Obama put kids in cages. Trump freed them. Biden put them back in.

We don’t need some BlueAnon conspiracy theories for smoke and mirrors like you tools do. The truth is right there….sitting under a bridge and hijacking busses to invade our country while we have no President to lead us.

It’s good for a person to know where their memes, rumors, and conspiracy theories are coming from.

Sometimes you just serve yourself on a silver platter by completely showing us the irony in your false beliefs:

“It’s good for a person to know where their memes, rumors, and conspiracy theories are coming from.”

Spend this week picking apart all the memes, rumors, and conspiracy theories you treat as gospel, and you’ll just find a indoctrination campaign by global elites…

It worked on you.

But why does he need a set that is fake. President Trump never used a fake set. He talked directly to the fake news. It was like shooting fish is a barrel.

For consistent lighting and audio, and for seamless transitions from one person to another during presentations. You can’t figure this out by simply looking at the set photograph?

What a line of total bullshit

Why can’t your president answer questions?

Because Biden has no answers. Biden is just an inanimate object setting on the shelf.

Are they unable to broadcast from the WH?

If your president is actually in the WH it would seem much more convenient to televise from there. Is there some reason why they don’t?

Does your president stay at the WH?

Maybe his health requirements are better cloaked at the Eisenhower executive office building.

As I said, stage sets aren’t “fake”. They’re a normal part of effective video broadcasting. They take up space, even when they’re not being used. White House space is pretty much filled already.

A child could understand this.

greggie, didn’t you hear Biden 2 days ago explain that he uses the set because he didn’t feel right filming in the White House with not being duly elected?

No, but you folks imagine you hear a lot of things that aren’t actually being said.

Is Biden a “broadcaster?”

The irony is lost on you, I know.

This fake WH is set up to contain a senile, fake president from public.

A President of the United States is broadcasting whenever there are microphones and cameras.

Trump exemplified that, I know. If we can stop the non-Americans like you, we’ll see Trump back where he legally belongs: leading the people who voted for him.

Biden is a puppet being hidden from the public in a fake WH set that can be carefully controlled.

That’s what dictatorships do.

Who got 81 million votes again?

Let’s ask Eric “Trump won’t win, I made f*cking sure of that” Coomer in Boulder how many votes he swapped from Trump to Biden.

Probably a lot more than 7 million….

But is is fake. The backdrop of the rose garden is at the WH, not at EEO.

Southwest Airlines Cancels Nearly 2,000 Flights This Weekend as Rumors Swirl Employees Are on Strike Due to Covid Vaccine Mandate

Southwest Airlines Cancels Nearly 2,000 Flights This Weekend as Rumors Swirl Employees Are on Strike Due to Covid Vaccine Mandate

If Red China invades Formosa we will capitulate. Austin knows full well our “fighters” are too WOKE to win. Given the weakness of the Pentagon, it is likely Red China will anex Formosa.

Violent crime has been “surging” in Dem cities for at least 60 years. My sister lived in B’kln years ago . One of the reasons Ruddy was popular was he temporarily, stopped the surge of violent crime. In the 60’s DC had the. highest “per capita” murder rate in America.

Conservatives know full well the votes for dumb Jo fabricated by DOMINION’s computers are fake. UNIPARTY say they are not; I think here again UNIPARTY is disingenuous. I think the dumb rich guy got less than 60,000,000 American votes. Yes “Something wicked has arrived”!

IF , and it is a big IF, we can get rid of DOMINION, and we still re here, we can banish the wickedness in 2024. But THE UNIPARTY is fighting “tooth and nail” to protect DOMINION in AZ. and GA. as I type. No reason to think they will not continue to keep Dominion computers to fabricate votes against any conservative.

One question, O.E.J. In your lifetime have you ever seen 50 or 60 thousand people show up for an ex-president making a speech outdoors a year after that ex-president departed the Oval? The answer to that question is, “No, I have not.” Trump gotta a lotta votes that were frauded into oblivion to prop up a demented imbecile and give the levers of power to people whose names remain hidden from the public. Things are heating up, fast…

But Dominion hates Don; and as Uncle Joe said 100 years ago, “The vote COUNTERS are what matters!”!

Election was stolen by Dominion; as what you asked clearly shows!

A President of the United States is broadcasting whenever there are microphones and cameras.

But, in the case of your president, the cameras and the microphones have been relegated to one location in recent weeks. It is well known that your president can only muster a 3 1/2 hour work day. That is barely part time. Americans deserve to know who is running the country… 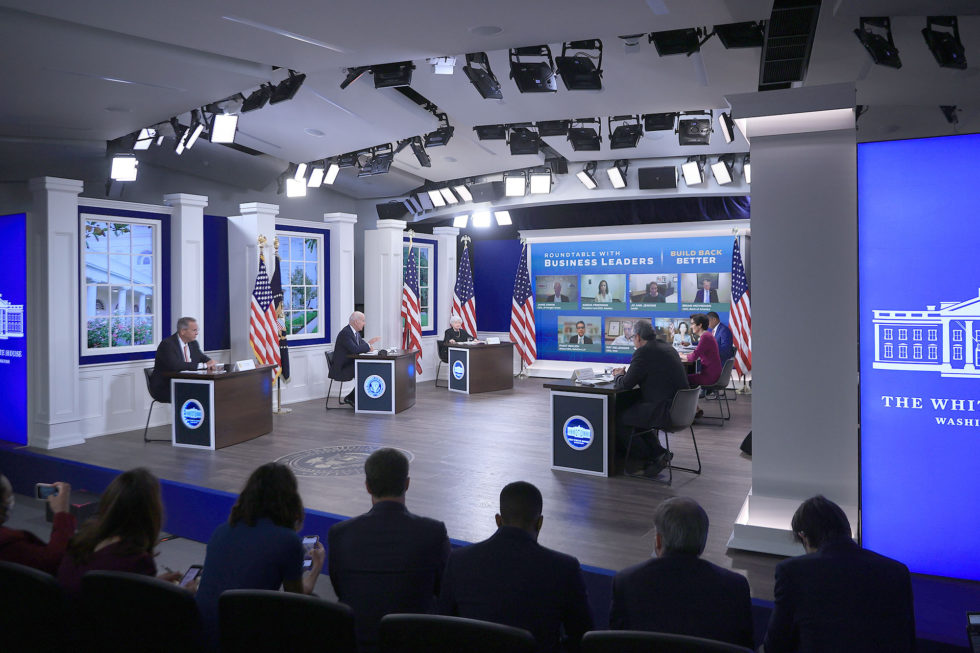 So, looking closely at the picture we see the faux WH set actually has the stage set bookended by graphics that proclaim “The White House” “Washington”. The faux set is in the Eisenhower Executive Office Building adjacent to the actual WH.

From that are we to presume;

1) the biden regime has renamed the EEOB?

2) going forward the WH is where ever and whenever biden appears before cameras and microphones to broadcast?

No, the White House is NOT too crowded with furniture for Joe to do recorded messages.
It is too accessible to THE PRESS for Joe to do so.

Also, truley public announcements must be done in ONE TAKE.
We have no idea how many bits and pieces of Joe getting it wrong had to be edited out before a finished piece is presented to the public AS IF it is “Live.”

Not far off, but the Babylon Bee has Joe as a “White House Whistleblower Who Claims Strangers Drag Him From Place To Place And Make Him Sign Papers And Read Words On Monitors And He Hardly Gets Any Ice Cream”

With all the fake crap they used to “fool” us into thinking the person occupying the WH in was in the WH, who’s to say the “vaccine” he was “injected” with wasn’t fake too?

0
Reply
TrumpWon
Reply to  another vet

Internet sleuths have determined that, funny you should ask. Looking closely reveals the cap on the syringe was still in place while it was pressed to his scrawny are. Also, there was gauze between the capped syringe and his scrawny arm.

It was complete fake

0
another vet
Reply to  TrumpWon

They didn’t want him keeling over on national television from the jab. It would be detrimental to their lies.

Here is what’s on 46 agenda today:

Login
wpDiscuz
36
0
Would love your thoughts, please comment.x
()
x
| Reply
‹ Back to Categories