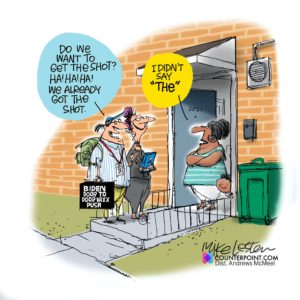 Welcome back to Day 262 of the Harris* Occupation! Let’s get stratight to the insanity:

9/30 – Forced Vaccinations Get Worse – Louisiana Health System Now Requires Spouses of Employees to Get Vaccinated, or Pay a Non-Compliance Penalty for Vaxx Violations Every Pay Period

Stupidity like this actually makes me happy. Why, you ask? Purely selfish reasons – As someone who works as a contractor for the federal government I’m hoping that enough of this stupidity gets crushed in the courts before any mandates get pointed at me personally. Unless it does a lot sooner than later.

I’m not worried about Republicans confirming this loon. It’s not like they would confirm an eco-terrorisst as the head of the Bureau of Land Mangement, right?

A Socialist who doesn’t know basic math? I am shocked, SHOCKED I say!

This marks one of the rare occasions where we know who’s giving the orders when Biden* tells us he’s not allowed to do something. And be sure to play the one minute clip in the first tweet at the end of this post. Lions for Lambs might have been one of the many garbage anti-Bush movies from the mid aughties, but damn did that clip perfectly call where we are today in Afghanistan.

10/4 – So Much for Feminist Allies: CNN Analyst Applauds Leftists Who Harassed Sinema

Remember three years ago when The Radical Left was giggling over harassing Republicans out in public? And do you remember what ended it? Yes, that would be when Pelosi had it happen to her, and then the abuse mysteriously stopped. If what happened to Sinema is going to be more than a one off, 2018 taught us what needs to happen if we Normals want it to stop.

I’m kidding, of course. When we Normals try to behave like Leftists we get arrested and labeled terrorists. Hire an illegal alien to do it for you instead.

Tim Pool had a great suggestion for parents in one of his videos – show up for the board meetings waving Antifa flags, saying that you’re there to oppose Fascism. Now what is the DOJ going to do?

10/6 – An Afghanistan Grows In Wisconsin

You’ll notice that none of these refugee drops are happening in wealthy Leftist enclaves. Never forget that they truly hate us Normals.

Am I the only one whose BS detectors have been blaring every time I hear or see and ad from Facebook calling for new regulation over Big Tech? Kurt Schlichter has a better solution – let’s use trial lawyers evil powers for the forces of good.

On that cheery note, have a great weekend! And Happy Columbus Day!

Little extreme, but I understand 😂 pic.twitter.com/3rY5L1pVbE