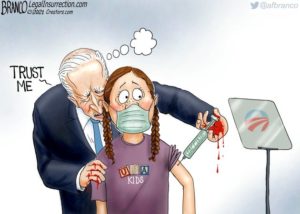 Welcome back to Day 255 of the Harris* Occupation! October is here, which means that it’s time to start decorating the house for Halloween. Of course, if I wanted to make Chateau D’ Bob truly terrifying I could just decorate our yard with the latest headlines. For example:

This is sheer genius, and as the end of the post points out – worrisome on a different level. And one person was kind enough to post in the comments Stock Watchers for the House and Senate. Follow the inside traders!

Brace yourself; this great post by The Other McCain features some intelligence from Jonah Goldberg

One almost has to admire The Radical Left’s ability to ignore obvious facts that oppose their belief. If you want a beautifully profane analysis, check this vid from AZ resident Razorfist.

I’ve been wondering why such an easy target like Che hasn’t gotten attention, especially on college campuses

The reason behind it will surprise nobody.

This is even worse than the article suggests. Now how are we going to show the anti-vaxx rants made by Biden* and Harris* when there was a different president in the White House?

9/30 – Every Republican Is ‘Literally Hitler,’ So Stop Caring What Libs Say

There was a time when I would have shaken my head at stories like how Crowd Boos as Biden Interrupts, Delays Congressional Baseball Game. I used to believe in respect for the office of the presidency, but after how The Radical Left has behaved since 2016 all I can say is, “You called down the thunder. Now reap the whirlwind.”

Finally, a religion that Leftists won’t ridicule. No wait, there was Obama worship, And Climastrology. And The Religion of Peace (TM). Never mind…

History will never forget how FDR withdrew the military and abandoned bases, weapons, and equipment in Hawaii, relying on the kamikazes for security. https://t.co/qp8TzoP1eb

Removing “woman” and “her”, from a legendary woman’s quote specifically about the rights of women.