Nothing They Do Makes Sense 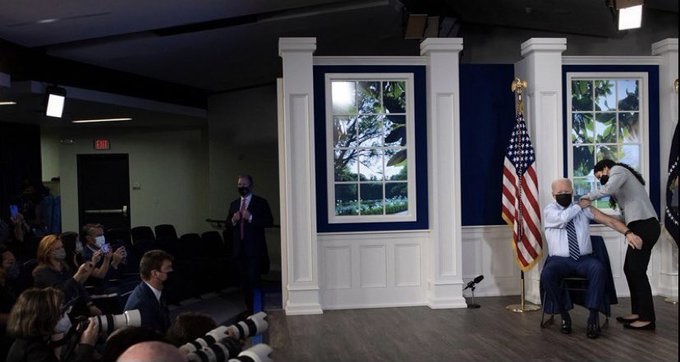 Recently, President Biden was observed getting a “booster” shot in what appeared to be a room at the White House. Unfortunately, the White House “room” was an elaborate hoax. Slow Joe got a shot of something (maybe), on a fake set, constructed specifically for a staged event. It was Kabuki Theater. Apparently, Joe starred in his own one-act play, No Time to Vax for his captive audience the media. Amy Tarkanian said:

Why would someone set up a fake White House backdrop when they live and work in the actual White House?

Nothing they do makes sense.

“Nothing they do makes sense,” perfectly describes Biden’s entire presidency. Does it make sense to threaten people who aren’t vaxed, fire them from their jobs, and yet keep our southern border wide open? Thousands upon thousands of immigrants from third world countries are pouring into our country, many infected with horrible, contagious diseases. Does it make sense to blame the border patrol for simply doing their jobs? Does it make sense to airlift thousands of unvetted, undocumented Afghanistan males and spread them surreptitiously across the land? Does it make sense to abandon billions of dollars of sensitive military equipment in Afghanistan and leave Americans stranded and at the mercy of the Taliban? Joe must live in an alternate universe if he thinks that moronic mandates from a befuddled monarch are popular with the peasants. Hey, wait, they’re not. Do you hear what I hear?

Across the land, from sea to shining sea, people are screaming F*** Joe Biden at the top of their lungs. You can’t un-ring that bell. This heartfelt and enthusiastic chant rings out weekly in multiple college football stadiums and succinctly sums up how many Americans really feel about their leader. Whoa Joe. I thought that 81 million people voted for you. Recently, Joe was even booed at the Congressional Baseball game. BOOMSHAKALAKA! That had to hurt. It’s almost like Joe lives in an alternate universe. Biden thinks he is a great president, beloved by all, improving our lives and strengthening our country. Someone should tell Joe that he is an unwitting dupe for those with evil intent to permanently and drastically change our country (for the worse) and then escape total blame. This covert band of miscreants concocts their evil brew in the dark of night and makes Joe the patsy. The world is laughing at Joe but his handlers quietly hide in the weeds, under a cloak of invisibility, and continue to compose more toxic Executive Orders for him to sign.

In a way, I feel sorry for Biden. His popularity is sinking like the Titanic and soon will be resting on the bottom of the ocean. Someone should have seen this coming and organized an intervention. Now that would have made sense.