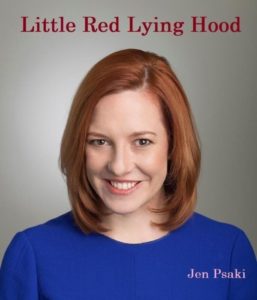 Jen Psaki has an interesting job. She is one of the front people for a miserable old demented liar. Her trouble is that with each passing day she takes on more and more of that mendacious streak running through and controlling Biden. This has resulted in Psaki acquiring a new moniker- “Little Red Lying Hood” and it fits her perfectly. One does wonder, however, how long this deceit might continue. While she may gain some respect for tenacity she is destroying her reputation. She is as dishonest as is Biden- an echo chamber for a liar. Let’s have a look.

Here she participates in the conspiracy against Donald Trump:

When faced with her previous statements, she deflected

DOOCY TIME, part 2: Biden “has said and you have tweeted that allegations of wrongdoing based on files from Hunter Biden laptop are Russian disinformation. There is a new book…that finds some of the files…are genuine. Is the [WH] still going with Russian disinformation?” pic.twitter.com/zRKOzh9gJ1

When the false news about Border patrol agents “whipping” illegals was irresponsibly reported Joe Biden immediately seized upon it without so much as a thought to verify:

“I promise you, those people will pay,” Biden told reporters at the White House on Friday. “There will be consequences. It’s an embarrassment. But beyond an embarrassment, it’s dangerous. It’s wrong.”

Judge, jury and executioner. And completely wrong. But hey, that changes nothing says Psaki.

.@PressSec says that the distinction between whipping immigrants and using horse reins does not change the circumstances regarding the investigation and disciplining of border patrol agents.

"Our reaction to the photos has not changed." pic.twitter.com/a6eAHF7N24

Horse patrols, which are highly effective, were suspended in Del Rio for absolutely no reason other than Biden wants to make the border even more porous. The border agents were disciplined for doing their jobs exactly as they were trained.

After a while one could reasonably come to the conclusion that Biden does want to destroy the sovereignty of the US.

Despite all illegal invasion records being broken under this idiotic regime, Psaki insists that this invasion is “cyclical”:

And that Afghanistan disaster? Who is responsible? 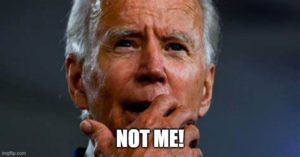 Q: “Who in his military advisers told him it’d be fine to pull everybody out [of Afghanistan]?”

PSAKI: “I’m not going to get into specific details…”

Q: “Military advisors…said it was OK to pull all the troops out?”

PSAKI: “That’s not what I said.”pic.twitter.com/Nc5eUdroOr

And that totally effed up Afghanistan surrender?

WATCH: Jen Psaki says Biden has confidence in every member of his national security team after the botched withdrawal from Afghanistan. pic.twitter.com/U5ojBNvqgN

When confronted with the generals contradicting what Biden said about leaving a residual force in Afghanistan:

Confronted on Biden contradicting his own generals, Press Secretary Jen Psaki dodges: “I don’t think we need to dumb this down.” pic.twitter.com/xwK9cnJN4A

Psaki: we don’t have open borders despite there effectively being no Southern borders

“Immigration is tough. It always has been because, on the one hand, I think we are naturally a people that wants to help others,” Obama told ABC’s Good Morning America in an interview which aired Tuesday morning. “At the same time, we’re a nation state. We have borders. The idea that we can just have open borders is something that…as a practical matter, is unsustainable.”

A reporter noted Obama’s comments and asked Psaki, “Does President Biden agree with President Obama that ‘open borders’ is unsustainable?”

“We don’t have open borders. So yes, he agrees,” Psaki responded.

Here is Psaki asserting that spending $3.5 trillion dollars costs nothing

The CBO itself said this would add at least $250 billion to the deficit each year for a decade and probably a lot more than that.

WOW. Psaki just absolutely SNAPPED at a reporter and walked away after being asked about Biden’s plummeting poll numbers

But there might be a hint of some good news. Psaki hints that Biden is headed for a nursing home

This is crazy stuff. Madness. If Psaki had an ounce of common sense she’d resign and save her reputation but it seems she has the same callous mentally impaired disregard for America as does her demented boss.

I forgot a couple!

“Title 42 is a public health requirement,” Psaki responded. “Because we are in the middle of a pandemic, which by the way, we would have made progress on had the former president actually addressed the pandemic and not suggested people inject bleach.”

Like I said, she’s become infected with same inability to tell the truth that Biden suffers from. She also has revealed that she was a classmate of AOC’s in economics.

Jen Psaki: It’s “unfair and absurd” that companies would increase costs for consumers in response to us taxing them more. 😳 pic.twitter.com/rHilrYdj4j