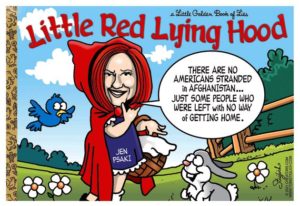 Welcome back to Day 248 of the Harris* Occupation! Let’s jump right in:

Take a guess how this went. Go ahead, take a guess!

As you probably guessed, it offended people who needed to be offended

Welp. That follows the last story nicely. All the more reason taking back our education system is so crucial.

For obvious reasons, our press is doing its best to ignore

This week’s tweets at the end of the post will include soem of the greatest hits from last Saturday’s FBI rally!

This is an interesting double edged sword. As much as I hate to see the our best being purged from our military, I then stop and remember who our country’s leadership will next be asking them to attack.

Gulag Barbie is one of those creatures with whom it’s impossible to move the needle on. Anyone who follows politics knows who she is and is unlikely to change their opinion. That said, let’s take advantage of the constant opportunities to ridicule her, and by extension, her supporters.

9/21 – The CDC takes orders from the teachers’ unions

I believe it was @Iowahawkblog on Twitter who said it well a while back, something to the effect of, “When you hear about public sector employees organizing, remember who they’re organizing against.”

9/22 – The Nation: All You Peons Must Be Stopped From Resuming Your Pre-COVID Travel Habits

Back in the day I used to describe The Nation as a Liberal’s (Back when the coud be called Liberals and weren’t radical Leftists) equivalent of National Review – well written representations of their respective sides. Now they represent the Radical Leftist extremists vs. the Vichy Republicans standing athwart and shouting, “If you just slow down, in 20 years David French and Jonah Goldberg will be arguing for whatever you tell us to!”

Why look at all sides of a complicated issue when simple fear mongering and panic will suffice?

Only Democrats could have the gall to complain about Russia trying to cheat on the level that they do themselves.

Do ‘ya know where we can purchase some illegal narcotics and plan an insurrection against LGBTQ people of color?” pic.twitter.com/nqSeJNVyA3

“But see, the exfoliation is key. An effective skin care regimen requires…Oh wait, here one comes…Uh, Trump is great. I also like America. Let’s kidnap a governor…Ok, he’s gone. Anyway, you have to make sure your pores are clear. That’s critical…” pic.twitter.com/fxko23WrG4

“I thought you were bringing the avocado toast, Brad!” — Today’s @FBI https://t.co/Ygk3zOMlOg

😝😝😝😝😝😝😝😝😝
At least the undercover feds dressed for the occasion of the J6 rally… pic.twitter.com/yWkwLBiLfi

If GOP does well in the 2022 midterms, congressional Republicans should hold hearings where they subpoena these guys, ask them what they were told to expect, and then just laugh and laugh and laugh at their answer. pic.twitter.com/56sQue18RN