A visibly angry old man declared war on unvaccinated Americans yesterday and your freedom is irrelevant.

President Joe Biden on Thursday declared war on the 80 million Americans who have yet to get a COVD vaccine and asked them ‘what more is there to wait for’ as he announced mandates covering two thirds of all workers.

‘This is not about freedom or personal choice. It’s about protecting yourself and those around you, the people you work with, the people you care about, the people you love. My job as president is to protect all Americans,’ he said in remarks in the State Dining Room at the White House.

‘We’ve been patient but our patience is wearing thin. And your refusal has cost all of us. So please do the right thing,’ he said.

This is from the guy who promised to unify the country and build it back better. 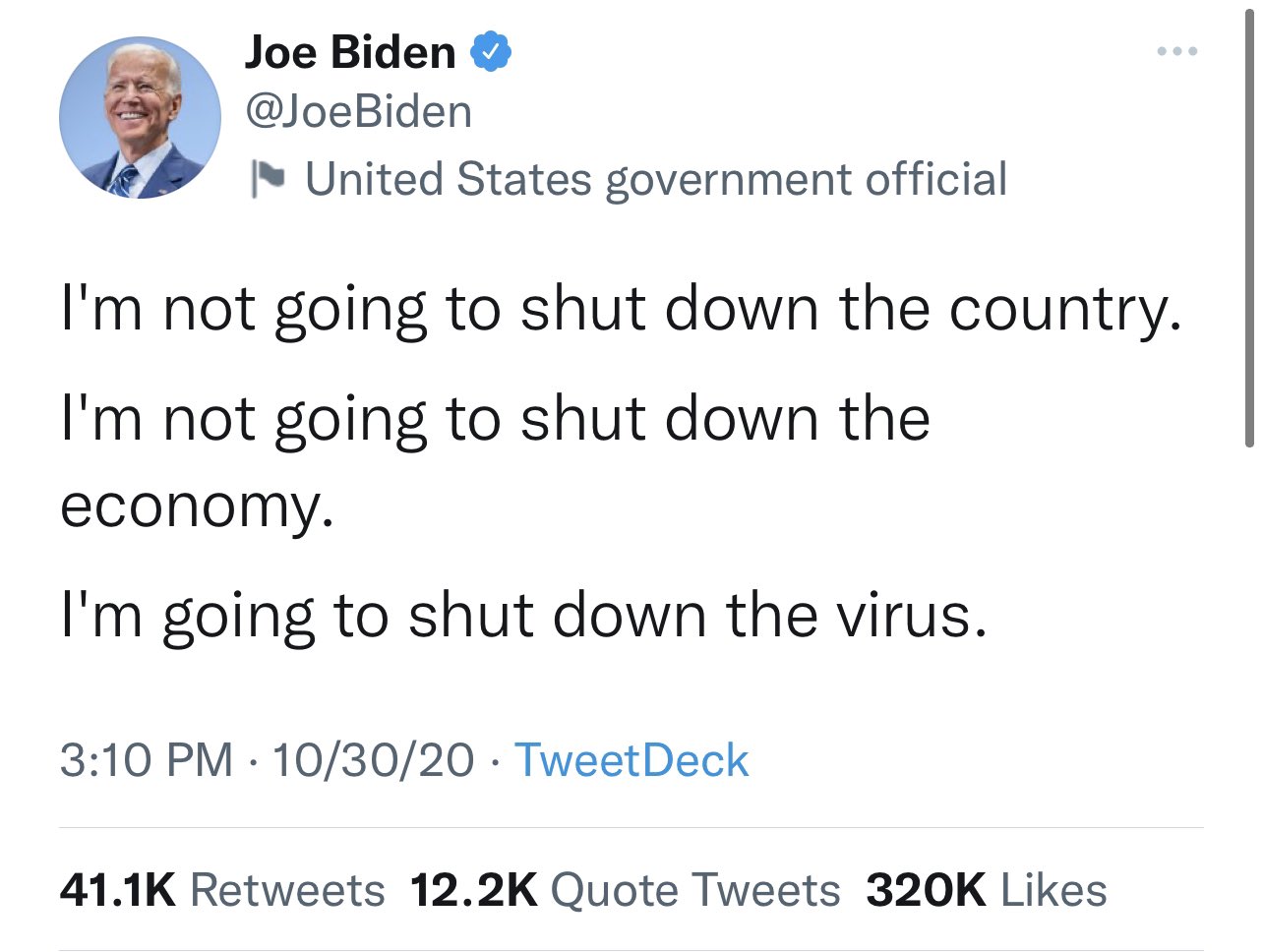 Needing to distract America from his failed Presidency Biden pivoted to the pandemic.

Among the conditions of his national vaccine mandate:

You might remember way way back in December when Biden promised

“I wouldn’t demand it (vaccines) be mandatory.”

Like everything else Biden says or does, it was meaningless, as was this Pelosi blather

Nancy Pelosi: “We cannot require someone to be vaccinated…it is a matter of privacy” pic.twitter.com/9pvoqFdHek

And if you refuse, be prepared to pay

Joe Biden tells vaccinated Americans to “be prepared to pay” if they don’t follow his anti-science mask mandate. pic.twitter.com/OAy3StpjHY

That might include involuntary incarceration. Of course, there are some questions about all this. Mr. President, is this Constitutional?

REPORTER: “Is this constitutional, Mr. President?”

Then that doofus Ron Klain gave it all away

Ronald Klain, the White House chief of staff, faced criticism on social media Thursday after he retweeted a post that seemed to praise the Biden administration for pulling off the “ultimate work-around” for a national COVID-19 vaccine requirement.

But the fun doesn’t end there. Illegal aliens are exempt from the vaccine mandate.

But Biden stopped short of mandating the vaccine for illegal immigrants attempting to cross America’s border, even though about 30% of immigrants held at federal detention facilities are refusing to be vaccinated — and they have the option to refuse

“And to make matters worse, there are elected officials actively working to undermine the fight against COVID-19,” he said. “Instead of encouraging people to get vaccinated and mask up, they’re ordering mobile morgues for the unvaccinated dying from COVID in their communities.

“Right now, local school officials are trying to keep children safe in a pandemic while their governor picks a fight with them and even threatens their salaries or their jobs. Talk about bullying in schools,” Biden also said.

“If they’ll not help, if these governors won’t help us beat the pandemic, I’ll use my power as president to get them out of the way,” he added.

This is very Hitlerian and here’s why-

Sweden will push ahead with easing Covid-19 restrictions at the end of this month, removing most curbs and limits on public venues such as restaurants, theatres and stadiums, the government said.

With most adults vaccinated, Sweden has gradually eased some restrictions during a summer lull in the pandemic.

While it has seen infections mount in recent weeks amid the rapid spread of the more contagious Delta variant, deaths from the disease have remained low.

Biden attacks on DeSantis and Abbott are right out of Alinsky

Pick the target, freeze it, personalize it, and polarize it.

BTW, the least vaccinated populations in this country are minorities. Pass the popcorn.

He desperately needs the focus off of him and his utter failure as President. Nearly 70% of Americans think things are bad in this country. That’s about 30% too few. We are careening toward a dictatorship and accelerating. This country should be telling Biden to go f**k himself. Why? Because Biden says vaccines don’t work.

We are going to protect the vaccinated workers from unvaccinated coworkers. pic.twitter.com/QMuEz9ynis

That makes absolutely no sense whatsoever.