Keep your Son Away from this Kid’s Show – Watch this instead! 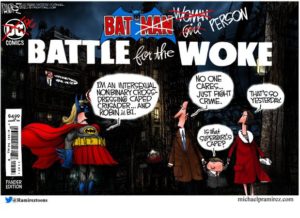 Whenever the Bob Family takes a vacation that involves staying in a hotel, I like to step outside of our normal routines. One minor part of it is in what TV we watch when we’re relaxing back in the room. Nowadays, even though most hotel TVs or our various device allow ud to stream whatever we normally watch, I prefer to engage in that old Gen-X pastime of channel surfing. What’s more, I prefer to tune in to a TV show or movie outside of what I might normally watch. A few years ago while surfing the kids’ programming for Little Bob, we stopped at a show called Steven Universe. At first glance, it seemed like any other weird kids’ show – some goofy kid who hangs around with aliens that protect him. My first warning that something was off came during a commercial break that included a brief clip from one of the show’s fan conventions. Wait, what? How many childrens’ shows have fan conventions mainly attended by adults? And I noticed thet something seemed off about the people cosplaying for the show. I looked it up online & found the convention, Empire City Con. Scroll through the pictures on the home page and you’ll probably see it too. Is it just me or does this convention look like the After Party for Portland University’s Diversity and Inclusion Department following an Antifa riot? At this point I started paying closer attention to the show.

I’ll probably get some minor details here wrong, but here is what the premise looks like after my first glance (it’s also been a few years). Steven’s parents are no longer together, and he’s a little boy protected by three powerful female aliens, although like any kid protaganist he often saves the day in his own special way. His parents are apart becasue his mother was a powerful warrior alien who sacrificed herself to save someone or something, I’m guessing Steven. He’s on decent terms with his dad, although the man doesn’t seem to be much of Steven’s life. Dad is a washed up rock star, whose defining physical traits are his beer gut and skullet. Although I never saw these in the few episodes that I watched, apparently what makes this show so big with The Radical Left is that it’s full of LGBQWERTY themes. In a show that airs on Saturday morning targeting young kids. While this is bad enough, it was one subtle element of the show that truly bugged me.

The way that Steven is drawn is pretty basic. He’s a doughy kid, generally wears a red shirt with a yellow star in the middle, tucked into his jeans to show his slight gut, blue jeans, and… flip flops. Always wearing flip flops. Yes, here is a little boy who never does any kind of sports, building, or any kind of activity that would involve wanting to protect one’s feet or need ankle support. In other words, not a little boy – The Radical Left’s vision of what a young male should be.

I didn’t want to make a big deal of watching the show at the time, and made subtle moves to have other plans when this show was being aired & let it fade away once we left for home. My leaving this show behind was easy – keep an eye out if you have kids or grandkids tuning in. It looks like the show left live broadcast in 2020, but there’s eight seasons and a movie out on the various streaming services.

A much better alternative was a fairly recent discover by Little Bob called Henry Danger. This show had a five season run and also ended in 2020. Unlike Steven Universe, this show is a great one for little boys. The first season starts with a young teen getting a job in an antique shop, learning that his new boss is a super hero (Captain Man), and becoming his sidekick (Kid Danger). The two go on to fight cartoonish super villians, having antics with other characters who join their team, and in later seasons it becomes similar to the Teen Titans cartoons, focusing less on crime fighting and more on sitcom-esque antics. Even at the end when it was clear the show had run its course after five seasons the shows were still fun to watch. Along the way there was a lot to like about the show:

There’s more, but trust me on this. The show also had a one season animated series, The Adventures of Kid Danger, that I also recommend. Same good writing, and with what is essentially the unlimited special effects budget that one gets from animation. An episode involving a Shrink Ray gun at a local Chuck E Cheese clone stands out. And this will come as a shock, but a well written show with basic Conservative values that doesn’t defecate on half of the country was a ratings hit and won multiple kid’s choice awards.If only Hollywood would take notes…

On a sadder note, after Kid Danger ended, Captain Man continued with a follow up show, Danger Force. At the risk of making this post too long, so far it looks more like typical Hollywood than Kid Danger. And I know to keep tabs on what Little Bob is watching. It’s not going to get any easier, but the least I can do is pass aolng what I’ve learned to any parents coming up behind me. And any recommendations from those parents ahead of me are appreciated.

The Week In Radical Leftism returns next week!

So, is everyone okay with this animated re-boot of #BladeRunner? 😉😄@doomcock pic.twitter.com/Rx9PtVpiF7