Biden didn’t just lose Afghanistan. He did it on purpose. 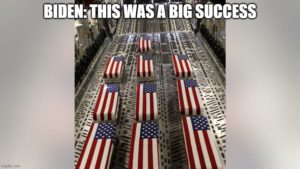 It’s nearly impossible to overstate Joe Biden’s incompetence. He is a world class f**kup. He is a liar of galactic proportions. He accepts no responsibility for anything.

Nothing he says its the truth. Nothing.

Biden famously made a series of predictions over the last few months and absolutely all of them were wrong.

“The likelihood there’s going to be the Taliban overrunning everything and owning the whole country is highly unlikely,” Biden said. “The Afghan government and leadership has to come together. They clearly have the capacity to sustain the government in place … there’s not a conclusion that, in fact, they cannot defeat the Taliban.”

Q    Is a Taliban takeover of Afghanistan now inevitable?

THE PRESIDENT:  No, it is not.

There’s going to be no circumstance where you see people being lifted off the roof of a embassy in the — of the United States from Afghanistan.  It is not at all comparable.

And I want to make clear what I made clear to Ghani: that we are not going just sus- — walk away and not sustain their ability to maintain that force.  We are.  We’re going to also work to make sure we help them in terms of everything from food necessities and other things in — in the region.  But — but, there’s not a conclusion that, in fact, they cannot defeat the Taliban.

“Now, the president prepared for every possible contingency, including this one,”

Nothing is my fault, says Biden. It’s the IC’s fault:

WASHINGTON – The intelligence community did not predict Afghanistan would fall as quickly as it did, President Joe Biden told ABC News in an interview in which he also rejected reporting that some military leaders asked him to keep some troops there.

“The intelligence community did not say, back in June or July, that in fact this was going to collapse like it did,” Biden told George Stephanopoulos in an interview that aired on Good Morning America Thursday.

Or maybe he was told


As the Taliban began seizing provinces across Afghanistan in recent weeks, the CIA’s intelligence assessments began to warn in increasingly stark terms about the potential for a rapid, total collapse of the Afghan military and government, current and former U.S. officials told NBC News.

Just 24 hours before a suicide bomber detonated an explosive outside Hamid Karzai International Airport, senior military leaders gathered for the Pentagon’s daily morning update on the deteriorating situation in Afghanistan.

Speaking from a secure video conference room on the third floor of the Pentagon at 8 a.m. Wednesday — or 4:30 p.m. in Kabul — Defense Secretary Lloyd Austin instructed more than a dozen of the department’s top leaders around the world to make preparations for an imminent “mass casualty event,” according to classified detailed notes of the gathering shared with POLITICO.

They did nothing to protect the troops there. They did not broaden the security perimeter. They did not shield those on the front lines. They did not pull them back. Now 13 of our best are dead. Joe barely had the time for that, checking his watch numerous times during the Dignified Transfer. 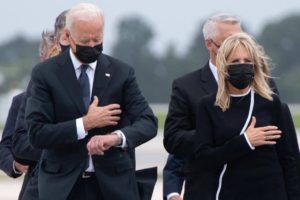 Biden handed a kill list to the Taliban. Now the Taliban are going door to door executing people.

Once more Biden turns his back on America

Joe Biden once again turned his back on the press and America after he again blamed others for leaving Americans behind in Afghanistan. pic.twitter.com/uOay7UstRJ

“If we leave Afghanistan in chaos it will be another time bomb waiting to explode.”

And here we are. Afghanistan is in chaos- a time bomb that Biden has created. We are more at risk than we were prior to 9-11. One wonders how many Haqqani and ISIS will be brought into the US in the chaos of the evacuations. Or they can simply walk into the US across the open Southern border.

Trump instructed me to arrange a conditions-based, methodical exit plan that would preserve the national interest. The plan ended up being fairly simple: The Afghan government and the Taliban were both told they would face the full force of the US military if they caused any harm to Americans or American interests in Afghanistan.

Next, both parties would negotiate to create an interim-joint government, and both sides had to repudiate al Qaeda. Lastly, a small special-operations force would be stationed in the country to take direct action against any terrorist threats that arose. When all those conditions were met — along with other cascading conditions — then a withdrawal could, and did, begin.

We successfully executed this plan until Jan. 20, 2021. During this interval — when there were no US casualties in Afghanistan — President Ashraf Ghani and the Taliban conducted multiple rounds of negotiations, and al Qaeda was sidelined. The result was a successful drawdown of US forces in Afghanistan to 2,500, the lowest count since the dawn of the War on Terror. We handed our entire plan to the incoming Biden administration during the lengthy transition. The new team simply wasn’t interested.

Not only did Biden know what was coming, he asked Afghan President Ghani to lie about it

President Joe Biden wanted the now-departed Afghan president to create the ‘perception’ that his government was capable of holding off the Taliban – an indication he knew it was only a matter of time before the US ally fell to the Islamic group even while reassuring Americans at home that it would not happen.

In the last phone call between Biden and his Afghan then-counterpart Ashraf Ghani, the American president said they needed to change perceptions of the Taliban‘s rapid advance ‘whether it is true or not,’ according to excerpts published on Tuesday.

Biden intentionally lost this war and he really doesn’t care because he’s banking on your stupidity and lack or memory.

Critics who accuse the president of having no strategy miss the point: What we are seeing is the strategy. It is based on Mr. Biden’s confidence that no one will hold the disastrous consequences of his decisions about Afghanistan against him so long as our troops are gone.

In demanding moments, great presidents appeal to the better angels of our nature. But Mr. Biden’s presidency now rests on a cynical bet that, by the time Sept. 11 rolls around, a war-weary American people will share the president’s indifference to what he has now wrought in Afghanistan. We can already imagine his response to any newsman who dares bring it up.

C’mon, man. That was two weeks ago.

Joe Biden is the mother lode of mendacity and incompetence. Peter Wehner:

On national-security matters, President Biden lacks some of the most important qualities needed in those who govern—discernment, wisdom, and prudence; the ability to anticipate unfolding events; the capacity to make the right decision based on incomplete information; and the willingness to adjust one’s analysis in light of changing circumstances.

To put it in simple terms, Joe Biden has bad judgment.

It’s worse than that.

Biden has abandoned Americans, stiffed our NATO allies and left behind those who helped us in Afghanistan- even the man who helped save Biden’s ass in 2008.

He’s utterly trashed our reputation as a nation

An American left behind after U.S. troops completed their withdrawal from Afghanistan on Monday described her fear and frustration during an interview with CNN.

“I just found out that they left and I was just silent for a little while,” the woman, identified as Sara, who was an interpreter in the country for 14 years, told CNN’s Chris Cuomo on Monday night. Sara said she is currently in a house with 37 vulnerable people who still did not know the last evacuation flight had left the country.

“It is heartbreaking. I just don’t even know what to say to you […] Even they did not tell me that it was the last flight so I had hope that we would leave,” Sara said of herself and others in her house, including a mother with disabled children.

“I don’t know anymore, what to believe anymore. I don’t believe in anybody anymore because they’ve been fooling me for the past 10 days,” Sara said.

“If America will not help me when they were on the ground, how will they help me now when no one is here?” she added.

It ain’t gonna be Biden. He refused to take questions as he left for vacation today. Sara needs to be rescued but so do 331 million other Americans.

They need to be rescued from Joe Biden.