Biden surrenders to the Taliban 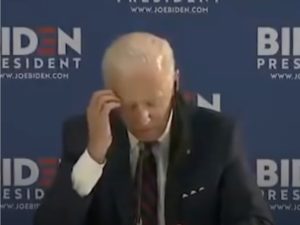 In a not unexpected decision, Joe Biden has surrendered to the Taliban. US forces will be gone from Afghanistan by August 31, the date the Taliban demanded the US be out.

President Joe Biden delivered a snub to his international allies on Tuesday, dismissing the desperate pleas of G7 leaders to extend the Kabul evacuation beyond August 31, after the Taliban issued a chilling warning to western forces who stay and banned Afghans from leaving.

The move gives the Biden administration just seven days to evacuate thousands of American citizens and local allies still stranded on the ground. And it means that officers will have to begin ordering U.S. troops home within days in order to meet the deadline for clearing the airport.

This despite Biden sending CIA Director Burns to grovel and beg for more time.

Americans will be left stranded:

Joe Biden is ending the evacuation of Americans by the August 31st deadline.

Democrat Congressman Andy Kim says that Biden “will not” be able to finish evacuation of Americans from Afghanistan by August 31st. pic.twitter.com/o6xw86evZA

Doocy: “‘There are no Americans stranded’ is the White House’s official position on what is happening in Afghanistan right now?”

Psaki: “I’m just calling you out for saying we are stranding Americans in Afghanistan when…we have been very clear” they’re not left behind. (3/) pic.twitter.com/bjO2NnQxAV

Jake Sullivan bizarrely claims Biden “has been clear” from the start that there would be chaotic withdrawal from Afghanistan.

In April, Biden said “We will not conduct a hasty rush to the exit. We’ll do it responsibly, deliberately, and safely.” pic.twitter.com/2aVewc25IQ

These people have no conscience or morals.

When Biden and his minions once again attempt to shift the blame to Trump let us clearly remember that he said the timeline and manner of the withdrawal from Afghanistan was his decision.

“Mr. Biden, you did this! You planned this. You made the deal with the Taliban. This is the consequences of it.” pic.twitter.com/WPfW4Hh543

Pro-American Afghans are doomed. Stranded Americans will be rounded up and held for ransom, probably on the order of a billion dollars in cash on palettes (that might sound familiar).

This is far worse than the fall of Saigon. It is the fall of American integrity and moral authority.

Americans remain trapped behind enemy lines in Afghanistan. Pelosi just said from the House floor, “Today is a great day of pride for our country and for democrats.” pic.twitter.com/0aS9nbHL7V

Biden has taken a knee to everyone else and now to the Taliban. The Taliban is in charge of the country, not Biden.

The only proper response from America to these dirty savage terrorists should be:

Biden, who has lied non-stop since taking office, should get exactly the same response from America: