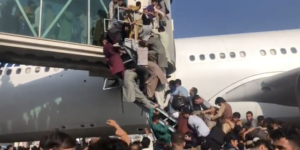 Instead of simmering down, the crisis in Afghanistan is getting worse by the day. It has been likened to the fall of Saigon but that is not a good analogy. The airport at Saigon was controlled by the US military. In Afghanistan the Taliban control everything thanks to Joe Biden’s galactic incompetence. Biden has been reduced to begging the Taliban for favors. He’s “asking” for their help. He looks pathetically weak and he can’t stop lying.

And that is a real big problem.

He said unequivocally that the timeline and manner of the Afghanistan withdrawal was his decision.

Yet he keeps blaming Trump. His weasels assert that Biden is “deeply engaged” in events but I am not sure what events those are. At his last sort of press conference (during which he took 5 questions and still screwed everything up) he took this position:

That was simply untrue.

But ABC’s Ian Pannell reported from Kabul, over audio of gunfire: “For several nights now, we’ve reported on the violence and terror outside Kabul airport, and Americans and Afghans who can’t get through.”

Lloyd Austin, who is committed to rooting out conservatives from the military while seeking to make CRT the main focus at West Point, sheepishly had to disagree

After repeatedly telling Americans that they had to find their way to the Kabul airport, the Biden geniuses are telling people to stay away:

“Because of potential security threats outside the gates at the Kabul airport,” the embassy advised on their website, “we are advising U.S. citizens to avoid traveling to the airport and to avoid airport gates at this time unless you receive individual instructions from a U.S. government representative to do so.”

Just yesterday Biden said that to the “best of our knowledge – Taliban checkpoints – they are letting through people showing American passports.”

In the latest blow to those running up against the clock, Afghan-Americans on Thursday said that Taliban fighters are now attempting to take their U.S. passports and identification orders in an attempt to stop them from leaving the country.

“We’ve made an agreement with the Taliban,” Biden said. “So we know of no circumstance where American citizens are carrying an American passport for trying to get through to the airport, but we will do whatever needs to be done to see to get more.”

Really, who would doubt that the Taliban would keep their word? Here’s another beauty

Following criticism of the United States’ conduct in their withdrawal, Biden says he has seen “no question of our credibility from our allies around the world.”

German politician Armin Laschet, the heir-apparent to outgoing German Chancellor Angela Merkel, described the situation even more harshly. “This is the greatest debacle that NATO has seen since its foundation, and it is an epochal change that we are facing,” he said this week.

,@POTUS just claimed that al Qaeda is “gone” from Afghanistan. Not true. In fact, the Haqqani Network, which is closely allied with al Qaeda, is playing a big role in Kabul right now. The Haqqanis are intertwined with al Qaeda.

Biden actually received a diplomatic cable warning him of the coming collapse of Afghanistan but in his in his typical arrogant and impudent manner dismissed it:

“We’ve learned over the past 24 hours that there was a dissent cable from the State Department saying that the Taliban would come faster through Afghanistan,” Bloomberg’s Justin Sink said at a White House press conference. “Can you say why after that cable was issued the U.S. didn’t do more to get Americans out?”

“We got all kinds of cables,” Biden said. “All kinds of advice. If you notice, they range from this group saying – they didn’t say it would fall when it did fall, but saying that it would fall, to others saying it wouldn’t happen for a long time and they’d be able to sustain themselves through the end of the year.

The Taliban is mocking the US by wearing US military uniforms

And if that wasn’t enough…

Biden said that there was no way to leave Afghanistan without chaos ensuing.

“I don’t think it could have been handled in a way — we’re going to go back in hindsight and look, but the idea that somehow we could have gotten out without chaos ensuing, I don’t know how that happens,” he concluded.

Seems to me that if you knew that you could prepare accordingly. 47 f**king years in government and he doesn’t know dick. At this moment the Taliban controls Joe Biden.

Think about that. And the Stupid River just keeps flowing

ABC BURIES THE LEDE—The State Department sent out BLANK US visas, which were printed and filled out by just about everyone in Kabul, including the Taliban. They’re flooding the country on purpose—and, like the southern border, they don’t want to know who’s here. https://t.co/3jT8CHAq85 pic.twitter.com/GJAiNgscf0

As I noted above, this crisis has been likened to the Fall of Saigon but it’s not. It more resembles the Bay of Pigs when JFK failed to provide air cover. Kennedy learned from that mistake. Biden, the chronic arrogant liar, will never learn.  Neither will his cadre of weaselly elite incompetent snobs.

They’ve cost this country an immeasurable amount. We’re losing the most important thing we have as a nation- our moral authority.

This is Biden’s Bay of Prigs