“We planned for every contingency” Like hell you did 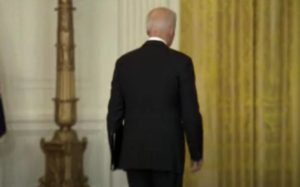 Damn it, I told you so. I am over the top angry.

You know, there are times and there are times and this is one of those times. We are in a very precarious situation because we have a complete a$$hole for a President. He is worse than a paper tiger. I’ve long and repeatedly said that he is a prick and a lying son a of a bitch. The last week’s events have done nothing but vindicated that opinion.

This bastard has had two press conferences during which he has answered zero questions and probably for good reasons- because he is incapable of answering them. When he does speak he does nothing but lie.

Afghanistan is one colossal clusterf**k, as though you didn’t know. For his own egoistic bent, Joe Biden has reversed one after another of Donald Trump’s policies to the detriment of America.

He f**ked the southern border policy, then he f**ked our energy independence (as though OPEC and Russia drilling for oil create less pollution than our drilling for oil), and now he f**ks up our foreign policy. Barack Obama reportedly said “Don’t underestimate Joe’s ability to f… things up.”

Bob Gates said Biden has “been wrong on nearly every major foreign policy and national security issue over the past four decades.”

That a$$hole said “We planned for every contingency.” The f**k you did.

Joe Biden prided himself on reversing everything Donald Trump did. Every damned one Biden did was a f**king mistake.

while Afghanistan was coming apart this is what the Biden regime was focusing on:

Days before Afghanistan was on the verge of collapse… pic.twitter.com/470MMFFHoe

“We will not conduct a hasty rush to the exit. We’ll do it responsibly, deliberately, and safely. And we will do it in full coordination with our allies and partners..”

“We are staying, the embassy is staying, our programs are staying… I would not necessarily equate the departure of forces in July, August, or by early September with some kind of immediate deterioration in the situation.”

“I made a commitment that when I made a mistake, I’d tell you I’ve made mistakes…But I’ll take responsibility for what I do and say.”

Sure, other than to blame Trump. Hey, do you remember when Biden said the timeline and manner of the withdrawal from Afghanistan was his decision?

And how about that that douche tool Kamala Harris, who said she had a key role in Biden’s Afghanistan withdrawal decision? Where has she been over the last week?

And how about those two a$$holes- Marky Mark (where the white rage at?)  Milley and Lloyd “Root out the enemies within and let’s push CRT” Austin? I cringe when I think that the nation’s security depends on those two freaking Social Justice Avengers.

Now Milley Vanilley warns us that “Terror Groups Will Come Back Faster in Afghanistan.”

No sh*t, Sherlock. You were more focused on squashing Trump supporters than you were the real enemy, dumbass.

And the Americans stuck on Afghanistan? Sorry we don’t have a plan for that. But we have planned for every contingency! We are urging people to make a break for the airport! The Taliban have rendered Milley and Austin eunuchs as they can’t offer help to stranded Americans:

Pentagon leaders said at a briefing on Wednesday that the United States military does not have the capability to help the thousands of Americans stranded outside the Kabul airport, which is now surrounded by Taliban checkpoints.

Asked whether the military could help escort Americans outside the airport in Afghanistan to the Kabul airport, where the evacuations are taking place, Defense Secretary Lloyd Austin said, “The forces that we have are focused on the security of the airfield.”

Good God, imagine how it would have been having they NOT planned for every contingency!

And those billions of dollars in weapons? Well, even though we’ve planned for every contingency we don’t have an answer for that! BTW, here’s a list of those weapons.

It’s almost as though Biden wanted to arm the Taliban.

It was curious how during the collapse of Afghanistan neither Biden nor Harris nor Psaki were even around to answer questions. Biden is a demented old lying a**hole, Harris is a cheap incompetent substitute for a real VP and Psaki is Little Red Lying Hood.

This feckless f**k of  regime will not even commit to retrieving all American before it flees Afghanistan.

BTW, Biden seems to have lost his attachment to reality 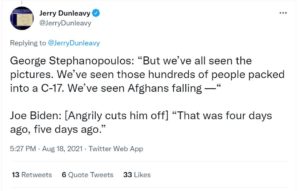 It was 2 days ago

It is estimated that there are between 10,000 and 15,000 Americans stranded in Afghanistan. The Taliban has blocked the roads to the only airport over which the US has any control.  Biden is reduced to begging the Taliban to allow Americans to get to the airport for extraction. Expect this feckless and galactically incompetent regime to have to pay ransom for the release of American hostages. The US has frozen about $9 billion in Afghani dollars. Just watch as that is thawed out for the release of the hostages.

Donald Trump would not have begged. This would never have happened under Trump. None of it.

The Trump plan (you haven’t heard of it because the f**king press doesn’t want to admit it) was far different from the Biden surrender monkey plan. Under the Trump plan, the military would have come out last. Civilians would have been removed first. Military assets would been flown out to keep them out of the hands of the Taliban. Conditions on the ground would have dictated the timeline and had the Taliban gotten out of line they would have been bombed to hell, as they were on occasion.

Remember, on January 20 Afghanistan was peaceful and under control with only 2500 troops and there had not been a combat casualty in Afghanistan in18 months.