Biden has put this country in peril for another 9-11 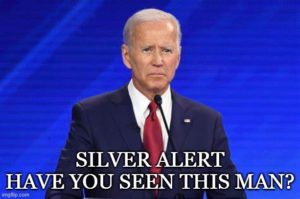 There is a reason former SecDef Bob Gates said

“[Biden] has been wrong on nearly every major foreign policy and national security issue over the past 4 decades.”

Now his mendacity is putting the United States into grave danger. Afghanistan has collapsed and he alone is to blame. Trump had wound down the military presence to about 2500 troops but the Taliban was kept at bay because Trump threatened to bomb the hell out of them and their villages if they reneged on the agreements they made.

“We’re going to come back and hit you harder than any country has ever been hit,” Trump said he told Akhundzada, recounting the threatened consequences if the Taliban failed to make peace. “And your village, where I know you are and where you have everybody, that’s going to be the point at which the first bomb is dropped.”

A few hours after that March 2020 call, Trump put an insurance payment down on the threat. When the Taliban attacked an Afghan checkpoint shortly after Trump hung up, U.S. fighter jets rained down fury on the attackers. A stung Taliban immediately called for de-escalation, saying it was committed to the “plans to implement all parts of the agreement one after another to prevent conflict escalation.”

It worked. Trump, who effectively wiped out ISIS, maintained order with only 2500 troops.

The plan was to remove the military assets and the people in an orderly fashion. Biden, as has done with everything else, f**ked it up. He swore he would stop or change all of Trump’s policies and he’s done much of that to the detriment of America. He took us from energy independence to being dependent on Russia and OPEC for oil. He illegally shut down Trump’s remain in Mexico policy and thrown the borders wide open, leading to a crisis of epic proportions but a boon to human traffickers and smugglers.

The collapse of Afghanistan is a failure of monumental proportions and it could easily lead to another 9-11. When base in Bagram was overrun by the Taliban 5000 high value detainees were freed from prison.

The prison in Bagram — called Parwan Detention Facility — housed 5,000 “highest value” al-Qaeda and Islamic State (ISIS) and Taliban terrorists captured on the battlefield. It also includes senior drug trafficking figures. According to Taliban representative, the prisoners were “being evacuated to a safe place.”

The Taliban captured billions of dollars in weapons left behind by Biden’s stupidity, including MRAP’s, Humvees, an F15 simulator, tanks, specialized drones and thousands and thousands of automatic weapons and handguns. Biden has made the Taliban one of the world’s best-equipped militaries.

All of this has a cost.

Mark Milley, the feckless Chairman of the Joint Chiefs- the guy who made white rage his priority- told Senator that terrorism will return and soon.

America’s top general said Sunday that the United States could now face a rise in terrorist threats from a Taliban-run Afghanistan. That warning comes as intelligence agencies charged with anticipating those threats face new questions after the US-backed Afghan military collapsed with shocking speed.

Gen. Mark Milley, the chairman of the Joint Chiefs of Staff, told senators on a briefing call Sunday that US officials are expected to alter their earlier assessments about the pace of terrorist groups reconstituting in Afghanistan, a person familiar with the matter told The Associated Press.

Ya think? Any of us could have guessed that. Milley is a pathetic jackass and so is Lloyd Austin. Together with that effing moron Anthony Blinken they could be the end of this country. Milley was so consumed with domestic white supremacy and Austin was so preoccupied with rooting out enemies who “lie within our own ranks” that they neglected the little thing known as national security.

So let’s paint the picture. The Biden regime has been consumed with virtue signaling about all else, national security included

The month of June is recognized as (LGBTI) Pride Month. The United States respects the dignity & equality of LGBTI people & celebrates their contributions to the society. We remain committed to supporting civil rights of minorities, including LGBTI persons. #Pride2021 #PrideMonth pic.twitter.com/qgKPQAPaOY

No doubt the Taliban will be respectful of that.

Our military leaders are occupied with social justice, LGBTQ flags, pronouns, and Trump supporters. Afghanistan has fallen and it will lead to a new strong Islamic jihadist state. Five thousand dangerous high-value prisoners were freed. We do owe Afghan cooperators and translators assistance but thanks to Biden in the confusion we’re likely to bring over some highly undesirable elements because of the lack of proper vetting. Failing that, all these high-value ISIS and Al Qaeda operatives need do is find their way to Mexico.

After all, the border is wide open.

You do the math. It’s coming.