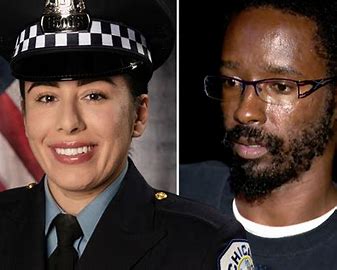 Officer Ella French was murdered last Saturday “allegedly” by a creep named Emonte Morgan. French was shot in the head but the weapon used wasn’t Morgan’s. It belonged to someone who in my opinion is as much French’s killer as is Morgan.

Danzy made a straw purchase of the gun and then sold it to Emonte Morgan, who Danzy knew was a felon.

A Glock semi-automatic pistol was recovered from the yard near where Eric Morgan was arrested, Cook County prosecutors said, which matches federal prosecutors’ allegations that “Individual A” was arrested with the gun after French’s shooting.

Shortly after the shooting, investigators traced both the gun and the car to Danzy, a restaurant worker in northwest Indiana, according to the federal complaint.

Records showed that Danzy bought the gun in March from a licensed dealer in Hammond, where he claimed to be buying the weapon for himself, according to the complaint.

Agents for the U.S. Bureau of Alcohol, Tobacco, Firearms and Explosives on Sunday tracked down Danzy at the restaurant where he works, and he agreed to be interviewed on tape in an agent’s car in the parking lot.

Agents showed him the paperwork from the dealer, and at first, he claimed to have bought the gun for himself, the complaint states. But “after further questioning,” he admitted he had bought it for someone in Chicago — Eric Morgan — who had a felony record and could not buy a gun for himself.

Danzy told officials that he and Morgan have been in a relationship for about three years, according to the complaint. Morgan gave Danzy money and told him exactly the type of gun he wanted Danzy to purchase for him, the complaint states.

And he went to Indiana to pick up the gun shortly after Danzy purchased it, according to the complaint.

And months later, on Saturday night, both Morgan brothers were taken into custody after the traffic stop where French was killed and her partner wounded.

Brown said the amount of illegal guns in Chicago and across the country is helping to drive an ongoing violence spike.

“The role of the justice system, particularly that of federal prosecutors and judges is more important than ever,” Brown said in the statement. “And by allowing Mr. Danzy to walk free the court has done a disservice to Officer French’s memory, to the entire Chicago Police Department, and to the thousands of men and women across the country who work around the clock, day in and day out to stem the violence that is plaguing our communities.”

And there it is.

Guns in Chicago are obtained illicitly through straw purchases. If convicted, Danzy is said to be looking at a possible 5 year sentence. Unfortunately, that seems unlikely. In a prior similar event in Illinois a man who illegally sold a gun later used in a murder was given a sentence of one year plus three years probation.

This is not just wrong, it’s abominable.

Slam every person who sells a weapon illegally with a 25 year mandatory sentence and people will begin to think twice.

But Illinois, and Chicago in particular, is not serious about stopping crime.

Bagpipe Honor Guards are traditionally offered for fallen police officers. Lori Lightfoot, the gloriously incompetent Mayor of Chicago who called for defunding the police, railed against the Honor Guard for French and the Deputy Police Superintendent Eric Carter said  ‘We don’t have 20 minutes for this s**t.’

That is how Chicago regards cops and that’s why cops turned their backs on Lightbrain. Chicago is f**ked with these idiots in charge. Nothing will change until the house is cleaned of this trash.

Gosh, if only Morgan was required to submit a background check before he bought the gun from Danzy, all of this could have been avoided, for Morgan would then have been prohibited from buying the weapon. If only…. WHY DIDN’T WE LISTEN?!?

No gun advocates opposes stiff penalties for gun crimes. Only LIBERALS oppose such penalties. In fact, they seem to oppose ALL penalties for ALL crimes. Morgan was out on probation and also awaiting a trial date for a hit-and-run! Stupid liberals killed French. No one is safe when they have power.

Beetle Juice will be giving Danzy the keys to the city.

All the Gun Control Laws passed by the Stupid Jackass Party(Liberal Democrats)is not going to stop Crinimals from getting guns all the Confiscation or exchanging your guns for Gift Certificates or a measly $50:00 is not going to make a difference just get to appear on the Morning News Programs with Dan Blather or Tom Brokejaw

Nazis Are Actually Fine Now, According to the Southern Poverty Law Center and Anti-Defamation League

Too bad we don’t have sane leadership saying this!