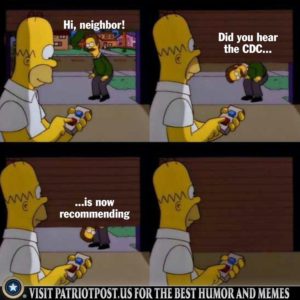 With the passage of time it becomes more and more clear what things are affected by COVID 19 and what things are not. Among the events which spread COVID 19 include church services, school classes, Trump rallies and Sturgis.

Things that don’t spread COVID 19 are wherever Nancy Pelosi is, BLM protests, illegal aliens, democrat wedding receptions (especially when Muriel Bowser is there), Lollapalooza in Chicago, Pelosi’s hair salon, AOC taking her mask off for a photo shoot, Rashida Tlaib dancing without a mask, the French Laundry restaurant (When Gavin Newsom is there, anyway) and Obama’s 3 day birthday party. 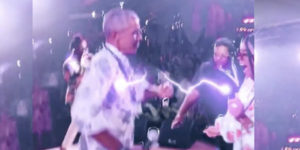 Then we have a buffoon named Fauci who scolds the attendees at Sturgis but doesn’t even mention obama and his elite maskless affair as though somehow being a democrat automatically confers super immunity to all COVID variants. This same jerk demands children wear masks but “hopes” it won’t harm them long term. But it’s OK that no masks were worn at the obama event, you see. According to the NY Times White House correspondent the blue state people at the obama party are “sophisticated” in contrast to the stupid red state rube hillbillies at Sturgis.

Viewers ripped CNN’s Jim Acosta this weekend for suggesting that at least one of the new variants of the coronavirus be named the “DeSantis variant,” claiming Florida Republican Gov. Ron DeSantis has prolonged the pandemic for not enforcing mask mandates and other restrictive measures.

“People should not have to die so some people can own the libs,” Acosta said on Saturday. “But they may end up owning the pandemic, because they’re prolonging it.” Acosta declared it was time to rename the delta variant after the Florida governor.

Biden has weaponized the FBI, CIA, the DOJ and now the CDC

The Florida Department of Health took to Twitter on Monday to ask the Centers of Disease Control and Prevention to update its COVID-19 case tracker for the state because it incorrectly combined “MULTIPLE days into one,” which made the Sunday daily case count explode to the state’s worst ever.

The department said it follows the CDC’s guidelines for reporting cases. The CDC reported 28,317 new cases on Sunday, which WSVN reported would mark the most confirmed infections in one day in the state since the beginning of the pandemic.

He too had no criticism of the obama self-indulgence. Separately, the medical term “anus” is now to be replaced by “acosta.”

The Delta variant is now the occupation of the left wing media. Note, however, that while Delta is more contagious it is less lethal. Problem is, Fauci has another variant ready to go- the lambda variant, but CNN says the vaccinated are protected– at least for now.

While some have questioned the risk of the emerging Lambda (C.37) variant, researchers aren’t yet seriously concerned about current vaccines not working against the Lambda nor Delta variants, Dr. Francis Collins, director of the National Institutes of Health, told ABC on Sunday.

This will without a doubt be affected by the polls over the next year.

I am fully vaccinated and am in favor of vaccination but also feel that not all need or should be vaccinated. Children are at low risk (teachers should be wearing masks) and pregnant women should be cautious. I do find it highly irritating that it is continually asserted that the vaccinated can spread disease but there really not much evidence for that. Most of it is based on two studies- one came from India where an unapproved vaccine was used and the second one came from Provincetown. This is a gay community and the period begin examined was something called “Bear week.” The cohort in the study was 85% male. There are some details to be made clear:

There is some highly pertinent information supplied by a gay activist:

If the CDC has increased their Delta Ro because of the Ptown cohort, then they are overstating it for the general population. The cohort was 85% male (WaPo and NYT have both failed to mention this). Hello, it was Bear Week. @apoorva_nyc rightly mentions packed bars, etc., but /1 https://t.co/VGYHqPMqQ3

If you asked an ID expert to suggest the most efficient way for an infected vaxd person to infect another vaxd person, she’d say “let them deeply kiss for half a minute.”

Hoping CDC used other cohorts for their new Ro. Ptown’s is skewed by (gay) boys being boys. /end

So there were loads of men kissing other men for prolonged periods of time. In no way does this cohort representative of a typical public gathering. If that’s not enough, let the study speak for itself.

First, data from this report are insufficient to draw conclusions about the effectiveness of COVID-19 vaccines against SARS-CoV-2, including the Delta variant, during this outbreak.

So NPR and anyone else suggesting otherwise is simply lying to you.

One gets the feeling that each time we seem to be settling down that Fauci has the CCP release another variant. At this point I have no doubt that the end game is to have a #nov2022variant that will demand mail in balloting, ballot harvesting and drop boxes wherever illegals aliens are housed.