The Olympics – What We’ve Lost as Americans 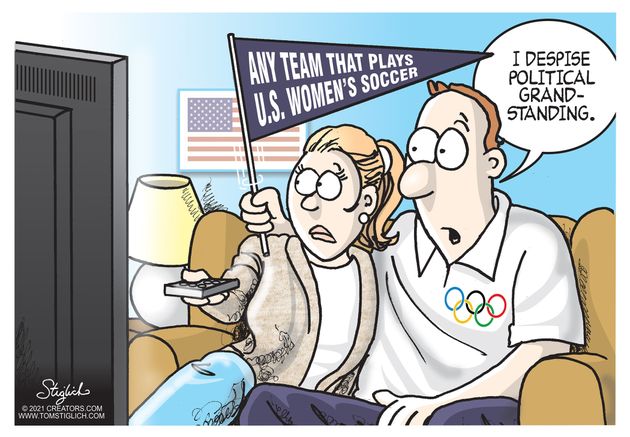 Remember the days when everyone watched the Olympics to see America’s best athletes represent us on the world stage? To be honest, while I’d always watched the Olympics, I never tuned in wall to wall or went too crazy over them. I was always waiting for the day that American football got added as a sport looking forward to seeing the USA beating whatever opponent 49-0… at the end of the first quarter. But that aside, there still is something really cool about seeing the joy in the faces of our Olympians celebrating winning gold medals, and seeing them on the medal stand as our National Anthem plays. Or at least there was. Now we’re treated to exhausting rounds of selfish protests, amplified by the Radical Leftists who’ve taken over sports media and choose to amplify these stories instead of the hardworking athletes who simply get the job done. Think about it –  what stories did you hear about the most leading up to the Olympics, tales of promising athletes looking to represent their country, or the nasty protesters?

Ace’s Oregon Muse gave a quick roundup of how the Wokelympics are going:

Megan Rapinoe got to be the face of an underachieving soccer team.

Professional Ingrate Gwen Berry finished 11th… out of 12 in the hammer throw.

And “Laurel” Hibbard, a Dude in a Dress (DIAD), representing as New Zealand’s powerlifter, didn’t even make it out of the qualifying round. Although I wish he had, for the same reasons that Muse states.

I would also add that ratings are down, and advertisers are understandably annoyed. Muse also forgot to mention our men’s basketball team getting embarrassed in a loss to… France. Even worse for me personally, after the fact, I realized that I was rooting for France to win because their players were less anti-American than ours. France. YouTuber Mecharandom 42, in a video on a completely different topic, made a great brief point about not representing a country you don’t like.

This brings me to the one story in this Olympics that truly interested me, but one that I doubt you heard about. Unless you follow the women’s 400M hurdles, of course. Sydney McLaughlin, one of America’s top prospects for a gold medal, happens to be an alumnus of my high school. And while I missed her first two races, there was no way I’d miss her Tuesday night run, scheduled for @ 10:30 PM. Equally cool was seeing the watch party being held at a bar up in Jersey and Sydney’s old Principal (also my old Principal – what is it about Nuns that makes it seem like they live forever?) sitting front and center. Yes, brief flashes of this actually made it on the air on NBC. And then came the race itself, and an old feeling came back.

Any longtime sports fan has at one time or another experienced what can only be called “The Sports High”. You know that feeling when some improbable or slump-breaking victory happens and you are jumping and shouting like a giddy ten-year-old. I’ve experienced it three times in my life. The first was when the 1998 Atlanta Falcons capped off an improbable comeback victory over the heavily favored Vikings. I still remember watching Morten Anderson’s kick sail through the uprights, jumping up and down in my buddy’s living room in Tampa and screaming “I’m going to Miami! (where the Super Bowl would be held that year) I am going to MOTHER (Fudging) MIAMI!!! while doing D-Generation X crotch chops (hey, it was the 90s). My second would come on a college football Thursday night in November 2006, when then 9-0, and perennial doormat, Rutgers (the alma mater of Father Bob) beat also undefeated and #3 ranked Louisville on a last-second field goal to secure a bowl bid. Even though it was probably @ 11:30 at night, I called my at the time 70-something-year-old dad to congratulate him. He picked up immediately and the first words out of my mouth were “I know it’s too late to call, and I also know you weren’t sleeping.” I was right, and he emailed later that he was so fired up he didn’t fall asleep until 3:00 that night. And my third was… well, anyone who knows me also knows that before the NFL said it didn’t want me as a fan anymore I bled Eagle Green, and Super Bowl 52 ended years of frustration – when Brady’s last desperate pass bounced harmlessly on the turf the collective scream that went through The District Anchor and the next few hours was like nothing I’d ever experienced. Sorry for the tangent, but it was needed to set the stage for my fourth Sports High..

As I watched the race, the focus was on Sydney and also favored American runner Dalilah Muhammad. The announcers pointed out that Sidney was doing a great job of pacing about halfway through, and then she poured it on. I was on my feet, jumping up & down, and trying not to make any noise that would wake Little Bob as Sidney captured the gold. The combination of her win and seeing the old Union Catholic crowd going nuts for Sidney brought that old feeling back. And then hearing Sidney and Dalilah’s interview immediately afterward –  both happy, humble, and honored to bring home the wins for America was damned refreshing. And both thanked God for helping them achieve their success – that interview was the perfect cap to an amazing moment.

And afterward, I was reminded of how much I miss the camaraderie of sports. I miss just being able to sit down at any bar with a game on and being to be able to almost instantly connect with almost any stranger over a beer. Now there isn’t a pro sports league that hasn’t allowed the stench of Marxist politics to taint the experience. I know that it’s gotten to the college level as well, but not as bad and I’m still able to watch college football and the NCAA tournament. It was just a few days ago that I took all of my Eagles jerseys, shirts, and other assorted gear that has been unworn for the last year and put it all into storage in our attic. I’m not pitching it, burning it, selling it, etc. I know that it will be years before I even think of wearing them again. But eventually, the world will move on from The Kung Flu Pneumonia and the Boogie Wuhan Flu. And when that happens some wealthy sports fan with an itch will launch a pro sports league to compete with one of the bigs (XFL 3.0? Come on Vince McMahon, here’s your chance to finally not be the bigger (sphincter muscle) in a fight!). And this will be a league for actual fans of the game, with the only “political” messaging being love for America. And when this happens the other leagues will take notice and evolve, or die a much-deserved death.

I only hope that the purge of politics from sports happens in my lifetime – I know I’ll enjoy watching sports be one thing that unites Americans again.

“Congratulations sir! Your city has been chosen as grand prize winner of a genuine National Football League team!”

“Because Buffalo won’t build me a free stadium.”