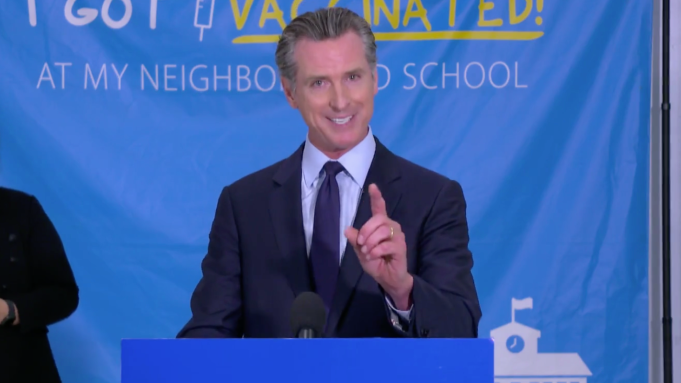 A recent  poll came out from Emerson on the recall of Governor Gavin Newsom, a Democrat, showing a statistically tied race among registered voters, 48 no, 46 yes. While this is a terrible sign for Newsom and the Democrats, this does not shock me, as I have seen a gradual but real shift in the community and the numbers make sense. The most shocking internal in this poll was that Hispanics were the only racial group to overwhelmingly support the recall, and they do by a landslide, 54-41. Black and Asian majorities, in contrast, are supportive of keeping Newsom in office.

One of the key takeaways, when we defeated the racist and divisive Proposition 16 (affirmative action), was our strong support against race-based preferences from Latina females, who worked hard (most times, juggling careers and parental duties), and were concerned about fairness and meritocracy. Especially those with skilled jobs, such as x-ray technicians or lab assistants in professional settings. The last thing they wanted was to be leapfrogged in the hiring and advancement processes by others who are less qualified. But what was noteworthy was that they ignored the ads from the opposition which focused on promoting figures like Gavin Newsom and Kamala Harris and painting the “No on 16” side as racist Trumpers. This hyperbolic ad backfired and ignored the issues and concerns of everyday people.

Fast forward, less than a year later, and support for the recall has grown. Just in March, only 45 percent of Latino voters were supportive of the recall. Now it’s 54 percent. This slow “drip” has been a long time coming. Last year, we saw Trump improve his numbers in this state over his performance in 2016, making major inroads in inner-city Hispanics. The trend was not isolated to Texas and Florida, where Hispanics broke for Republicans for the first time in a century in West Texas, and almost won Miami/Dade outright. This trend was also not isolated to Cubans, but now, Mexicans who have been here for many generations.

I have always asserted the immigration and ICE bogeyman hysteria the left ginned up was going to backfire on the left. After the fearmongering, and subsequently no significant number of deportations except criminals, many Hispanic Californians were oversold the evil of Trump and Republicans and figured out their worst fears didn’t come true.  Now, they feel betrayed by the Democrats and it’s showing in the polls and in voter habits.

The overall divisiveness of Democrats has also backfired. Many Hispanics are friends with other races and will not stand for such hatred, especially in a culture that is so family-oriented and loving to their neighbors and community.  However, with last year’s obsession by the left on #BlackLivesMatter and this year’s #StopAsianHate, where does that leave the Hispanic community? In the inner cities, divisiveness has existed forever through race and gang wars. There is a way to talk about race that addresses the dangers posed to Hispanics, for example, being disproportionate, many times, to other races and high in raw cases in inner-city environments.

Hispanics, especially, are looking for true criminal justice reform, not empty epithets which is all the Democrats have offered. Talking about the problem is not acceptable when certain Democrats have openly admitted that they perpetuate the homeless problem so they can get elected. God forbid, actually solving or working towards solutions to problems. And certainly reduced sentences, like removing gang enhancements, as District Attorney George Gascon has done, make no sense to the average Latino voter. Reform doesn’t mean disregarding the law, dismissing sentencing requirements and special enhancements, and distorting justice.

But how about everyday life? Growing up around Hispanic families, which adopted this Chinito as their own, involved our special moments and milestones like birthdays, quinceaneras, and even weddings are held in the park or community centers. Newsom’s policies on homelessness deprive many minorities of their right to enjoy these public spaces which are affordable and accessible. Sorry, it’s a little bit of a buzzkill to have your birthday party interrupted by a homeless person shooting up drugs and making loud outbursts in the same space as you on your special day. Newsom appointed George Gascon in San Francisco and ruined that city, and now Angelenos are seeing Los Angeles turn the same way. A trip to Downtown LA will shock you if you haven’t seen it in, say, the last 4 years. The decline is real.

Defund the police doesn’t work with Hispanic families, especially in the inner city. Respect for authority is a fundamental component of Latino culture and Gascon and Newsom’s policies undermine that very foundation. Besides, on a practical level, the police keep some of the most dangerous inner cities safe.

Hispanic families also care about school choice and quality education. Now that public schooling has gotten so partisan and ideologically left, Hispanic parents are rebelling against critical race theory and radical sex education. And many certainly have issues with mandatory vaccinations, when so many have survived with old grandmother remedies. Isn’t it slightly condescending to disregard or throw out natural remedies that have worked for generations? I’ll take that Vicks Vaporub over an injected shot any day.

Finally, the most controversial is illegal immigration. The Democrats claim to care so much about undocumented workers. But yet legislation like AB5 has actually ended up hurting the undocumented workers it claimed to be protecting. In reality, it was to get a cut of taxes from independent contractors like Uber, Lyft, and app-based drivers. The face of the bill was the National Domestic Workers Alliance (NDWA) trying to promote their protection of workers, especially Hispanic maids and housekeepers, but in the end, these big labor activists only helped organizations with multiple employees. AB5 ultimately ended up being an attack on solitary independent contractors and did nothing to help undocumented workers. The citizen testimonial of that bill, Carmel Foster, regrets being used to pass the bill and is now doing all she can to wake people up about her story and the ultimate end effect of a bill that was passed through to help many Hispanic independent workers, but now has ended up hurting them, and others outside the community. So bottom line, do Democrats help the Latino American community or those who are undocumented? The answer is a resounding no, and every day, people are waking up to this.

Thankfully, the Hispanics did not fully go on the Democratic plantation. About a third of the electorate in California stayed Republican and many of the rank and file is essential, by lifestyle, conservative. But now, their values are finally aligning with their voting habits. Many Hispanic Democrats have woken up, especially in the Central Valley and areas where real problems trump partisan bickering, such as farmers not getting their water to survive, rising crime in our cities, and the quality of education in schools. I foresee this alignment continuing because the Democrats’ false promises and redirecting priorities have gone long enough, and Latino Californians have been left in the dust. Now they are awake to the betrayal and are overwhelmingly supporting “Yes on Recall”.