Why did Ashli Babbitt have to die?

It seems a**holes are not limited to the democrat party.

Kevin Cramer is a Republican Senator from North Dakota. In an interview, he said he’s “grateful” that Ashli Babbitt was murdered by a Capitol cop.

While fielding questions as part of a radio program, North Dakota GOP Senator Kevin Cramer called 14-year Air Force veteran Ashli Babbitt a “criminal,” and said he’s “grateful” for the Capitol Police Officer who killed the unarmed January 6th protestor for “not complying” with his orders from the other side of a barricaded door.

He is a a**hole. But then he said something that caught my attention:

“The person that shot her is a police officer shooting a criminal not complying with officers telling her, ‘Stop. Don’t come through that window. We have guns drawn. Don’t do it,’” Cramer said. “They’re protecting people, and the officer was found to be innocent of any wrongdoing. So then what would be the purpose of releasing that officer’s name? What do you need to know the officer’s name for?”

The killer apparently is Lt. Michael Byrd and there really is little doubt about that.

“For crying out loud, if you shoot an illegal alien we’re going to know that police officer’s name,” the caller told Cramer. “This is a police officer that shot somebody in our capitol and his name is being withheld!” Still, Cramer backed the move not to release the officer’s name, telling the caller that he would look into what the laws surrounding the decision before remarking that he is “grateful” for the officer that shot Babbitt. “I’m just grateful for the person quite honestly,” Cramer said as the call was ended.

Ashli Babbitt was unarmed. There was a SWAT team right behind her. These guys. 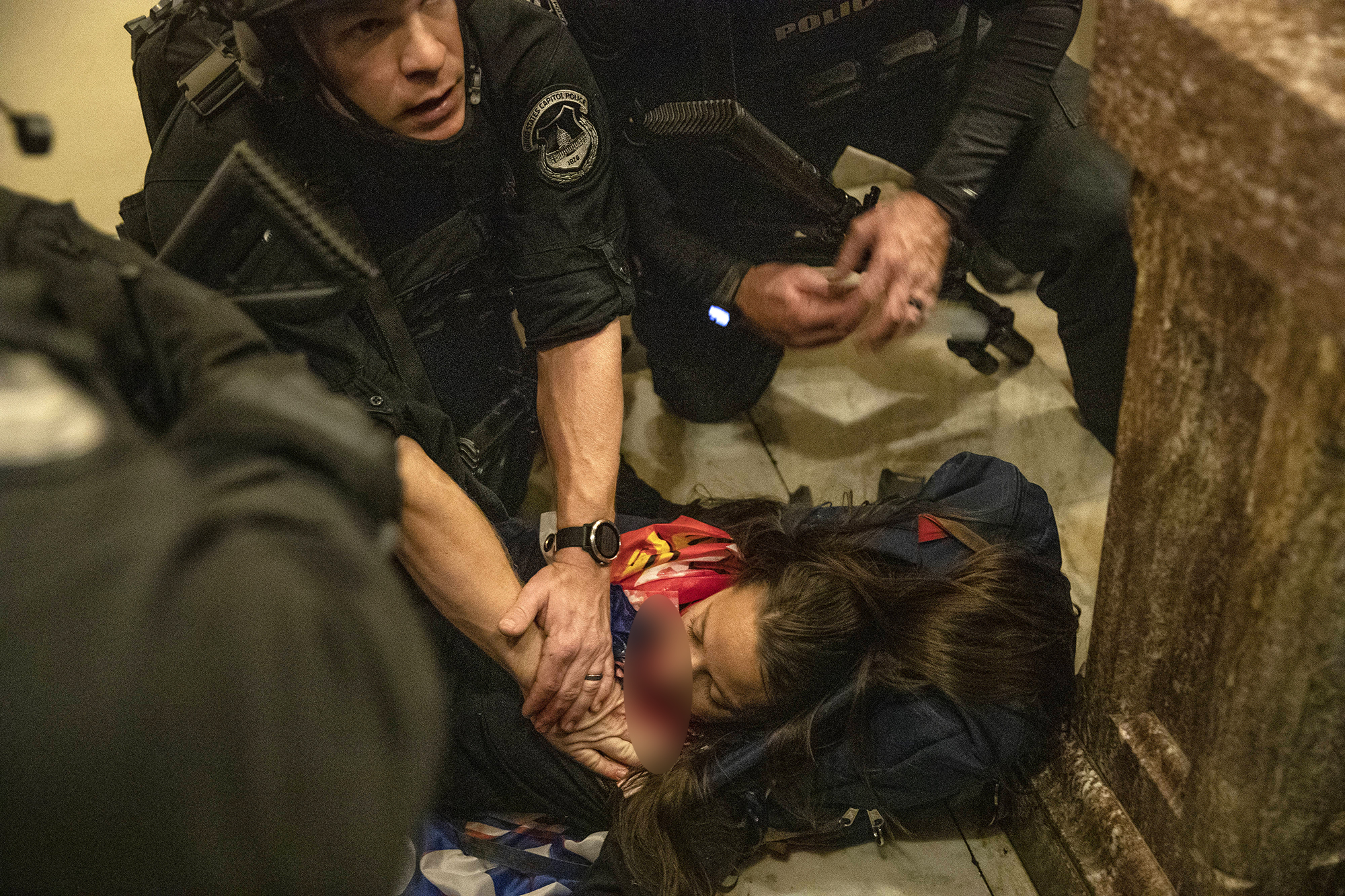 See the number of cops behind her who did not attempt to stop her. Watch it unfold. Watch as the cops do nothing to stop her. In fact, they draw away from her just before she is shot.

It makes one wonder why one set of Capitol cops did nothing to stop her from trying to enter the next chamber and another chose to execute her. Those same cops stood there and did nothing but watch as the windows were being smashed and Babbitt attempted to go through one.

But let’s cut to the chase here. In this case, a woman was killed for not complying. George Floyd was killed for not complying. This Senator is grateful Byrd killed Babbitt and Byrd is not held accountable. Chauvin goes to prison for killing Floyd. She didn’t comply. Floyd didn’t comply. Byrd didn’t try to shoot Babbitt in the leg as Biden once suggested. He literally went for the jugular. He shot to kill.

NOT ONE Jan 6 protester has had a weapons charge filed against them. No one has been charged with insurrection yet scores are being held without bail to this day for non-violent crimes.

And yet now when it comes to their perceived safety, legislators are fine with executing Americans for trespassing. It all depends on who’s not complying with whom, I guess.