Until the border is sealed you can shove your mask mandate 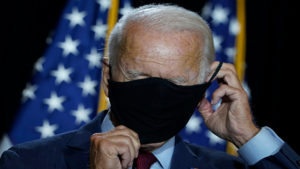 As illegal aliens pour into this country through an open Southern border, a new mask mandate is coming and they say it’s all about science. Minority leader Kevin McCarthy disputed the need for a new mask mandate and Nancy Pelosi called him a moron.

WASHINGTON – Director of the U.S. Centers for Disease Control and Prevention Dr. Rochelle Walensky expressed concern over new data that shows that vaccinated and unvaccinated people infected by the delta variant of the novel coronavirus carry viral loads that “are actually quite similar.”

“We are actively conducting outbreak investigations of what’s occurring in places that are having clusters… What we’ve learned in that context, is when we examine the rare breakthrough infections and we look at the amount of virus in those people, it’s pretty similar to the amount of virus in unvaccinated people,” Walensky said.

Great. “Rare breakthrough infections.” Many were asking where is the data? I know more than a little about research and I was also asking. Thus far, all we’ve got is this thing from India

At least one of the studies that was cited by the Centers for Disease Control and Prevention (CDC) to justify changing their guidance on masks was based on a vaccine that is not authorized for use in America and was rejected by a peer review. The study in question from researchers in India analyzed vaccine breakthrough in over 100 healthcare workers and claims to show that a COVID-19 Delta variant infection generates a higher viral load in comparison to other variants.

Despite no mention in the study of viral loads from the variant against unvaccinated individuals, the CDC cited it in yesterday’s updated brief as evidence that the Delta variant is transmissible from a vaccinated individual with a breakthrough infection.

And here’s the money part

“Studies from India with vaccines not authorized for use in the United States have noted relatively high viral loads and larger cluster sizes associated with infections with Delta, regardless of vaccination status,” the CDC said.

“These early data suggest that breakthrough Delta infections are transmissible,” the CDC’s brief goes on to say, even though the India study was conducted with a non-approved U.S. vaccine.

Fauci is now down to guessing

Back in April, the CDC said this

After warning for months that vaccinated people should still be cautious in order to not infect others, the Centers for Disease Control and Prevention suggests they may not be at much risk of transmitting the coronavirus.

“Vaccinated people do not carry the virus — they don’t get sick,” Dr. Rochelle Walensky, director of the CDC, told MSNBC’s Rachel Maddow on Tuesday. That’s “not just in the clinical trials, but it’s also in real-world data.”

Americans, young and old, regardless of the data, are going to be forced to wear masks again. If you’re a COVID positive illegal, however, you are under no such restrictions.

The Southern border is wide open. Apprehensions are at a record level. Illegals are being processed, released into the country, and are being shipped to undisclosed locations around country. Illegals are being released without a court date and told to report to an ICE office but only 13% are doing so. This is wrong on many levels but there is one big red flag. Thousands of illegals being released into the country are COVID positive. There is a 900% increase in COVID positive “migrants” in the Rio Grande valley. A “migrant” family, maskless, coughing and sneezing in a La Joya Whataburger, told a local police officer they were apprehended by border patrol and released because they were sick.

At a time when visitors from highly vaccinated countries are not allowed to enter the country and Americans are restricted from visiting Mexico and Canada COVID positive illegal aliens are being waved into the country and dumped in towns. Every illegal alien dumped into a local municipality represents a tax increase because of the need for economic support but it’s worse than that. This is one gigantic Biden created COVID super spreader and before it is ended and the border secure Biden can take his mask mandate and shove it.

You can expect one variant after another through the 2024 elections and the manufactured need for democrats to control the elections.

Hey Doc… didn’t you hear? There is no border crisis. It’s closed and secured.

Perhaps the vaccines (developed by Operation Warp Speed) are too much of a success. Idiot Biden’s puppeteers needed something to tarnish the tremendous success of the vaccines by opening up the southern border during a pandemic then spreading infected illegal immigrants all over the nation, unsupervised, undocumented, untracked.

During the initial epidemic, many governors imposed unconstitutional restrictions upon citizens in the name of “public safety”. No travel, no visits, no parties, no vacations (unless you are connected to the Democrat government). Yet when Governor Abbot in Texas declares he is going to restrict the travel of illegal immigrants, 10% of whom are infected and infectious, the hack Garland threatens him with legal action for infringing into the federal realm.

Apparently, only citizens are allowed to be trampled over. Illegal immigrants get all the protections and benefits US citizens are being denied. That’s the idiot Biden mindset. Absolute power to do whatever they want to whomever they want whenever they want. That’s kind of a standard characteristic of totalitarian regimes.

Don’t forget Doc. After listening to Fauci berate DR. Rand Paul for daring to question (the science), one must assume you would be considered another “”wrong kind of doctor” or some other insane whatever just to say only they can be right.

Personally, my gut says it’s all a sham and worse

when all the illegal alien’s are vaccinated and identified, than one could possibly wear a mask to protect themselves from self righteous demorat congressional members, the pedophile, the pedophile’s cabinet, and the vp slut. It is obvious that the demented idiot and the majority of his narcisistic cabinet members, the illiterate ag, doofus garland have never been to the Hartland of America. bar fly, alcoholic pelosi (entitled elites and communist) and kamaslut have no idea of where or how the food they eat is placed on the table. they are unaware of the kitchen staff, the farmers( Paul Harvey, “So God Made A Farmer), the truckers, and food preparation personal. These people do and will never wear a mask, bow to a despot, or kiss the ass of a career lair, pedophile and demented faux pres.
fauci is a liar as is the pedophile, and the cdc is the propaganda mill of the wipe house.
America, STOP drinking the Kool-Aid.