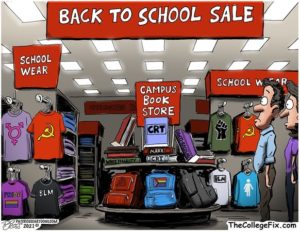 Apologies if seeing me writing and posting somethiing with this title made you spit out our beverage. But those of you who know me also know, just like with my Conservative Case for DC Statehood, I’m going somewhere with this. And trust me, my plan will be something that conservatives can support. No need for a lot of setup, so let’s jump straight to both sides of the argument.

Those against loan forgiveness argue that everyone up to this point has had to pay back the loans they took out, so why should this generation get special treatment? And doesn’t this make suckers out of everyone who worked hard and actually paid back their loans? For that matter, if taxpayers end up picking up the tab, does this not discriminate against working class Americans who never attended a university? There are many other points we could argue here, such as subsidizing some pretty worthless degrees, but we’re only talking high level today.

Now for the side advocating for loan forgiveness. Today’s student loan debt isn’t anything like previous generations have had to handle. For example, the University of Delaware, the fine school that keeps devaluing my degree by advertising that the world’s most famous dementia patient also graduated from there many years ago has seen its tuition jump significantly. Back in 1987, a degree there cost just shy of $43,000. Today, that same degree will run you @ $140,000. That’s not a student loan, that’s a mortgage, and it’s not fair to saddle someone just out of school with a debt like that. Except for anyone with a degree that has the word “studies” on the end of it – they deserve whatever they get for the fact that they contribute nothing to society, and their presence actually is a drag on our economy. OK, that last part is actually my personal observation.

Now for the solution. To quite The Vodkapundit, “Embrace the healing power of And.” Nobody is entitled to “free” (meaning paid for by someone else) education, and people who didn’t go to college shouldn’t have to pick up the tab for those who did. You took the loan, so you have responsibility to pay it back – that’s how life works. If you didn’t want the massive debt, there are many other ways to pay (off the top of my head, the GI Bill and working for a company that offers tuition reimbursement immediately come to mind).

But the Forgiveness Crowd has a point. If that degree from DE had risen at the rate of inflation, that 1987 degree would cost $103,000 today. Still not cheap, but $37,000 isn’t exactly chump change. So why not just make students responsible for what they would have paid if tuition had risen at the rate of inflation? Already paid your loan? No problem – you get a rebate for the difference! “OK Brother Bob”, you may be asking. “I’m skeptical, but interested. Who gets stuck with the bill?” I’m glad you asked!

Obviously, I’m not handing the $37K bill to the student. As you’ve probably figured out, sticking the taxpayer with the tab is also a no-go. Maybe both sides have been looking at this all wrong. Why don’t we look at who’s been profiting from this mess – the universities themselves! Take a look at how much money is in the coffers of various universities and foundations. They can certainly afford to spread the wealth around to those less fortunate. “That’s outrageous – your idea will bankrupt us!” the universities might respond. To which I say… “the program is working.” Can’t afford this bill? Great, how about if you strip down to just the faculty and support staff needed to actually educate our nation’s young men and women? Lose the rock climbing walls, downgrade the food from gourmet to good, and for the love of God, fire anyone with the words “Diversity”, “Inclusion”, or “Equity” in xir’s job title. What you’ll have left might look a lot different, but in the long run it will be far more sustainable.

“But Brother Bob, you twisted genius,” you might be saying, “As someone who was on board with The Tea Party from the beginning, doesn’t seizing private assets violate all of your principles?” Excellent observation, and you are correct! You know what else? I don’t care, and neither should you. Remember that old quote from Lenin, “Capitalists will sell us the rope which we will hang them with”? Well, free market, limited government capitalists have been selling higher education the very books that their graduates will use to build the pyres when they come to burn us at the stake. Mark Bauerlein at American Greatness made a great point about CRT:

Most of the citizens in those states would have rejected the race talk of the professors had they the chance to hear it—and I include most 1990s liberals in the group of ordinary Americans who didn’t like such separatist attitudes—yet they were bankrolling it the whole time. In effect, they were paying the professors to describe an America that is racist, sexist, nativist, genocidal, and imperialistic. A small farmer in North Carolina whose father served in the Pacific helped a professor at UNC-Chapel Hill to travel to a conference and explain that Western Civilization was a colonialist enterprise that exploited, enslaved, robbed, and “Othered” peoples of color for centuries, and has lied about it ever since.

Whatever our higher education system was, it’s morphed into something disgusting and absolutely anti-American. Why should we feel the need for civility toward an institution that has all but declared war on The United States? And when you get down to it, doesn’t pushing this kind of debt onto 17 and 18 year olds sound a lot like predatory lending? I’m all for honoring one’s debts, but when I had an elderly family member pass away who had spent quite a bit of money in her lifetime at QVC, I felt little sympathy when their last credit card bill to her went unpaid.

And if you’re still hesitant to push my idea over personal principles, take a look around. Times have changed, and we have to adjust our tactics if we’re going to save this country. And if there are any nimrods from Media Matters reading this, no I’m not calling for any violent nor illegal actions. I’m working on a much bigger piece that will talk more about how much America has changed, but that’s for another day. For now uprooting the rot that is higher education can make for a good start. And not for the benefit of anyone with the words “Diversity”, “Inclusion”, or “Equity” in Xir’s job title.

And for those of you looking for The Week In Radical Leftism, I’m taking a news cleanse for the rest of the summer – TWIRL returns in early September. I’ll keep shooting out relatively short thought pieces to tide eveybody over.

It took just fifty years for the colorblind teachings of Martin Luther King, Jr to go from embraced ideal to denounced as racist badspeak.