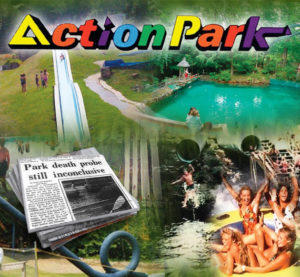 Having cut the cord from the cable companies years ago (And saving roughly one grand per year in the process), we generally sign up for HBO for a month or two each year to either binge watch some show that we like or to catch a big movie sooner than later. On our last sign up a few months ago I came across a gem of a documentary called “Class Action Park” (CAP), the story of an amusement park in northern New Jersey back in the 80s. I found this movie particularly interesting, as I’m one of what can only be a handful of guys who have the unique perspective of having both financed the park as well as enjoyed it as a customer. If that sounds like a strange claim, I promise you that this will all make sense soon enough…

Let’s start with the financing part. My first job out of school was in a Boiler Room operation. I worked 80 hours per week pushing high risk / potentially high reward stocks. Think of The Wolf of Wall Street (minus the hooker & coke), or the dead on accurate speech Ben Affleck gave in Boiler Room, an otherwise forgettable movie. One of the stocks we pushed was for a company called Great American Recreation (GRAR – its NASDAQ ticker symbol). This was the holding company for a number of golf courses, ski slopes, and an outdoor amusement park in the Vernon Valley / Great Gorge area known as Action Park. The owner, Gene Mulvahill was mostly backed by a shady financier by the name of Bob Brennan. Both names, especially Gene’s, would come up in CAP.

Just before the stock’s initial public offering (IPO), we had what’s called a Due Diligence Call. My take on the ones we had was that they were basically our version of a pep rally for stock brokers. The meeting for my office in the DC area was personally attended by Brennan, and had Mulvahill on the call up in New York. At the end of the call, I remember Brennan advising his swarms of brokers to think less like eagles and more like geese, basically to think more like a team than as individuals. The money quote that I remember at the end was informing us that no eagle ever laid a golden egg. At that moment part of me wanted to raise my hand and ask if he knew that the goose that laid the golden eggs wasn’t real, but thought better of it.

Now onto Action Park itself – I say without hesitation, that it was my favorite amusement park ever. My buddies & I would drive up there to get to the park the moment it opened so we could jam in a few rides on the best rides, spend the day getting battered on the various water rides before heading home in the evening bruised, scratched and sore from the day but having had a ton of fun. The park’s water rides, especially the raft and inner tubes kept us running from ride to ride all day long. Apparently some rides were were far less safe than others, and the park had its share of serious injuries, even a few deaths. In fact, there were so many injuries that Gene personally maintained two ambulances for taking park goers to the nearby hospital. If this sounds completely insane, well, it kind of is. What I loved about Action Park was that unlike the more popular Great Adventure down the Jersey Turnpike, is that instead of passively riding on roller coasters or other rides, the water park had you personally at the center and controlling all of the action.

The movie captures what I just wrote about the park, and goes into so much more depth behind the scenes, the park’s history, the larger than life Gene Mulvahill, and of course the park’s demise (along with Brennan’s downfall). After watching the film I reached out to a few buddies with who I’d frequented the park and was amazed that we’d only scratched the surface of the jackassery that went on there (such as drunk driving their grand prix race cars). What impressed me the most about the movie was that it would have been easy to portray Gene as a misunderstood genius or heartless b*stard for how he treated the families of those who died in his park, but it did a great job of showing both sides of Gene and neither judging nor excusing him.

A park like Action Park is completely inconceivable today. I’m absolutely not excusing Gene’s neglect nor his disregard for the families, but with a few modifications the park could have been made to work without killing anyone via neglect. But what I truly miss is a park where Americans who are willing to take a few lumps are free to do so. Just as I wrote about The Cannonball Run a few months ago, the main reason Action park could not exist today is that I just don’t see enough young people who could roll with a rough and tumble kind of amusement park these days. Hopefully I’m wrong and that spirit hasn’t been bred and indoctrinated out of the American people. I’ve got a feeling that the pendulum is starting to swing back the other way, but it won’t happen without The Radical Left fighting to drag our country even further into their misery. Here’s hoping that in the end they’ll be proven wrong.