The bag of hammers who is our Vice President 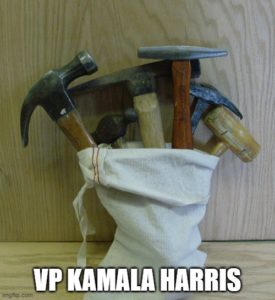 I never thought much of Kamala Harris. She could dance and read cards handed to her but even I am surprised at just how unintelligent she is.

It is widely believed that Harris got to where she is using less than savory means. She used Willie Brown’s bedroom as the launch pad for her political career. She was arm candy for Montel Williams.

Harris’ not being very bright is a more widespread notion than I imagined. See here.

One example from Powerline

Harris comes across to me as mediocre through and through. Her presidential campaign was a disaster. An implosion of that magnitude — one that cannot be attributed to any scandal or single misstep — is almost unprecedented in the history of presidential politics.

Consider, too, the border trip fiasco — not the trip itself, a non-event, but all of the missteps that preceded it, especially her lame and bizarre answers to Lester Holt’s questions.

She is obviously not up to the job of Vice President, let alone President. She was put in charge of the border but she couldn’t find it. Given multiple jobs, she whined about it all being too tough on a girl.

Harris said she’s used to multitasking and is motivated by all the work that she and Biden are trying to get done.

“Yeah, maybe I don’t say ‘no’ enough,” Harris said with a laugh. “But I do believe that these things are achievable. It’s just a lot of hard work, but that’s why we’re here and that’s what people wanted. Right?”

Then she uttered this incomprehensible statement

“We will go into these positions that we will arrive in these positions, and we will work hard and get things done,” she continued. “And that’s what motivates me, truly.”

Yet even that pales in comparison to the idiotic excuses she made against voter ID.

“I don’t think that we should underestimate what that [compromise on voter ID laws] could mean,” Harris said in an interview with BET News. “Because in some people’s mind, that means you’re going to have to Xerox or photocopy your ID to send it in to prove who you are. Well, there are a whole lot of people, especially people who live in rural communities, who don’t – there’s no Kinkos, there’s no OfficeMax near them.”

Kinko’s was gone 13 years ago.

BTW, you would need an ID to buy a phone plan, take out a library book or open a bank account.

“She is obviously not up to the job of Vice President, let alone President.”

Democrat supporters worship a liberal elite that doesn’t even know (or care) if they exist. All my ranching relatives used to be Democrats because the old Democrat party was the party for “the little guy”. Now it’s the party of the socialist left, a party that thrives on divisiveness and chaos. They are the party that taxes the inheritance of those ranches to the point that they have to be sold off. Their elitists don’t know how anyone lives outside of the wealthy coastal neighborhoods and, furthermore, don’t really care. Tractors now have internet and GPS on them; these people can figure out how to get an ID, make copies and actually vote in person.

Kamala thrives on the atmosphere of hate, divisiveness and racism. Recall her despicable demonstration of hateful cluelessness and disregard for the truth in the Kavenaugh hearings. Hell, she called (or pointed out) idiot Biden a racist, drawing the ire of Dr. Jill. But, of course, it was all just a political game, just for the cameras.

Yep, she’s stupid all right. She can play to the liberal cameras but she can’t get a damned thing that is good for anyone but her accomplished. She’s already proved this.

Quit insulting bags of hammers they have at least twice the IQ and common sense as Mattress Back Kamala.

Hammers are quite useful. Harris, not so much.

YOU ARE STATING THAT A POTUS(?) HARRIS IS A BAG OF HAMMERS.. I TOTALLY DISAGREE WITH THAT REMARK IN THAT HAMMERS ARE A USEFUL TOOL OF SOCIETY. WHY ?? WELL WE CAN BUILD THINGS LIKE HOMES, APARTMENTS, DAMS, BRIDGES, BRNS, WARVES, DOCKS, SHIPS, BOATS, REMODLE, THE LIST IS ENDLESS. HELL YOU CAN’T EVEN COMPARE THE IDGIT KAMALA HARRIS TO ROCKS AS THEY ARE ALSO USEFUL IN THE GRAND SCHEME OF LIFE AND DEATH ON OUR WORLD AND UNIVERSE. NOW A VACUM WOULD BE MORE A APPROPRIATE TO DESCRIBE POTUS HARRIS. THANK U FOR YOUR SUPPORT IN THESE TIMES OF HORRENDOUS COVID MULTI VARIANTS PLANDEMIC SWEEPING THEU , WELL EVERYWHERE THERE’S IDIOTS AND FOOLS LOCATED EN MASS. TA TA.

There’s a new villain in town, “the Cackler.”

If there are people out there who are actually dumb enough to believe that Kamala Harris is dumb, I’m sure Donald Trump has already found them.

Says the guy who’s dumb enough to support a man quoting Stalin, and an incompetent woman who can’t answer questions without nervously laughing.

Trump outclasses them both, by far.

Anyone who would follow Rudy Giuliani’s advice to “Just say we won” should be banned from holding public office.

I remember this clown’s election night big bullshit roll-out, declaring victory while already running behind, and before the counts were in from known Democratic strongholds. It’s all on video, if anyone has forgotten:

Anyone who continues to obscure the real issue, voting integrity, by invoking “Rudi Guiliani” should be ridiculed, mercilessly.

Lots of things on video, greg

Clinton saying “she won”
Biden admitting quid pro quo
Biden saying not to close down the country
Biden saying “if you don’t vote for me, you ain’t black”
Biden threatening to use nukes on US citizens
Biden playing off Chinese Concentration Camps as “culture”
Coolers full of ballots simply lied about as “holding camera equipment”
Ballots being pulled out from under the table after poll watchers left
Cops opening doors at the Capitol
On and on.

Quit while your behind.

It’s clear Biden had false and manufactured votes, and won nothing.

Giuliani’s steaming load of horse manure has become the rationalization for republican voter suppression tactics peddled as election integrity measures. It’s actually the ONLY rationalization, since no one has produced a shred of credible evidence that any of his goofy claims are true.

The guy’s license to practice law has been suspended owing to his reprehensible conduct.

After all the lies you have foolishly defended, there is arising only one option: you are a liar that prefers lies to the truth because the truth exposes the failures and corruption of your ideology.

For instance, Democrats pretend to care about people seeking asylum when they come across the border and are potentially Democrat voters, though the vast majority simply are looking for jobs and benefits. But Cubans actually fleeing totalitarian oppression and the real and eminent likelihood of being held political prisoner, tortured or killed, and who also likely vote Republican, are not allowed into the country. THIS is why you and your decadent party have no credibility and have to resort to fraud and lies.

Anyone who continues to obscure the real issue, voting integrity, by invoking “Rudi Guiliani” should be ridiculed, mercilessly.

The proof is real, easy to see, and cannot be wished away by partisan criminals like you, greg.

The election was rigged, and legal American voters know it.

But we won’t let that stand.

Not on my watch.

74,000 mail in votes in Maricopa County that have no record of having a ballot sent. But, never mind. Nothing to see here.

You might check in with recent developments in Georgia and Arizona. No doubt they are not the exceptions. The fraud happened and we know it. Don’t we?

“If there are people out there who are actually dumb enough to believe that Kamala Harris is dumb,”

Oh, come on now, Comrade Greggie, all those city dwellers who live right down the street from a Kinko’s know how smart Kinko Kamala is.

It’s still called Kinko’s by a lot of people, though they know it’s been renamed FedEx Office. You know . . . because they can read the sign over the door?

Only a dummy would make something out of the fact that somebody else knows more the store’s history that they do.

“It’s still called Kinko’s by a lot of people,”

Just ignore the fool, he won’t go away but we can always hope.

We are a;; amazed Boris that Greg gets both cable and internet under his bridge.

He still has a Kinkos down the road, too, apparently.

WHAT is called Kinkos? The NOTHING that is Kinkos? There ARE no Kinkos and they’ve been gone for 13 years. Only a dummy would claim people are being denied their voting rights because they can’t find a business that has been gone for over a decade. Only a racist, lying, corrupt idiot would compare election integrity with the Civil War.

By the way, why are all the terrible historic citations Democrats use to compare election integrity to were committed by Democrats? Slavery? The Civil War? Jim Crow? Opposition to women voting? Opposition to blacks voting? The KKK? All Democrat accomplishments. Not a very good strategy.

greg admits his party rigged the election by arguing about Kinkos.

You might argue she was smart enough to identify idiot Biden as the racist he actually is, but then again every Democrat when they are losing an argument call the opponent a racist. No, she is absolutely stupid and a loser that, when she isn’t using sexual favors to promote herself, is employing election fraud.

If there were enough people out there dumb enough to vote for Biden/Harris, we’d be living in a third-world country already.

Harris/Biden are proof that you can install anyone if you control who counts the votes…as said by Biden himself.

What an idiot. His dementia-laden mind can’t help but admit that he knows the election was rigged.

Of those who agreed with Joe’s rhetoric about voting reform…….“I applaud them standing for the rights of all Americans to express their voice through their vote, unencumbered,” Kamala said. https://spectrumlocalnews.com/nys/central-ny/news/2021/07/13/texas-democrats-washington-kamala-harris-voting-rights

“Unencumbered?” What she means is despite not being citizens, despite finding and filling out absentee ballots sent to previous tenants, despite being felons, too young, lying on the forms.
And that’s not the worst of it.
Unencumbered also includes freedom from audits even if one party’s people are all instructed to leave and CAMERAS catch the other party’s people running ballots thru counting machinery multiple times, etc.

I don’t remember civil rights activists flying to the Edmund Pettus Bridge on private jets and riding on luxury buses, carrying cases of beer with them in case they begin to understand what farcical idiots they are and need to be drunk.