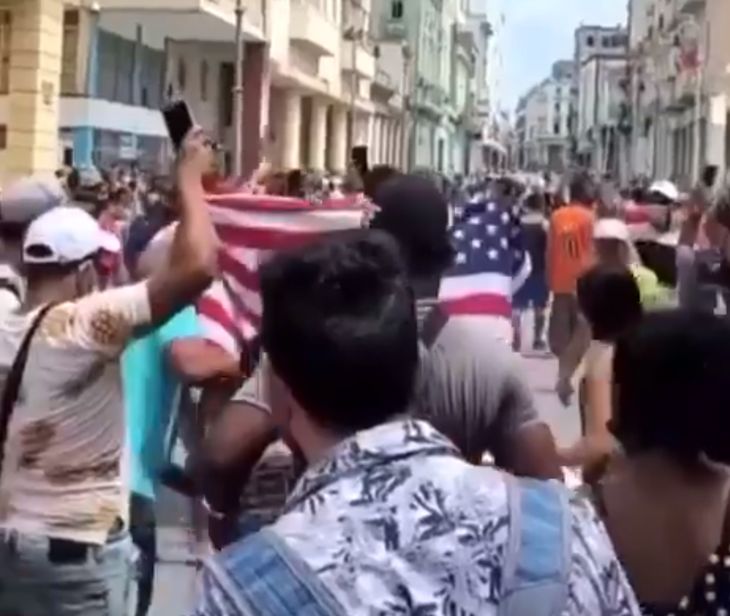 Cubans want to be free.

They have taken to the streets in protest. As you read accounts of the protests, note how quickly the corporate media is interject what it wants you to think- that this is Trump’s fault and it is due to COVID 19.

Chants of “We want freedom” and “We are not afraid” rung throughout Cuba Sunday as the country erupted in protest over economic anxiety and healthcare shortcomings around Covid-19, including a recent spike in cases and the government’s failure to vaccinate citizens. The protests began just outside of Havana Sunday afternoon, and quickly spread across the country—eventually reaching Miami. NBC News reported that in several Cuban provinces “the government, which controls the only internet provider company on the island, has caused service outages to prevent live broadcasts” of the protests.

Without making any acknowledgment of the deep discontent with his government shown by protesters chanting “down with the dictatorship” across the island on Sunday, Cuban leader Miguel Díaz-Canel said Monday the massive uprisings were the “cumulative” result of U.S. policies.

Everyone in the corporate media points a finger at Trump and the US. Everyone, that is, except for the Cubans.

Members of the Assembly for Cuban Resistance, a coalition of organizations against communism in Cuba that advocates for human rights, said in a press conference Monday that they are supporting the young people on the island as they take to the streets and want the U.S. to intervene militarily.

In all the protest videos from Cuba they shout for liberty, freedom and an end to the communist regime. They don’t say a word about COVID despite the lies coming out of Biden’s administration. pic.twitter.com/uTB6n7Ao3q

And there it is. They want Communism out. They want to be free. Here at home, democrats are pushing Communism (they’re cloaking it as socialism) and they want to crush our freedoms. The is even more stark contrast:

Protesters in America: Burn the US Flag, a symbol of freedom, liberty, & justice—ideals that EVERY American possesses but so often ignore.

Protestors in Cuba: Fly the American Flag & are willing to die for the freedom, liberty, & justice that’s synonymous with the USA.

Cubans fly the American flag as an inspiration for freedom. Pathetic left wing Americans burn that same flag. They teach their children to throw someone else’s flag on the ground.

This yearning for freedom by Cubans is met with silence from America’s leading Socialist/Communists.

Notable far-left figures that did not weigh in on the matter by the time this report was filed included Sen. Bernie Sanders (I-VT) and Rep. Alexandria Ocasio-Cortez (D-NY), who was described in 2016 by Tom Perez,  then-Chairman of the Democrat Party, as the “future” of the Democrat Party.

Cubans are looking to the US for help but the Biden regime is not likely to do anything that might upset Russia, China, AOC and the Squad or Bernie Sanders. Cuba wants to become America and our leftists want America to become Cuba. The contrast is stark.