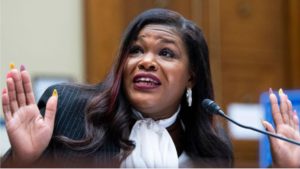 Cori Bush (D-MO) went on a rant yesterday. She complained strenuously about the United States of America.

When they say that the 4th of July is about American freedom, remember this: the freedom they’re referring to is for white people.

Cori Bush has a net worth somewhere between $400,000 and $2 million. She has been an RN, a pastor and a faith healer. She allegedly was healed of COVID by a “Nigerian-born religious and leadership guru” during a 30 minute phone call. She was elected to Congress in 2020 and then aligned herself with the “Squad.”  She makes $174,000 per year. That sounds a lot like freedom to me.

She says America is a “racist AF.”

She got a considerable amount of pushback.

This incendiary and false rhetoric does not help anyone or anything. It will do nothing to improve race relations but will only harden people further. But then, what is the problem? She seems oblivious to reality.  She has money, privilege, a place in Congress, and can make ridiculous and racist remarks without consequence.

Cori Bush is more free than am I. I don’t even know a faith healer.

“Cori Bush has a net worth somewhere between $400,000 and $2 million. She has been an RN, a pastor and a faith healer. She allegedly was healed of COVID by a “Nigerian-born religious and leadership guru” during a 30 minute phone call.” Now THERE’S a rational, reasonable, level-headed representative for you. Nothing screwy about her, huh? No wonder Democrats line up behind her in support.

“She says America is a “racist AF.”” Strange language for a “pastor”.

We went to a friend’s place out in the country for a July 4th celebration. Good old Texas rednecks, drinking, eating and setting of lots of fireworks. Over in the playhouse for his grandkids played a white kid, an Hispanic kid and a black kid. They could not care less about race or divisiveness. They played together blissfully unaware that, soon, they will possibly go to a school that will teach them to be racist and hate either other races or their own. That’s the Democrat’s contribution to society.

she is free to leave

There is evidently no limit to the stupidity and self-debasement that people will go to, to please Soros/Obama.

This will guarantee them continued funding by the Marxists and keep most Congressional Republicans away for fear of being called “racists”.

fat ugly stupid street trash. if she hates America that much, leave. in any other country in the world, this type of political bashing would not be tolerated. Like comrade greggy poo, I can arrange one way passage to cuba, russia, iran or venezuela. does she have a bsrn degree? big mouth, empty brain, no different than the rioters on the street. faith-healers are frauds. did she have a positive test???

I can’t figure out whats keeping her here, must be the abundance of food.

Politicizing patriotism is going to backfire spectacularly on Dems like Cori Bush.

But then, “Ferguson-made activist” is in the first line of Cori Bush’s biography on her own campaign website.

So, her entire success has been based on voters believing the lie that Michael Brown had his “hand’s up,” instead of his charging a police officer after trying to take the gun from that officer.

Building on sand is notoriously stupid.
All her lies after pushing this “Hand’s up, don’t shoot,” lie will eventually be exposed.
Her income is more than 4 times that of those who voted for her.

The entire premise of the Democrat party and agenda today is based totally on lies. Bush fits right in nicely.

Why does she continue to live in this evil country?

Because they can’t get this rich selling racism anywhere else.

The next time we get a duly elected President, he/she should start a program whereby the government will pay these Marxist America haters $50,000 to leave the country and then pay for the plane ticket to their country of choice with the stipulation that they renounce their citizenship and never return. Most will probably decline because they are just a bunch of whiny ass crybabies with no sense of honor. They are the shallowest of all people and a burden on society.

Anther member of the Stupid Jackass Party(Liberal Democrat)saying something real,y stupid like what this Dim-Wit just said

I basically make about $8,000-$12,000 a month online. It’s enough to comfortably replace my old jobs income, especially considering I only work about 10-13 hours a week from home. I was amazed how easy it was after I tried it copy below web….
http://bucks2.com/