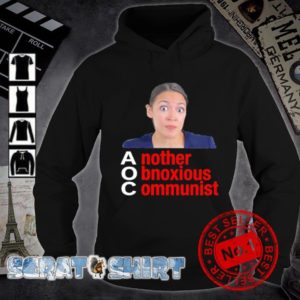 Our goal was the universal triumph of the Communism, and for the sake of that goal everything was permissible – to lie, to steal, to destroy hundreds of thousands and even millions of people… everyone who stood in the way”.
–Lev Kopelev

AOC is rapidly approaching her transformation into full blooded Communist. She is normally dismissed for her intellectual deficits but now she is engaging in outright deceit and mendacity. She is becoming a wholesale propagandista. This is often described as “gaslighting.”

She did just that yesterday.

Murder and crime is skyrocketing in large cities across the nation. Her take on this?

During a conversation with Rep. Jamaal Bowman, D-N.Y., over Zoom, Ocasio-Cortez seemingly cast doubt over the data showing crime rates rising in cities throughout the U.S., especially in New York, where shooting incidents and murders have risen 53% and 13% since the beginning of the year.

“We are seeing these headlines about percentage increases,” Ocasio-Cortez said. “Now, I want to say that any amount of harm is unacceptable and too much, but I also want to make sure that this hysteria, you know, that this doesn’t drive a hysteria and that we look at these numbers in context so that we can make responsible decisions about what to allocate in that context.”

Got that? All those deaths? They’re just hysteria. They’re not real. They’re not important. Those victims aren’t really dead, they’re just out of context. By the way, that would be the same Jamaal Bowman who called for increased police presence at his house while he was out demanding police be defunded.

Let’s have a look at what Sandy Cortez calls “hysteria.” 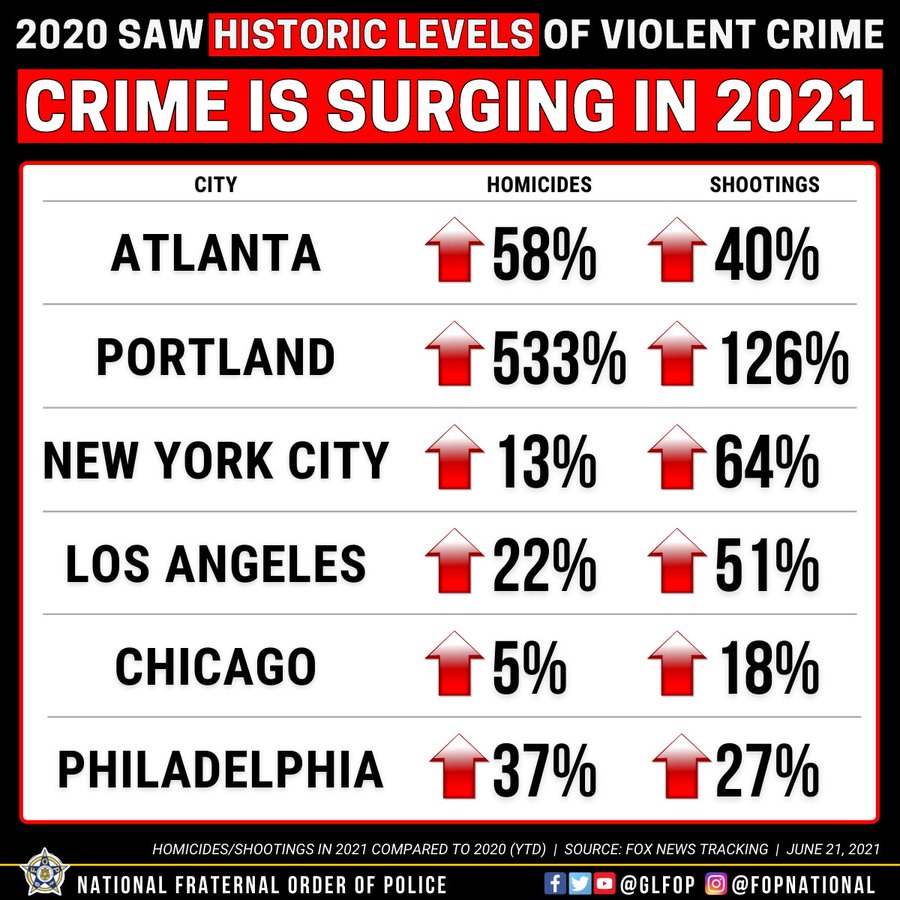 The US saw significant crime rise across major cities in 2020. And it’s not letting up

Major American cities saw a 33% increase in homicides last year as a pandemic swept across the country, millions of people joined protests against racial injustice and police brutality, and the economy collapsed under the weight of the pandemic — a crime surge that has continued into the first quarter of this year.

Sixty-three of the 66 largest police jurisdictions saw increases in at least one category of violent crimes in 2020, which include homicide, rape, robbery, and aggravated assault, according to a report produced by the Major Cities Chiefs Association. Baltimore City, Baltimore County and Raleigh, North Carolina, did not report increases in any of the violent crime categories.

This is a consistent finding across the country, especially in democrat run cities.

Biden’s America: 41% increase in cops killed so far this year

Homicides Have Skyrocketed in These Six Democratic Cities; Black People Are Disproportionately the Victims, Data Shows

Black people have represented a massive share of murder victims in six major cities through the first six months of 2021 compared to last year, which itself saw a large crime surge, according to data analyzed by the Daily Caller News Foundation. The DCNF analyzed both police department data and homicide reports compiled by local news outlets to determine how black people have been victimized in the wake of the 2020 crime spike.

This is what Sandy Cortez calls “hysteria.” None of that hysteria will stand in the way of her Boshevik reforms. Meanwhile in Cortez’ back yard:

Biden tried to morph Republicans not supporting his $2Trillion “infrastructure” bill into supporting defunding police.
I know police get a little $$$ from the federal gov’t, mostly in the form of old, used military vehicles and weapons the gov’t would rather not throw away, but really, Joe????

AOC looks at these numbers and sees areas, like Chicago, Baltimore, NYC and L.A., where numbers were already outrageously high, so new crimes are not rising in % as fast as elsewhere.

And she sees a need for more social workers instead of police.
Meanwhile almost all the top defunders have quietly siphoned off gov’t cash to cover their own PRIVATE security.
Others among them get called out for hypocritically calling police when they are scared, just not wanting YOU and ME to have police when we need them!

U-Haul has to pay people to deliver some of their vans into some of these crime-infested cesspits.
People are moving out, not in.

minneapolis city council has been doing this since the alleged, bogus pandemic clicked into high gear-siphoning federal funds for personal security. the dolist oac possess a creatinour cranial content. a nice weeks trip to the Black Dauphin prison in Russia would be nice..have contacts that can set it up for her.

It looks like a turf war is breaking out in NYC. With reduced police presence and restrictions on what they can actually do in response to crimes, gangs are staking out their turf and opening fighting, with guns, in the open, in daylight. Prosecutors will not prosecute criminals.

Oh, but let’s keep looking into Trump’s businesses for the past 40 years. THAT’S important because only Democrats get to use all the resources of government to pursue their petty personal vendettas.

NO Democrats need to have political power.

Once again the Democrats refuse to face reality

You know, if police officers would stop killing people, these numbers wouldn’t be at all remarkable. We’d be back to the rates in the 2016-2020 period. Uh yeah! As I keep saying more and bigger prisons and longer sentences. In addition, make it against the law with very stiff penalties, to film anyone without their consent.
Better yet make anyone who films anyone pay royalties to the person filmed. Like Hollywood the person being filmed should be allowed to set the rates of the royalties.

Every idiot now has a gun. You expected the murder rate would go down?

When did it go up? Well, when Democrats began promoting political violence, defunding police and refusing to prosecute crimes (both their BLM/ANTIFA political violence and violent crimes). Lots of people had guns before that. It’s not guns, it’s Democrats.

A Minneapolis judge ordered the “defund the police” crowd to hire many more police, specifically, that Minneapolis should have at least 730 officers or .0017 of the 2020 census population, whichever is higher, by the end of June 2022.

Damn, it takes a judge to tell these stupid idiots this? What’s more, they need to take the money they cut from the police budget and replenish the personnel with that. No federal bailout for the money they skimmed out of the police budget. Idiot Biden seems to be willing to let them profit from their stupidity and use those desperately needed “infrastructure” money to cover their stupid asses.

Guns are not responsible for the spike in murders.

“Every idiot now has a gun”

Not true, I know lots of lefties who still don’t have guns.

What I do know is that anyone capable of using Google can easily find that the increasing murder rate didn’t coincide with the increase in gun ownership under Obama (or Trump), it increased in conjunction with defunding the police and reducing/eliminating prosecution for crimes.

Not that facts and actual statistical correlation can sway a lefty from their pet delusions, but…

The national murder rate increased by 30 percent in 2020. Trump was President, not Biden. Why does the list show the increase only in Democratic-controlled cities? The surge wasn’t only there. And why is it showing percentages of increase, rather than the total numbers?

This is propaganda. It’s deliberately deceptive bullshit. For example, the percentage increase in Portland for 2020 was indeed up 533 percent, but THE TOTAL NUMBER OF HOMICIDES IN PORTLAND FOR ALL OF 2020 WAS ONLY 55.

Turn on your brain!

Here’s some of the results of your party’s rule.

Target says it's closing all six of its San Francisco stores early because of crime specifically thefts and shoplifting. https://t.co/Fmh9ffgrrg pic.twitter.com/sZgjlZGK2H

Yeah, Trump was President* and it was the visceral, infantile, crybaby, sore loser response of the left that incited the violence. Democrats promoted it, protected it and excused it.

Note there were NO rampages, riots, looting, burning or assaulting committed by “white supremacists”. The violence is from the left and you, Nadler, idiot Biden, Pelosi and the media can deny it all you want, but that is the fact.

So, 55 souls in Portland that are not politically important, so they aren’t important. Yeah, that’s left wing humanity. Portland is a war zone, ongoing and daily riots committed by BLM/ANTIFA.ed

*back when Presidents were lawfully, duly, legitimately elect

55 total homicides over the course of a year in a city with a population of nearly 665 thousand is a low homicide rate. To focus on the fact that this represents a 533% increase over the preceding year is deliberately deceptive. It’s the stuff of typical b.s. of right-wing propaganda, which relies on an assumption that its target audience seldom bothers to engage in critical analysis. Those who do should properly consider it an insult to their intelligence.

But that’s about 50 that wouldn’t have died had Portland’s Democrat government cared about the taxpaying citizens. If they cared about peaceful residents as much or more than rioting, looting, assaulting left wing thugs, they wouldn’t have been killed.

It’s not deceptive at all; percentages is how measurements and comparisons are made. Deceptive is calling the January 6th riot an “armed insurrection” when there were no arms but what the federal authorities had. Deceptive is saying Officer Sicknick was murdered at the riot when he died a day later of a stroke. Deceptive is imprisoning so-called “insurrectionists” in solitary confinement without bail on a charge of “trespassing”. Deceptive is ignoring BLM/ANTIFA violence, happening every day, and claiming “white supremacists”, who commit NO violence to speak of, is a national existential threat.

In other words, you EMBRACE deception. Your party and ideology is the source of the racism, divisiveness and violence.