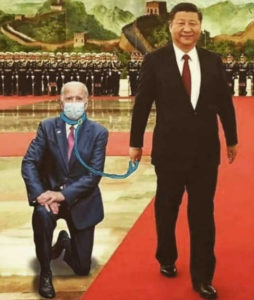 China could not have plotted a better scenario.

Not long after he was inaugurated Joe Biden called Xi Jinping. The call was described as “rosy.”

China on Friday offered an optimistic – almost rosy – assessment of a call this week between President Xi Jinping and President Joe Biden as the new American leader works to determine how aggressive an approach to take with his country’s principal rival.

…”This was widely interpreted as a gesture that Biden showed respect for President Xi and China,” according to an editorial by the English-language Global Times. “It seems that he was using such goodwill to balance the tough messages the new U.S. administration sent in recent days and various interpretations on those messages.”

Respect? It’s a lot more than that. It’s payback.

China has long wanted Biden to be President. When Biden announced his candidacy for President, China broke off trade negotiations with Trump a week later.

Six months ago, the Chinese walked away from the trade negotiations.

The move caught nearly everyone by surprise.

After all, the talks had been going on, with increasing intensity, almost since President Trump took office. And they had made significant progress by early 2019.

By March the draft trade agreement had reached an impressive 150 single-spaced pages. In it, the Communist regime promised to abandon many of its predatory practices, from currency manipulation and the theft of intellectual property to the forced transfer of technology and its secret subsidies to its hi-tech companies.

Beijing even appeared ready to back these promised structural changes by agreeing to actual enforcement provisions similar to those imposed on North Korea. The draft called for heavy penalties to be imposed on Chinese companies, or levied on China itself, if the agreement was violated.

China played the wait out the election game and they got the stuffed animal on the top shelf- Joe Biden. They could then pick up where they let off, owning the Biden’s:

Now that investment is paying off. Bigly.

A couple of weeks ago Joe Biden informed Americans of his and China’s plans- that China would seek to own America by 2035. His response was that he racked up a lot of frequent flier miles:

“I’ve spent more time with President Xi [Jinping] of China than any world leader has,” Biden said while addressing Joint Base Langley-Eustis in Hampton, Virginia, for Memorial Day remarks. “For 24 hours of private meetings, with just an interpreter, 17,000 miles traveling in China and here.”

Spending more time taking it up the wazoo from China while making the family wealthy doesn’t count for anything. Then he went on to say that China can’t win because America was founded on an “idea.”


“Every other nation you can define by their ethnicity, their geography, their religion. Except America, America is born out of an idea,” he said.

China knows they have Biden in the bag.

Ben Weingarten provides additional analysis, writing, “[Joe] Biden helped make Communist China strong — again, while his family directly profited from it when he was in office — cultivating a relationship with Xi Jinping. The Obama-Biden administration was remarkably soft on China over its most grievous provocations, whether in terms of the catastrophic Office of Personnel Management hack, the militarization of the South China Sea, or its flouting of U.S. capital market regulations with impunity, gaining the imprimatur of the administration after lobbying Biden to ink a memorandum of understanding effectively normalizing its cheating.”

Biden is not the only Chinese property in this country. China controls much of the US:

Practically everything in America is for sale these days, including its valuable farmland, which the Chinese are buying up at an alarming rate, even though it is not widely reported in the left-leaning U.S. press. And that is because much of the media, like the Bidens, is also beholden to China.

CNN is owned by Warner Media, which has ties to the People’s Republic of China with a $50 million investment in Chinese Media, a so-called “private” Chinese company.

NBC and MSNB are owned by NBC Universal which has a partnership with Xinhua, China’s state-run media. ABC, with Chinese government support, has invested billions in building Disney World in Shanghai.

Jeff Bezos, the CEO of Amazon and the owner of the Washington Post, buys many of his biggest-selling products from China where they are made by low-wage workers. It also runs “China Watch,” a paid supplement written by Chinese propagandists.

Major League Baseball, like the National Basketball Association, is so concerned about voting rights, police brutality and alleged systematic racism in the U.S., but has no qualms about doing business with China, where dissidents are brutalized, jailed and made to disappear.

Also, there is hardly a college in the country, starting with Harvard, that does not take money from China.

With Biden’s acquiescence, China has big plans and that means Taiwan.

China consumes more than half of them and wants more as its economy grows and is increasingly casting an eye to their island neighbor to the east to get them – some worry by military force one day.

“Whoever controls the design and production of these microchips, they’ll set the course for the 21st century,” said Martijn Rasser, a senior fellow at the Washington-based think tank Center for a New American Security.

“By gaining control over Taiwan’s semiconductor industry, China would control the global market,” Rasser said. “They would have access to the most advanced manufacturing capabilities and that is even more valuable than controlling the world’s oil.”

I’d like you to listen to Nikki Haley. She’s over the target here:

Nikki Haley: Why China Keeps Me Up At Night – YouTube

China could bring much of the world to its knees by taking Taiwan. Joe Biden will not resist it. He’s too deep into the CCP. Watch Taiwan carefully. Much of your future hangs on it.

Speaking of defeat, Biden has practically no budget increase for either Homeland Security or Defense. Meanwhile Biden is blathering on about white supremacists being the greatest threat to America.

Then again, America handed itself to China on a platter. Buy Biden and you buy America.

I cannot think of a more anti-American President ever.