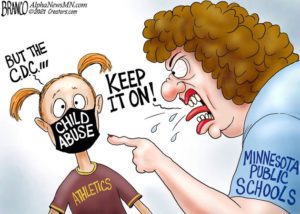 Welcome back to Day 136 of The Harris* Occupation! Still keeping light on the content, so let’s get to it:

5/31 – As “Journalists” Cry That Their Monument To Their Own Vanity — the Newseum — Shuts Down, Commenters Patiently Explain Why Their Temple Must Be Destroyed

OK, this one needs comment. To translate the headline, “Portland Police will investigate the victims of Antifa and the Buy Large Mansions (BLM) violence”

6/3 – I’m A Mom Seeking Records Of Critical Race and Gender Curriculum, Now The School Committee May Sue To Stop Me (Update)

6/4 – ‘Woke’ medicine is coming to a hospital near you

As far as I can tell the only people all jazzed up about eating bugs are journalists, so you could’ve probably handled this with an internal emailhttps://t.co/bqWu3ehaKi

2016 TRUMP
2017 IS
2018 LITERALLY
2019 HITLER,
2020 NAZIS
2021 Actually, comparisons to the rise of Hitler and the Holocaust are shocking and outrageous and the entire Republican Party must apologize

Of course, I was involved in an extensive and ongoing Facebook local group “discussion” (either you thought the cover was beautiful and woke or you are a racist). No one is interested or cares about the background of BLM, they are happy to endorse the racism, Marxism and violence inherent in the movement. Oh, and forget about pointing out the corruption of Cullors using donations to expand her personal real estate portfolio; Facebook bans any articles covering what the leftist media will not. Ignorance is being indoctrinated into our children.

Black lives matter but, apparently, Jew’s lives don’t. I’m not sure, but I think that is racist.

That’s science, folks! Don’t forget to put your mask on!

Democrats hate the military, hate veterans and, no doubt, disregard those who died to keep us free from their ideology. No surprise the whore Kamala has no idea what Memorial Day represents.

Stand by; it’ll get worse. Maybe he will sign an executive order that if you think she looks “legal age”, she’s legal.

“5/31 – As “Journalists” Cry That Their Monument To Their Own Vanity — the Newseum — Shuts Down, Commenters Patiently Explain Why Their Temple Must Be Destroyed”

Nobody thinks today’s “journalists” are important but today’s journalists, and their ignorant bias is well known.

I think having Abrams around is more like having something else on the bottom of your shoe. Has she even paid her taxes yet? Hey…. doesn’t denying the outcome of elections threaten the very life and existence of democracy? Hopefully, MLB will lose millions more.

Well, with their masks on, how can you tell they aren’t white supremacists, Proud Boys and Qanonners?? After all, the idiot Biden says THEY are the real threat, maybe because they cleverly remain invisible and inactive. I mean, really…

“6/3 – I’m A Mom Seeking Records Of Critical Race and Gender Curriculum, Now The School Committee May Sue To Stop Me (Update)”

I wonder how much money spent on lawyers to prevent people from doing reasonable things and reasonable people trying to circumvent leftist suppression and what better uses for that money there are? If the left is so proud of their agenda, why do they constantly try to keep it hidden?

“Of course, I was involved in an extensive and ongoing Facebook local group “discussion” (either you thought the cover was beautiful and woke or you are a racist). ”

Been having a similar fight up here in Arlington, VA over getting the schools reopened. The Board of Ed swears that they’ll follow Governor Coonman’s mandate to completely reopen in the fall, but their behavior in the last year tells me that they’re already working on how they’re going to move the goalposts and screw our kids out of another year of their lives.
I’ve got a nagging feeling that by the end of 2021 my 22 year residence in the DC area will be coming to an end