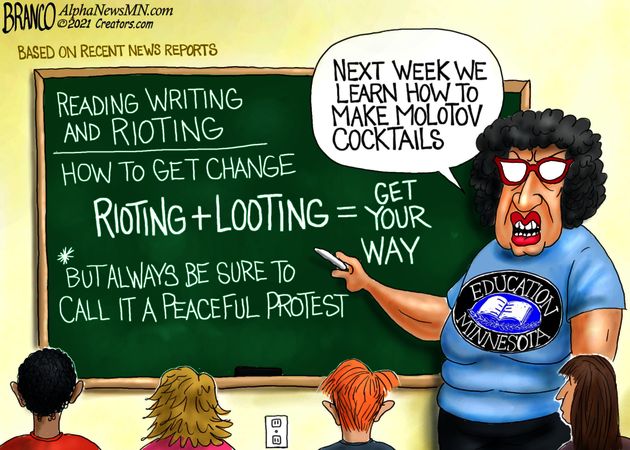 Another light week of posting to mark Day 129 of the Harris* Occupation to take us into the holiday weekend:

5/21 – RON DESANTIS on CRT: “It’s offensive to the taxpayer…to fund teaching kids to hate their country and hate each other.”

5/23 – FROM WHAT? Union Boss Mocked After Claiming Teachers Are Exhausted

5/26 – CNN’s Cuomo: ‘Remember the Fact’ Trump, Supporters ‘Were Wrong Before They Were Right’ on COVID Origin

Have a great weekend and Happy Memorial Day!

In Biden’s America, leftist mobs are smashing synagogues and targeting Jews in restaurants. Good thing we got rid of the Nazi.

The shame is that USAToday had the gall to keep quotation marks around her essay as if she wrote it when actually they rewrote it all over the place!
Every time she wrote “male” they changed her words to something else, yet pretended that it was as she wrote it!

Every company should investigate all their employees for opposition to “Critical Race Theory”… to make sure they are. Love how the “complaint” is that Midkiff harassed them by… posting things they could have simply ignored. By the way, Midkiff is undoubtedly a member of the pilot’s union, so good luck getting him fired.

Can’t they pass a law forcing stores to remain open even though they are being stolen blind? No doubt it’s not a concept Democrats understand.

“5/21 – RON DESANTIS on CRT: “It’s offensive to the taxpayer…to fund teaching kids to hate their country and hate each other.””

It’s offensive to all non-racists, though racists and those who exploit racism find it really handy.

I guess since I quit watching the NFL, they have been overrun with Koreans.

“5/23 – FROM WHAT? Union Boss Mocked After Claiming Teachers Are Exhausted”

Perhaps their delusion is a result of sexual frustration since they can’t screw their students in virtual classes.

“5/26 – CNN’s Cuomo: ‘Remember the Fact’ Trump, Supporters ‘Were Wrong Before They Were Right’ on COVID Origin”

Which means, of course, that the liberals who denounced the (correct) accusations that the Wuhan virus came from the Wuhan lab were wrong and, notably, REMAIN wrong. Like the idiot Joy Behar who says Trump just made a lucky guess (in stating that the virus from Wuhan came from the CCP viral lab in that very city), meaning that SHE guessed WRONG and remains WRONG (and ignorant). Liberals are all so consistently wrong.

As it should be for everyone that lies about police randomly and wantonly killing blacks and supporting defunding the police.

The left cannot make the argument in support of biological males competing against girls in sports honestly. In fact, all their arguments have to be based on lies.

How could you have missed the ultimate leftist insanity of worshipping and memorializing a dead career criminal that, when confronted with police, ate his entire inventory of drugs he was going to sell and killed himself, ruining the life of some cops in the process? Inviting the nuevo-millionaire family of this scum to the White House? Perhaps idiot Biden was trying to get Hunter on their payroll.

I was going to suggest this to you, but it’s probably too local and insignificant. It did create a sort of local firestorm, mostly due to not having any understanding of what BLM stands for, does or says. Most prefer, cowardly, to simply take BLM at face value, even though racism is implied in the Marxist organization’s very name.

“How could you have missed the ultimate leftist insanity ”
Everyone else has hit on that crazy story; I try to hit angles that may get missed. Your yearbook story is a good example & I’ll probably use it next week