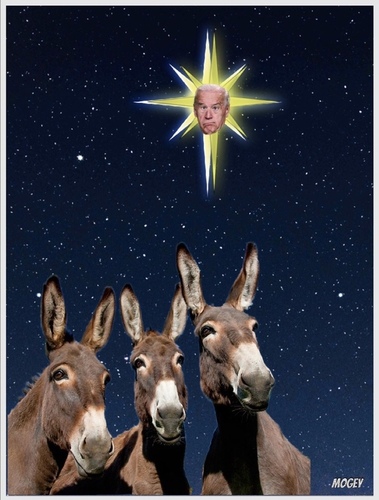 Joe Biden seems royally dazed and confused these days and his condition is only getting worse. That is apparent to anyone who listens to him flub up reading from his teleprompter in the Rose Garden. His crack aides set the device to scroll at minimum speed with letter fonts readable from space. Joe still screws it up. Jen Psaki recently called him “our North Star” which is amusing because in biblical times the North Star led the three wise men to Jerusalem to worship the baby Jesus. Hmmm. Yeah, I don’t think that Joe is leading anyone to see the baby Jesus much less planning to deliver gifts. Joe can’t even receive communion in the Catholic Church without a rumble between Bishops and the Vatican breaking out.

Recently Joe pulled all 120 American troops out of Israel because Hamas rockets, were raining death down on Jesus’s beloved country. That ain’t cool Joe. Nothing says “we got your back Israel,” like yelling “run away, run away,” and jumping on a big plane headed to Germany far away from the rockets red glare. Joe reacted like a scared rabbit. Trump would have flown Air Force One directly through the contrails of incoming rockets and landed at Ben Gurion Airport. Trump would then have dined with the Prime Minister of Israel, Mr. Netanyahu and before the salads were served inquired, “Benjamin, what can we do to help Israel?”

Biden has also renewed a dormant relationship with Iran. Iran hates Israel and wants to wipe her off of the planet. Ringing any bells there Joe? According to Robert Gates, the former Secretary of Defense, “I think he (Biden) has been wrong on nearly every major foreign policy and national security issues over the past four decades.” Ouch. That is definitely gonna leave a mark.

The North Star reference definitely does not remind me of Biden-any way, shape or form. So, who is the wizard behind the curtain? Someone had to write those Executive Orders that Biden signed without reading. We can guess. It has to be someone who has a white hot hatred for Trump and every single one of his zealous supporters. Someone whom Trump humiliated, publically shamed and ridiculed as “clueless and the most ignorant president in our history.” Someone who believed all the hype and adulation heaped upon him as an insignificant politician from Illinois who really never accomplished anything of merit on his own. Someone who believes that he is unique and should receive excessive admiration. Someone who envies Trump’s amazing accomplishments, lacks empathy for those languishing in poverty and is totally arrogant. Riddle me this Batman-who fits that description?

Mike Ditka, the legendary coach of the Chicago Bears knows the answer. Mike believed that if he had run for the U.S. Senate from Illinois in 2004, that he would have beaten Obama and ended his political career. “Biggest mistake I’ve ever made,” Ditka said during a public appearance in North Dakota. “Not that I would have won, but I probably would have, and he wouldn’t be in the White House.” Can you imagine Mike Ditka in the Senate dealing with AOC and her merry band of nitwits?

Alexander the Great once said, “An army of sheep led by a lion is better than an army of lions led by a sheep.” Forget the sheep, lets wake up the sleeping lions in America!