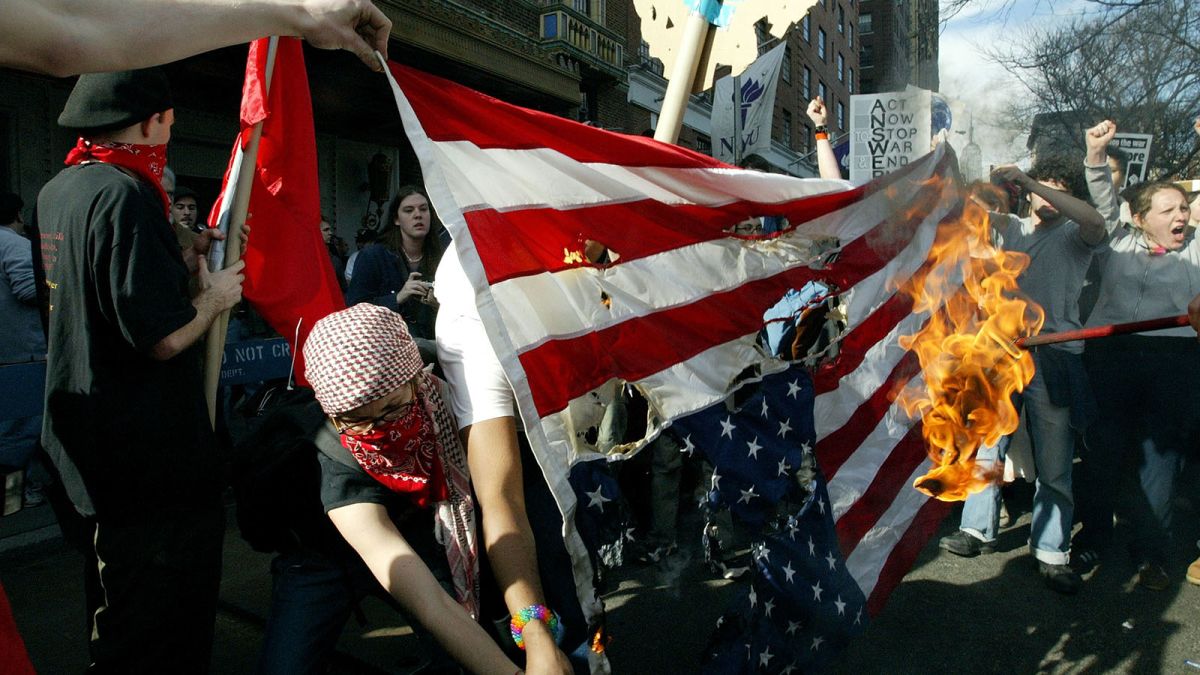 No, it’s not America per se that they hate, but rather the things that made America so spectacular in the first place. Free enterprise. Limited government. Federalism. Separation of Powers. Individual freedom.

But, while they don’t hate America, it is, according to them, racist, sexist, homophobic, ethnocentric, intolerant, and more. In addition, the Constitution is an outdated document that old racist White guys wrote, and it needs to be reimagined.

So, okay, sure, I’ll buy that leftists don’t technically hate America. Indeed, consider that, even when they have Hollywood or Silicon Valley or Wall Street type money and could live anywhere in the world…big surprise, they never actually leave!

When I tell leftists that America is the greatest nation that’s ever existed, it seems to send them over some sort of cliff. They often get angry and look at me as if I just told them the earth is flat. But the funny thing is that when I ask what nation is better or empire was better…crickets. They immediately launch into a polemic about how America is racist, sexist, homophobic, ethnocentric, etc. It’s ripe with inequality, inequity and rich White men run it. And not to be forgotten, its Constitution is an outdated document that old White racist guys wrote and, as such, shouldn’t control our lives today.

Then I suggest that even if it were the case that America was the hellscape they suggest, where should we go to escape it? Again, crickets.

Even though leftist snowflakes can’t point to a single place on earth or in history that is, or was, superior to the United States, or that had or has a more successful combination of prosperity and freedom than the US, they most certainly have an endless supply of ways to improve it:

And the list goes on, and on, and on. It literally never stops. Griswold v. Connecticut begat Roe vs. Wade which begat partial-birth abortion. Gay rights turned into civil unions turned into gay marriage. Jimmy Carter’s Community Reinvestment Act turned into coerced lax lending standards which turned into the housing crash. And the Americans with Disabilities Act started out as compassion for the handicapped and mutated into a vehicle for extortion of small businesses by a cabal of pernicious lawyers. Removing the Confederate Battle Flag from state flags led to pulling down statues of Abraham Lincoln and Fredrick Douglas to canceling Dr. Seuss and Aunt Jemima.

At what point, exactly, will America cease to be the racist sexist hellhole that the left tells us it is? Must the military perfectly reflect the hue and sex of America itself? Must corporate executives be promoted based on their socioeconomic heritage?

What else needs to be reflective of the demographics of the American populace? How about the NBA and the NFL? Black men make up 74% of the NBA and 70% of the NFL. Do we fire 90% of them to hire more White men and women of every race? Would that make the games more competitive, more exciting? Probably not.

Or how about nurses? 93% of nurses are women. Should 40% of them be fired to hire men to make the industry reflective of the rest of the country? Would that make healthcare better or patients happier and safer? Unlikely.

This could go on endlessly for every area of the economy: Ditch diggers. Sanitation workers. Teachers. Barbers. Rap artists. Surgeons. Lawyers.

The bottom line is the left knows how to do one thing well, and that is to destroy what someone else built. We’ve seen that play out across America time and again. From the burnt husks of Detroit and Washington that rotted for decades following the riots of the 1960s to turning once-great American cities like San Francisco and Los Angeles into giant homeless camps strewn with needles and feces to the economic devastation wrought in cities like Minneapolis and Portland and Seattle from a year of “mostly peaceful protests.”

When the left comes to power in successful cities, the march to a real hellscape begins. And it’s not just cities. The left broke the Boy Scouts, they destroyed the NFL as a truly national form of entertainment, they’ve ruined Disney and Marvel, and they are in the process of destroying women’s sports.

The left can do nothing more than take advantage of the freedom and prosperity that others have created and throw stones at it for its imperfections. Voltaire was prescient when he observed, “Perfect is the enemy of the good.”

America is no doubt imperfect. It is flawed and sometimes unfair and often inequitable… but mankind is all imperfect. All of God’s creations are. The reality is, the United States is by far the greatest nation God has seen fit to grace man with and, while it will continue to be imperfect until the end of days, it is nothing like the racist, fascist hellscape the left makes it out to be.

But of course, none of that matters because, for the left, building something great is never a necessity; in fact, it’s never even a consideration. Why bother trying to build anything when it’s so much easier to throw stones at those who are too busy actually building things to notice they’re being targeted for their imperfections by those who don’t have the courage to try.

I’m not sure what the textbook definition of “hate for ones country” might be but everything the left does and says most certainly looks like it — which makes one think of the old saying: “If it looks like a duck, sounds like a duck and acts like a duck, it’s probably a duck.”