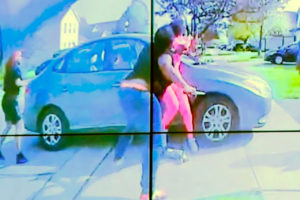 There is war ongoing. The war is being carried out on cops, with a certain class of cops in particular.

On Tuesday Ma’Khia Bryant, a 16 year old girl was fatally shot by a cop as she was attempting to stab another girl. The video can be seen here. No one was interested in the facts. No one.

Certainly not the media and not activists. This from attorney Ben Crump:

Unarmed? Uh, no. It gets worse.

The White House again put its finger on the scales of Justice. Wacki Jen Psaki:

“She was a child. We’re thinking of her friends and family in the communities that are hurting and grieving her loss. We know that police violence disproportionately impacts black and Latino people in communities and that black women and girls, like black men and boys, experience higher rates of police violence.”

Never mind that the cop saved another young black woman.  Those present at the shooting were undetered by that fact:

“This is the racist ass b—h that shot this poor f–king girl,” a bystander is heard shouting, according to the 13-second clip. “He f–king shot this girl, talking about how she tried to stab him, the f–k. That’s somebody’s f–king daughter b—h.”

“She had a knife,” Reardon is heard saying. “She just went at her.”

Protests are already springing up and riots are likely.

LeBron James, the world’s most oppressed man, identified the cop who shot Bryant and tweeted out an incitement to violence against the officer. The mayor of Chicago wants police to ask permission before engaging in a foot chase. Attorney General Merrick Garland promised to give the Minneapolis Police Department an enema. Nancy Pelosi supports Maxine Waters’ call for violence against the police.

Teenagers have been having fights including fights involving knives for eons. We do not need police to address these situations by showing up to the scene & using a weapon against one of the teenagers. Y’all need help. I mean that sincerely.

Being a cop is difficult under the best of circumstances. Now it’s nearly unbearable. Police actions are under a magnifying glass and all actions are accompanied by a guilty verdict no matter what. There is one solid way to reform policing.

It’s what they want. Give it to them.