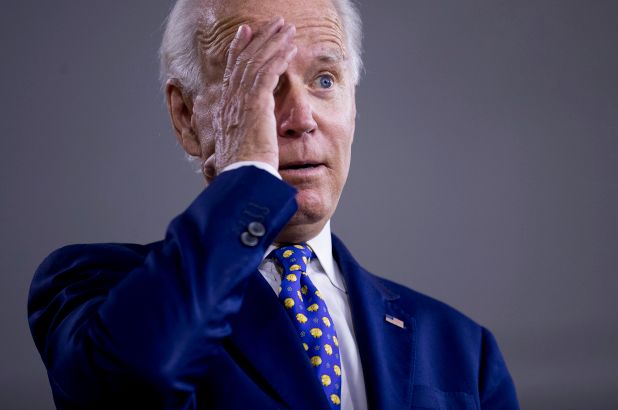 I am a huge fan of Star Trek which chronicled the journey of the Starship USS Enterprise, on its five-year mission: “To boldly go where no man has gone before.” Captain James T. Kirk was on the bridge with Commander Spock and the crew, exploring the galaxy and completing missions in the 23rd Century. Kirk was an amazing leader who exhibited courage, tenacity and charisma when confronting unknown dangers in deep space. The crew knew that Kirk loved the Enterprise, and they respected his leadership decisions. Now if the worst case scenario happened and the Klingons (enemy) were going to capture the ship, the Enterprise was equipped with an auto self-destruct system that allowed total destruction of the vessel. This was a last resort to prevent the Enterprise from falling into enemy hands. Crew members would utilize escape pods to avoid the explosion.

Stardate 74521.1. Joe Biden is Captain of the USS America and his first officer is Kamala ‘cackle’ Harris. One of the first Executive Orders that Biden issued in the Oval Office was bizarre, totally ignored by the fake media and quickly hidden from view:

Apparently, a self-destruct sequence has been activated and the USS America is being destroyed. Nobody told us. Here we are looking forward with great anticipation to the death of COVID (after receiving our fifth Pfizer shot) and the new season of The Bachelor. Now we find out that we may not have a country left. The first clue should have been the wide open border. Thousands of people are streaming into our country willy-nilly on a daily basis. Are they sick? Nobody knows. Are they violent gang members or terrorists? Nobody knows. Are they murderers or rapists? Nobody knows or seems to care. Immigrants from unknown origin are covertly shipped by car, train, plane and bus to undisclosed locations in our country and then unceremoniously dumped. When they depart their mode of transportation they are instructed to have a nice day, try not to kill anyone and be super sure to vote Democratic in the next election. Sounds like a well-thought-out plan.


Another clue should have been spending money we don’t have (28 trillion) on things that are really stupid. America prints money faster than Venezuela. The Democrats have a theory: As long as we don’t run out of ink, we can keep printing money 24-7. We’re rich, entitled and the rest of the world is stuck on stupid. We can use the funny money to replenish the empty blue state coffers which were depleted because of stupidity, mismanagement and fraud enabled by liberal mayors and governors. Likewise, we can also use the funny money to punish red states for voting Republican and send another pallet of money to Iran to secure an invitation to their birthday party. Remember, the self-destruct sequence has been activated and sooner or later the dollar is going to tank and then the rich politicians will have some explaining to do. The Democrats will simply blame Biden/Harris/Trump, retire to their stately mansions and consume $13 a pint ice cream out of their $24,000 refrigerators. 250 million Americans are going to be very unhappy when that day arrives.

Then Biden decided to grab our guns. He wants to start with those scary assault rifles, but you know in your heart of hearts that he really salivates about issuing a royal decree and empowering the Gestapo to go door to door and confiscate all of your firearms. That strategy worked wonders for Adolf, Josef, Mao, Pol and Hugo. They wisely understood that the unwashed masses would be reluctant to board a train bound for the “Happy Trails Re-Education Camp” if they had SIG Sauer P229s in their handbag, a bad attitude and extra magazines.

Most of the Executive Orders that Biden signed are intentionally designed to destroy America. The self-destruct sequence has been activated and Biden will always be remembered as the idiotic president who nuked his own country (oops). Think Yoko Ono on a massive scale. In my opinion, Biden is a useful idiot who is unaware of how badly his Executive Orders have already extensively damaged the land of the free and the home of the brave. However, Biden/Harris will be blamed for destroying America and will achieve the dubious distinction of being the worst president/vice president combo in U.S. history. That’s a fact Jack. The real traitors to this country, who devised this evil plan and manipulated Joe like a ventriloquist dummy, will hide in the weeds, let him twist in the wind and take all the blame.

Biden is exactly the opposite of Captain Kirk. At least Kirk would warn his crew that the self-destruction sequence is activated and instruct them to abandon ship. Biden is blissfully unaware of the catastrophe he has conjured up for our nation. He thinks that he is doing great because every morning all of his sycophants sing; “Hail to the Chief! Hail to the President,” and parade around his desk in the Oval Office throwing confetti, blowing kazoos and placing new Executive Orders to be signed on his desk. Joe appears confused and keeps looking for the cake to blow out the candles.

The self-destruct sequence has been activated. Do you happen to know the way to the escape pods?