Fly the Scary Skies of United 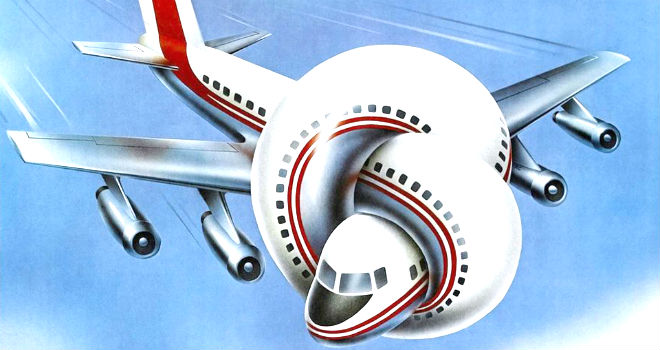 In a bold move, United Airlines declared that “diversity is at the forefront” of its pilot program and pledged that 50% of their new 5,000 pilots will either be women or people of color. You have to admire the insanity of that plan because it is so incredibly stupid that you know a liberal was involved in its conception. I can just imagine the meeting at United that birthed the concept of making flight deck diversity Job #1. Scotty woke up one morning and wanted to make some changes.

Scotty: “Does anyone have an idea of how to destroy United? I mean really tarnish our image? Come on guys and gals, lets think out of the box.” Voice #1 from the back of the room: “Why don’t we drag a 69-year-old man off of a flight after we break his nose, knock out some of his teeth and give him a concussion?” Scotty, throws Voice #1 a small pack of peanuts. “I like the cut of your jib but that was done in 2017. Remember? We overbooked the flight and needed to accommodate 4 United crew members flying to another city? We had to drag that dude down the aisle and his belly was handing out!” Voice #2 from the back of the room: “Hey lets kill some of their beloved pets!” Scotty: “Done and doner. Remember when we forced that passenger to stuff her puppy Kokito in an overhead bin and the dog suffocated? That dog had a stupid name anyway!” Scotty: “Come on folks, put your backs into it. Give me something. Voice #3 from the back of the room: “Hey, can we force a female to hold her two-year-old on her lap for 4 hours because we sold the kids seat to a standby passenger?” Scotty: “You’re killing me here folks. We already did that. Come up with something new that will really get peoples attention.” Voice #4 from the back of the room: “We could require that 50% of the next 5,000 pilots we hire must be either women or people of color.” Scotty was now excited. He was really tired of putting safety first and now, finally, diversity could play a major role in determining what pilots were qualified to set foot on the flight deck. Woke Scotty finally realized that the pilots appearance was much more important than his/her flight skills. Hallelujah!

As a passenger I think that United made a great decision. Just think of the possibilities. Denzel Washington could be the next United pilot welcoming you on the plane. It doesn’t matter if he lacks the skill set to fly a plane. What matters is the fact that he played an amazing but flawed airline pilot in a movie and really looked cool in his uniform. Okay, in the movie Denzel had a drinking problem, but so what. You know it would be trey cool to meet the dude and maybe share a pitcher of beer with him before the flight. Mindy Kaling would also be a great pilot. She is female, funny and United gets to check off two boxes on their wish list: woman and person of color. What a coup.

I do have one more suggestion for Scotty who salivates about achieving diversity on the flight deck. Why stop with females and minorities? If you want the flight deck to accurately reflect the diverse group of passengers sitting in coach, why not train old people to fly your jumbo jets? I’m 73, and I really want to be a high paid United pilot because I can use the cash to buy a new grill and I’m tired of sitting in my living room watching reruns of Firefly and eating Cheetos. I’ve got some wicked skills. I can drive a car, parallel park and most of the time remember my wife’s name. I don’t want to brag, but I really know my way around a plane already. For example, when you enter the door on the plane or hatch as we like to call it in the biz, immediately turn left to enter the cockpit which is now called the flight deck thanks to the morons behind political correctness. Passengers will love to see an old geezer at the controls. I can hear the young whipper snappers comment as they enter the plane, “Look Mommy, grandpa’s flying the plane. Did they let him out of the home to fly us?”

I could suggest another stunning public relations move. United could initiate a PAY ONLY IF YOU LAND (POIYL) incentive. Passengers will obviously become anxious when they discover that reverse discrimination and skin color were the major factors in selecting pilots. The white guy may have been the most talented pilot and flew combat missions in Afghanistan, but when the color chart is placed next to his face, Major Richard Bong’s great, great-grandson should be rejected. The new incentive, POIYL could be used to mollify those fears. Flying became boring when United transported passengers safely from point A to point B. Now, thanks to diversity on the flight deck, passengers can experience the terror of flying over Berlin during WWII. Will we survive? Will we crash? Who knows? Only the Magic Eight Ball knows for sure. Free gifts can be used to calm passengers nerves. Some airlines magnanimously insist that “… seat cushions can be used for flotation; and in the event of an emergency water landing, please paddle to shore and take them with our compliments.” What a thoughtful gesture!

Passengers can breathe easy during the landings. I’m sure that the “new” pilots will be required to successfully land at least 8 out of 10 attempts in the simulator. 80% is the new gold standard for aviation excellence. Actually, one scene from the movie Airplane! Perfectly captures the conversation before the two catastrophic failures:

On the bright side, passengers won’t have to pay for the trip. Bonus!

Let’s pray that they select only those that meets FAA standards. However, I will refrain from flying the friendly skies until suitable data proves their chosen are safe and their decision was correct.

Minority hiring usually involves lowering of standards.
Up until now pilots may NOT be on any of a LOOONG list of prescription drugs.
Will that be done away with as POC and womyn both suffer so much pain from discrimination in previous lives?
And what about strenght?
I’ve met a pilot who had to “muscle” his plane’s control stick because of some malfunction.
But womyn have to be coddled when it comes to meeting strength requirments.
https://twitter.com/Al33mK/status/1380839659991928832
Make sure you watch this video til the very end.

I had a black customer once who wouldn’t go to a black doctor because she believed that he didn’t have to be as good as others to get into medical school.
Everyone is wary of the scam when it might hurt them.
For myself, I don’t care about race, I care about ability. I’ll hire a little green man from Mars if he’s the best man for the job.

More evidence the left has no idea how reality works. Just their version of “fairness”.

I wonder if the FAA will take on the same criteria. When manufacturing and modifying airworthy products, getting FAA approval for the data used and the work accomplished is required. Will it become SOP to approve the data and work produced by specific races and genders on a percentage basis? If a certain number of white men create some engineering data and get it approved, this means that a proportional number of women and other races should have their data approved. Or, the data or work accomplished or white males should wait on approval until the required number of other interest groups get their approvals.