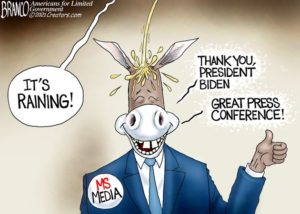 Welcome back everyone! Picking up on a trend from the great YouTuber Mark Dice, I will stop using the disrespectful phrase, “The Biden* Occupation”. Instead, I will use the more proper term and welcome you to day 73 of the Harris* Occupation! Let’s get to the latest insanity:

What could possibly go worng with this? Of course, to The Radical Leftists that have seized our government potential for abuse is a feature, not a bug

Has there ever been a tax increase on the poor that The Radical Left didn’t love?

A bit longer and more wonky than normal, but a good look at how Climastrologists lie to make their case for Gaia Worship

Can this gremlin just (copulate) off the deep end and go away already?

This week, I’m goin’ anecdotal. A little less “facts and figures” and a little more “Mark Twain after three whiskeys.”

Here’s the story of Little Robert and the Crip.

Just once, I would love to see the party that claims to be pro-woman to condemn all rapes, even when they’re committed by people of a certain religion or someone who was the US President back in the 90s.

So much for pro wrestling being one of the last refuges from The Radical Left’s woke mob. Does this mean that every old Tito Santana match will have to be deleted, or will they just have to mute out the commentary of every heel announcer?

I’ve been trying to find all of my favorite YouTubers on other platforms, and the banning of Crowder just reminds me that I need to finish sooner than later

I’ve said this before and I’ll say it again – the danger of building coalitions based on identity politics is that eventually your allies run out of other people to hate.

There are literally characters from the 2003 Bionicles movie that return more search results than Ashli Babbitt, a Trump supporter who was killed by police during the January 6th Capitol Riot. pic.twitter.com/ripRJN7Yos

Can you be sure the government will protect you?

Do you want to give up your defense to a government that, frankly, despises you?

Do you want people who call you all sorts of vile things to have a monopoly on force?

Then support the Second Amendment.

“A ‘vaccine passport’ will only be used by the state and large corporations for good, they won’t use it to gradually take more power and crush your rights, and won’t ever morph into something evil.”