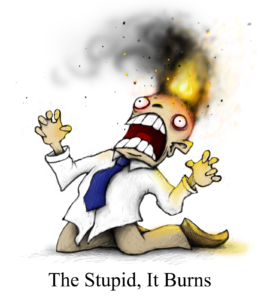 This has been a banner week for sheer stupidity. I just had to put these examples all into a single post.

Bravo’s Top Chef host Padma Lakshmi is lecturing parents on the subject of transgender children, saying they “have no business being a parent” unless they accept a child’s declared gender identity.

What else is next?

Eugene Gu (MD!) blames black on Asian crimes on, you guessed it- whites.

Black on Asian crimes only occur because of our system of white supremacy that strips African Americans of their economic opportunities while taking respect and dignity away from Asian Americans. Also, white people in power are experts at dividing and conquering to stay in power.

I certainly hope this moron doesn’t touch white people. Gu, you are

When it comes to stupid, we cannot omit CNN

CNN reported as fact on Tuesday that the meaning of “biological sex” is disputed and that “no consensus” exists for knowing a person’s sex at birth.

You have got to be kidding…

“I think it’s become clear that fairness is overrated … the idea that we should always give two sides equal weight and merit does not reflect the world we find ourselves in,” Holt said on Tuesday night while accepting an award at the 45th Murrow Symposium.

The US Olympic Committee will allow its athletes to raise their fists and take a knee against the country they are supposedly representing.

The U.S. Olympic and Paralympic Committee (USOPC) said Tuesday that it will allow athletes to kneel during the national anthem and raise their fists at Olympic trials, as the organization continues to review the decades-long policy of banning protests at the Games ahead of the Tokyo Olympics and Paralympics.

This is pure idiocy. If these ingrates so dislike their country they can go compete for someone else.

The 2005 Carter-Baker Commission was chaired by former Democratic President Jimmy Carter and former Secretary of State James Baker from the administration of George H.W. Bush. The commission’s 2005 report recommended a “photo ID system for voters designed to increase registration with a more affirmative and aggressive role for states in finding new voters and providing free IDs for those without driver’s licenses.”

This is not meant to be an all inclusive list and it is not, but it is representative of the left wing stupidity of the week and frankly, all the time. Have a great weekend.