The facts about the Atlanta shooting and anti-Asian attacks 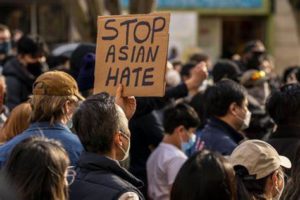 Subsequent to the horrific attack that left 8 people dead leftists could not wait to jump with both feet in the pool of projection blaming Trump despite not having a clue as to the motivation. The usual suspects- check the link for the opportunistic vultures. Here’s one from a chowder head.

Apparently the phrase “China virus” is now a slur despite its absolute accuracy. Truth is the enemy. The same is seen at PMSNBC. Entirely free of the facts about the motivation Khaleda Rahman came to a conclusion

Officials and activists have said anti-Asian attacks were fueled by Trump’s rhetoric as his administration struggled to contain the coronavirus, which originated in Wuhan, China. The former president frequently referred to COVID-19 as the “China virus” and also used the racist term “Kung flu.”

Tyler Bayless said he shared a housing unit with Long at Maverick Recovery, a rehab facility in Roswell, Georgia, between August 2019 and January or February 2020. He said that most residents were suffering from drug or alcohol addiction, but Long was being treated for sex addiction.

“It was something that absolutely would torture him,” Bayless said. He said Long was a “deeply religious person — he would often go on tangents about his interpretation of the Bible,” and was distraught about his addiction to sex.

Bayless said that on multiple occasions during his stay at the facility, Long told him that he had “relapsed” and “gone to massage parlors explicitly to engage in sex acts.”

After hearing Long was the suspect in the shootings, Bayless said he was shocked that his former roommate would do such a thing.

The accused, Robert Long, while admitting killing the victims, denied it was racial:

Long told police the shootings were “not racially motivated,” according to Baker, of the Cherokee County Sheriff’s Office. Baker also referenced Long’s “sex addiction,” saying that Long sees the spas as a “temptation” that he “wanted to eliminate.”

According to two law enforcement sources involved in the investigation, Long attempted to justify his actions when he told police he thought about killing himself, but decided instead to “help” others with sexual addictions by targeting spas.

There’s something else that bugs me. Someone named Arden Cho said

Surviving witness heard the killer shout “I’m going to kill all the Asians” shoots 8 people, 6 out of 8 are Asian. Cop says it’s not a hate crime, it’s him just having a bad day. Oh ok.. NO. It’s because you’re a racist also Jay Baker https://t.co/QdO3i2QLFU

This apparently comes from an alleged eyewitness employee named “Mr. A” who escaped unharmed. The account does not explain what was really said

A serial shooting occurred on the afternoon of The 16th at three Asian massage stations in the U.S. city of Atlanta, Georgia, and nearby Asian massage stations, killing a total of eight people and wounding one, according to a local Chinese-American media outlet, who said the suspect, a white man, was ‘going to kill all Asians’ at the time of the attack.

It sounds as if the alleged eyewitness said Long ‘would kill all Asians.” We will have to wait for the testimony- if it ever comes- to be sure.

But the left wanted to make sure they inflicted damage on Trump before the truth could emerge, which is a constant MO for them. So let’s have a closer look. 6 of the victims were Asian. Three were not. One was white.

Why would he shoot non-Asians if Asians were the target?

Damon Young is a race-baiting writer for The Root and a contributor to the NY Times. He believes white people are the “root” of all evil- this shooting included- and should be eliminated. He wrote an article entitled the “Whiteness Pandemic”

Whiteness is a public health crisis. It shortens life expectancies, it pollutes air, it constricts equilibrium, it devastates forests, it melts ice caps, it sparks (and funds) wars, it flattens dialects, it infests consciousnesses, and it kills people—white people and people who are not white, my mom included. There will be people who die, in 2050, because of white supremacy-induced decisions from 1850.

The Hill published an article on anti-Asian assault last year. It contained this paragraph

MSNBC played footage of a man violently demanding an Asian man on the New York subway move away from him. Chu condemned the footage and added that, across the nation, similar attacks have occurred, citing a man being assaulted in New York for wearing a face mask, the stabbing of three Chinese-Americans at a Sam’s Club in Texas, an Asian man in San Francisco attacked while collecting cans, and a 16-year-old Asian American sent to the hospital after school bullies accused him of carrying the coronavirus.

You can identify the race of the assailant in three of them. Hint: they’re not white supremacists. They’re not white. No word on whether they were inspired by Trump’s accurate portrayal of the virus.

Jorge Ramos wrote an op-ed article about why there is a growing anti-Asian sentiment. He cites two crimes in his article.

Suddenly, for no apparent reason, the police say, a 19-year-old man slammed into Mr. Vicha, knocking him down. He died two days later in the hospital.

Curiously, a woman was arrested as an accessory to murder. Her name is Malaysia Goo. That seems an ironic name for someone participating in an anti-Asian assault.

The assault happened in daylight directly outside the Asian Resource Center, a gathering spot for the Asian-American community. A 28-year-old man was charged in the attack.

I assure you neither was a white supremacist. Nor was either white. Now for some more facts from the FBI that are going to make some people uncomfortable and this was echoed last night by Project 21 co-Chairman Horace Cooper (about 11:30 in). This is from the 2019 DOJ National Crime Victimization Survey.

So much for the narrative.

There is no question that Asian American students face a disadvantage in gaining admission to Harvard.

The reason that it is harder for Asian Americans to get into Harvard is that their “personal ratings” (a subjective evaluation of personal qualities) are, on average, significantly lower than for white applicants. The federal judge, Allison D. Burroughs, wrote: “the Court therefore concludes that the data demonstrates a statistically significant and negative relationship between Asian American identity and the personal rating assigned by Harvard admissions officers, holding constant any reasonable set of observable

Colleges are a breeding ground for anti-Asian sentiment.

There is plenty of blame to spread around. Anti-Asian assaults are not the sole domain of any one race but these attacks have to stop.

It is a terrible thing to subjugate the truth to click bait. It is foolish to seek to be first instead of right. False reporting and accusations of racism are the worst kind of response and do nothing but further hatred.

Why isn’t the term “Russian interference” a dangerous pejorative?

Global Asian racism…Asians being racist against everyone else…can be described with one word:

White racism against Asians in America?

It’s like all the other crises the Left is fabricating: systematic racism, trans, and Biden winning an election.

The Democrat/Leftist propaganda machine needs to be destroyed.

This is an organized leftist push to marginalize whites and turn every non white race against us. This is the only way they can defeat the USA. I experience racism from an early age, a white kid living in a mixed neighborhood. The left excels at lies and rhetoric. Stand up and call this BS out.

New York Daily News covered an attack on an elderly Asian male, 82, struck so hard he’s now in critical condition.
The paper never described the attacker’s looks, just his clothing.
BUT police published a photo of this animal.
He’s (guess what) a BLACK MALE.
https://www.nydailynews.com/new-york/nyc-crime/ny-stranger-punch-manhattan-subway-20210321-itxysblgfzdqtcl27mnrvws65u-story.html

Hand it to the Daily News for trying to spin it into a “hate crime.”
Not unless you are finally going to admit that, yes, BLACKS hate and should be charged for their hate-based crimes.