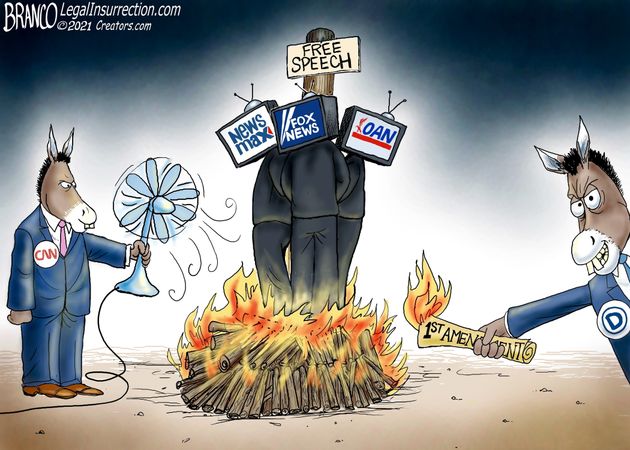 Welcome back to Day 45 of The Biden* Occupation! CPAC has come and gone, and thankfully  my concerns that The Radical Left would choose it as their next battleground to engage some psy-ops turned out to be wrong. Apparently having a Governor like Ron DeSantis probably made Florida a less appealing staging ground than DC. On to the crazy!

There was a time where I would have said that the dude confronting Acosta was an a-hole. Actually, I still would; I just don’t care. For that matter, this is how every DNC PR Flak wearing the colors of CNN, MS13-DNC, the 3 networks, NPR, WaPo, NYT, etc. should be treated any time they appear in public with a live camera and open mic. Want it to stop? Go back to being journalists.

What? The COVID bill has nothing to do with helping America, but instead is about destroying it via funding The Radical Left’s agenda? I am shocked! Shocked I say!

Although I am not looking forward to the day when some government bureaucrat demands my pronouns, I am looking forward to forcing them to write down my preferred pronouns. Which are of course, The Earl of Funk, The Duke of Cool, and The Ayatollah of Rock N Rolla!

2/28 – “Why America needs Conservatives more than ever,” Kristi Noem rocks the house at CPAC 2021 speech

Great speech, but Noem isn’t even part of the conversation for presidential candidate yet. That’s not a dig or her or anything she’s done, though. That moment comes when The Radical Left comes to fear her and we start seeing the coordinated attack pieces roll out among the DNC’s PR machine, AKA Big Tech & The MSM

This sums up where the two sides are miles apart on the 1st & 2nd Amendments – The Radical Left genuinely fears that we Normals are as nasty and amoral as they are.

Megan Fox over at PJM does some great journalism on some horrific abuse. This is the third part in a series, and while longer than most of what I post is well worth your time.

3/3 – The Cancellation Of Dr. Seuss Should Disturb You, Because You’re Next

As I keep saying, Cancel Culture ends when and only when The Radical Left starts getting cancelled on a scale to lead them to say “This is wrong – both sides need to stop!”

3/3 – THE MILWAUKEE BUCKS HAND SANITIZER CAM IS AMAZING, WHICH MEANS IT’LL BE CANCELED

This is more cultural than political, but if mocking reactionary Leftists is wrong  then I don’t ever want to be right!

3/4 – Democrats Pass HR1 To Federally Weaponize Election, Then Lockdown Capitol and Ask for 60-Day Extension of Military Troops to Protect Them

Nothing here you didn’t already know, but in a sane world this would have been the headline on evvery major newspaper that morning

Another of of our @TheBabylonBee prophecies fulfilled pic.twitter.com/1XA2AusRpc

Dude, WTF is wrong with you? You’re actually cheering this guy being locked up without bail on the same day we learn that even more charges have been dropped against last year’s BLM/Antifa rioters? Glad I cancelled my NR subsctiption after Covington – wish I’d done it sooner

LOL NRO July months after a few outlets on the Right (including American Greatness) already had been slamming Cuomo. Always leading from behind pic.twitter.com/GJVd0pZj1N

Tonight on CNN; “Is this the most diverse cabinet to bomb the Middle East?”